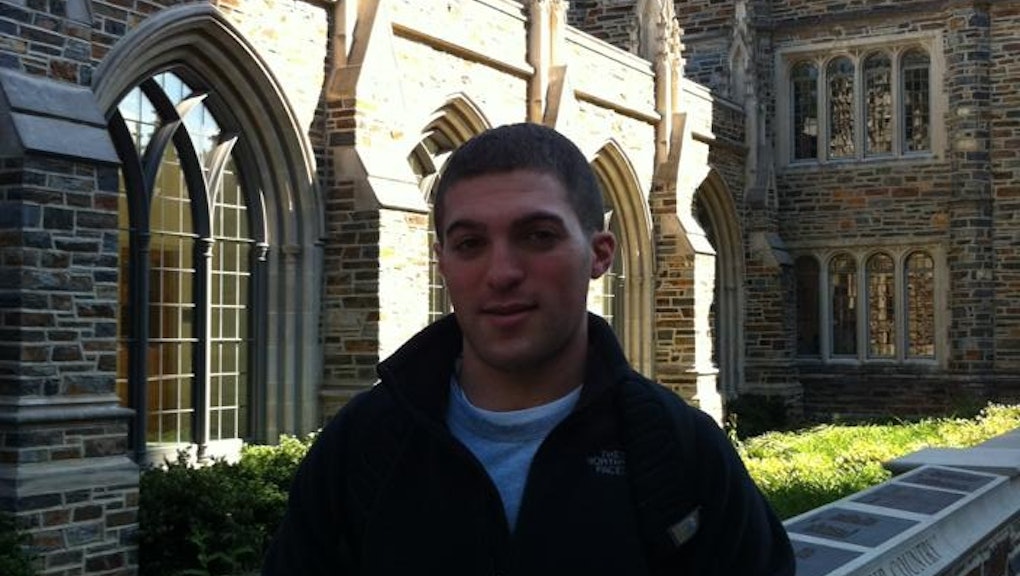 Michael Shammas was exceptionally nervous the first time he submitted an article to the PolicyMic editorial queue (weren't we all?). Now he's a seasoned pro, a breaking news writer, and, as pundit of the week, eager to discuss why having to use your real name and photo on our site is one of our best user requirements.

As part of the "pundit of the week" column, we spotlight one PolicyMic-er to share personal experiences with our community, and pose one never-been-asked question to a staff member. This week I (gasp) answer Michael's question about the origins of my experience with PolicyMic.

Caira Conner: When and why did you decide to get involved with PolicyMic?

Michael Shammas (MS): I first stumbled upon PolicyMic last year when a friend on Facebook shared an article. I remember strolling through the website, specifically the “mic” system, and thinking what a cool concept it was. Less than five minutes later (seriously) I’d already made PolicyMic my homepage. As for how I got involved, that was actually kind of spur of the moment. One day I was reading an article when I spotted a solicitation for aspiring pundits on the website. I wrote up an article, sent it in, and — what do you know—it was accepted!

CC: A number of pundits have mentioned they'd like to connect with more people interested in their particular hot-button issues. Has PolicyMic been an effective platform for your cause?  What are the advantages to using PolicyMic for your interests? Any disadvantages?

MS: One unique thing about PolicyMic compared to a website like CNN's is that PolicyMic makes users post their real names and tends to attract informed policy nuts who are interested in substantive discussions. The comments section is not dominated by anonymous trolls, but is instead a place where anyone looking to learn about policy issues would be well-advised to look.

This ability to actually engage in substantive policy discussions — something that is all too rare on the Internet — is what attracted me most to PolicyMic.

That being said, I definitely comment less than most of my fellow pundits; that’s because, due to the high quality of PolicyMic users, I usually prefer to read others’ comments — especially the critical ones on my own articles (Yes, you guys do make some good points!) — so that I can learn from people who disagree with me.

CC: You're a busy law student, but also one of our breaking news pundits. What about our platform motivates you to make time in your schedule to contribute?

MS: I’m actually motivated to write for PolicyMic largely because I am a law student. There are a lot of legal issues out there that fascinate me, yet they don’t receive nearly enough attention. For example, on PolicyMic I’ve written about the trampling of the NSA on our Fourth Amendment rights, about a youngster who was tossed into jail after a ridiculous overreaction to some comments he made on Facebook, and about the Republican push in North Carolina to restart executions. Such issues involve our fundamental legal rights as American citizens, yet they are often overshadowed by debates about some inane distraction like whether or not Miley Cyrus’ dress was too short. When these issues aren’t overshadowed, they are rationalized by our government and mainstream media. (For example, the NSA must supposedly shred the Bill of Rights because of “security interests.”)

If there’s anything I’ve learned so far in law school, it’s that the law is not equivalent to morality, and that subsequently one of the great struggles in our society has been and still is the glacial dragging up of the law to evolving standards of morality. This is where PolicyMic pundits come in.

Every article published on PolicyMic is a contribution to our national debate over what type of society we want to live in and, consequently, what sorts of laws we want to adopt.

CC: You consistently receive a high number of shares and comments on your pieces. Any tips for new pundits looking to do the same?

MS: Absolutely: Speak your mind, and don’t be afraid to be divisive! The articles you write that receive the most praise will probably be the ones that receive the most criticism as well. But that’s okay. PolicyMic is all about constructive disagreement, and the best articles are often the ones that actually get under somebody’s skin and prompt an angry response in the comments section that can then turn into a great, informative debate.

MS: Alas, when I’m not PolicyMic’-in it u,p or stuck in my room reading case briefs for Torts, I really enjoy simply hanging out with friends. I’ve also gotten involved with the Prison Legal Assistance Project — a Harvard Law student practice organization — and I hope to represent a client in a parole hearing soon. It’s not common, but sometimes American “justice” is actually injustice, and as an aspiring lawyer one of my greatest interests is how to rectify this so that the system produces justice on a more consistent basis. I can’t think of a better way to learn how to do this than to get involved with prisoners and criminal defendants who are, rightly or wrongly, suffering under the full weight of the legal system.

CC: Your turn. What's a question you have for a member of our staff?

CC: (Ah, how the tables have turned). Yes, it's true, there was a time when I wasn't here — obviously wasn't having as good a time as I am now — but before I worked at PolicyMic, I wrote for PolicyMic. In fall 2012, I was unhappily employed elsewhere and looking for a way out. I actually applied for a PolicyMic job, didn't get it, and was redirected to editor Mike Luciano and his on-call writing program. By the time my dysfunctional job fell apart for good, I was hooked on PolicyMic and determined to find a way in full-time. That initial rejection was actually one of the best things that happened to me, professionally, for two reasons: Even though I'm now a current employee, I also know what it's like to be a pundit, and can speak authentically on why writing for us truly is a good idea. I love the role I have, and this role is the culmination of efforts made from pundit to intern to staffer —it's not a role that was available when I first applied.

That said, thank you Michael, for the chance to interview you and learn more about what makes our community tick. Another reason I love my job? Because I get to write this column every week. True story.