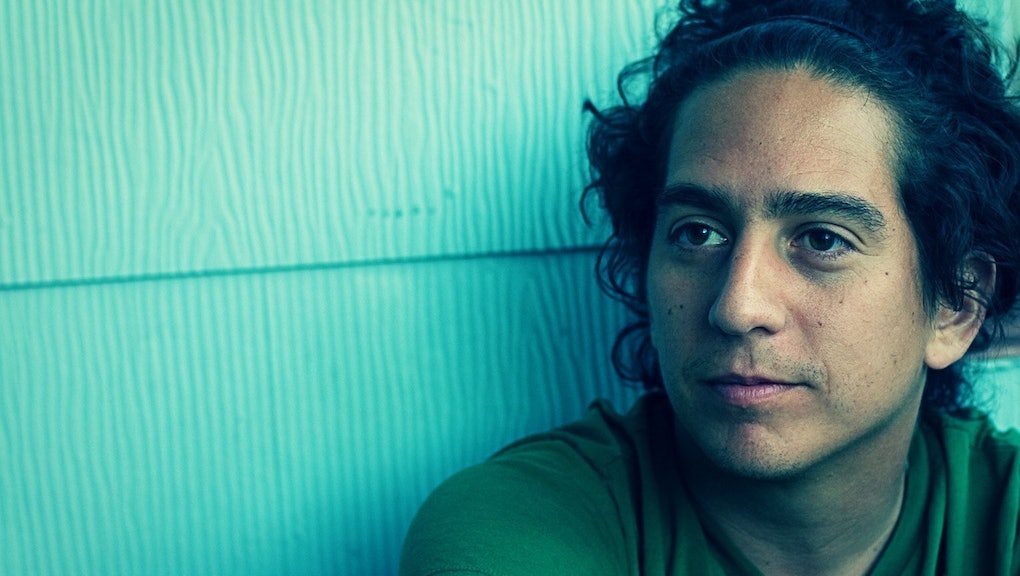 And yet, it is timely, too. Despite an almost fable-like quality, At Night We Walk In Circles captures the rhythms of our generation and pulses with the zeitgeist of this economic moment. It takes place during the post-war years of an unnamed South American country, in a time when when commercialism and material wants have suddenly replaced real fears and pressing needs. "Rubble was cleared away, avenues widened, trees planted, new neighborhoods erected atop the ashes of those leveled in conflict. Shopping malls were planned for every district of the capital." Nelson, Alarcón's protagonist, is plagued with restlessness: he feels his time is stagnant — dulled by "the narcotic effects of peace," and thus somehow less than real. It is the restlessness with which young people, frustrated by an economy in lull and stuck in jobs less fulfilling than their expensive educations promised, can all too easily identify.

Like today's frustrated youth, Nelson turns to art and wanderlust for an experience of heroism in peacetime. A recent theatre conservatory graduate, he idolizes the theatre troupe Diciembre, which, during the war, had produced a controversial play called The Idiot President that landed the playwright and director Henry Nuñez in Collectors, a fictional prison based on Lima's Castro Castro. Henry is a legend to Nelson and to a generation of youth who feel like they have missed the war: Diciembre's programs are "wrinkled and faded but bearing that unmistakable whiff of history, the kind one wishes to have been a part of." Perhaps it is just the naïve adventurism of youth, but perhaps there is also something about a city being rebuilt after war, "restored, block by block, with an optimistic eye toward a UNESCO World Heritage designation" that makes life feel more like a spectacle than a participatory event. But Nelson and his peers are not satisfied with merely being spectators. They want to be actors (on both the literal stage, and the stage of history). They yearn for a time "when a line of dialogue delivered with a chilling sense of dread did not even require acting."

Nelson will get his chance to act. Henry Nuñez is released from prison, and is convinced by his friend, Patalarga, that it will be liberating to stage a revival of The Idiot President. Nelson auditions and lands the part of the son of the President and goes on tour throughout the countryside as a member of Diciembre. But too soon he realizes that while his play-acting dreams with Diciembre have become all too real, he has somehow become a spectator to his own life. He watches helplessly as the woman he loves prepares to have a child with another man, and as his life is endangered by a great "performance" that flirts with the boundary of reality and memory. At Night We Walk In Circles warns daydreamers and voyeurs how easily spectating can slip into acting, and acting into reality. It is a lesson about getting the war you wished for, about facing the trauma and despair you once romanticized.

Perhaps the greatest spectator in the novel is its enigmatic narrator, whose identity and relationship to Nelson is not disclosed until the novel's gripping and suspenseful end. The narrator, morbidly obsessed with Nelson's story, reminds us of how we are all spectators to the tragedies of the world around us. This novel, which originated as a journalistic investigation into Peruvian prisons, also speaks to our era's mass consumption of real horror stories. When a journalist enters Collectors to interview a prisoner whom he believes to be innocent, he is asked by the prisoner to imagine that the prisoner was actually guilty. "What do you think I would do," the prisoner asks him, "to someone who was outside while I was in here, and had decided he had the right to tell my story? If I were the person capable of killing a man on a dark street?"

Daniel Alarcón is only 36. He was born in Lima, Peru, but he has lived most of his life in the United States. He has written about how frustrating it can be to negotiate Americans' expectations of the "kind of Latino" he should be. Just as in real life he refuses to conform to caricaturization, so too does his novel refuse to play into the literary-tourist sensibilities of the American reading public, which would too often devour a boiler-plate 'Latino story' while leaving the true and original ones under-appreciated. At Night We Walk in Circles is Alarcón's most ambitious and successful work yet — it not only lives up to the extraordinary promise of his first two books, but also promises much more to come from this wise and visionary young writer.