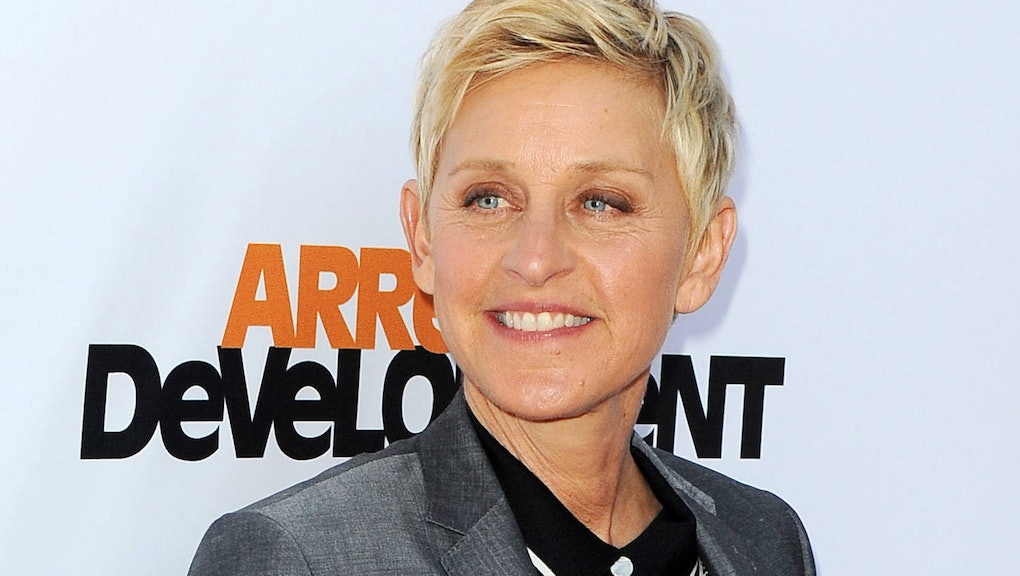 There are some serious issues in the LGBTQ world. Like, seriously. Insanely high rates of homelessness, unemployment and suicide, street harassment, fashion faux pas. But there's also the far less life-threatening but still pressing problem of queer representation on TV shows. For all us queer fangirls, Ellen DeGeneres' and Liz Feldman's potential new sitcom brings up some interesting questions.

Honestly, even without this sitcom, things are already getting better in TV-land. It's not like 1997, when Ellen famously came out on national TV. (Everybody was like, Ohmygosh you guys, famous people can be gay!?) We've got Glee's Blaine, Kurt, Brittany and Santana, Shay on Chicago Fire, and the fabulously queer cast of Netflix's hit series, Orange is the New Black. It's great, right? We've pushed past the days of token gay friend who fits all the stereotypes. Famous people can be be vague about their sexualities and it's all ho-hum.

Turns out, television might not be the big gay wonderland it's made out to be.

Personally, I've got it pretty good. As an able-bodied, cisgendered, white lesbian from a middle class family, I see myself on TV sometimes and it's pretty cool. I can base my TV-viewing habits pretty much on the following flowchart:

But I'm privileged that way.

Orange is the New Black is doing a really great job of showing people who aren't white and well off, but I want more. I want to see a black bisexual woman in a wheelchair who kicks butt at her job and has a razor-sharp wit. I want to see genderqueer folks of color who don't have a lot of money. I want a transguy with a storyline that's not just about transitioning and coming out. I want a bisexual man with Asperger's on prime time TV, and I don't want him to be a joke. I want to see a fat lesbian whose storyline doesn't revolve around weight loss as personal growth.

There's no guarantee we'll get that with this new sitcom. It hasn't been picked up yet, but Deadline.com reports that the plot will pick up with our big gay protagonista deciding to get pregnant by her straight male best friend, only to have him meet his soul mate. Awkward.

Right now, we don't know enough to say whether Liz and Ellen are going to break boundaries, but we do know they're going to be hilarious. Ellen's history as a sitcom star and talk show host is well known, and Liz has a respectable resume as writer on Two Broke Girls and star of the actually way-too-gay (or possibly just-gay-enough) Internet show This Just Out.

I have no doubt that whatever gay brain baby these two women cook up will be funny as heck. I just hope it will push barriers of queer representation on TV.