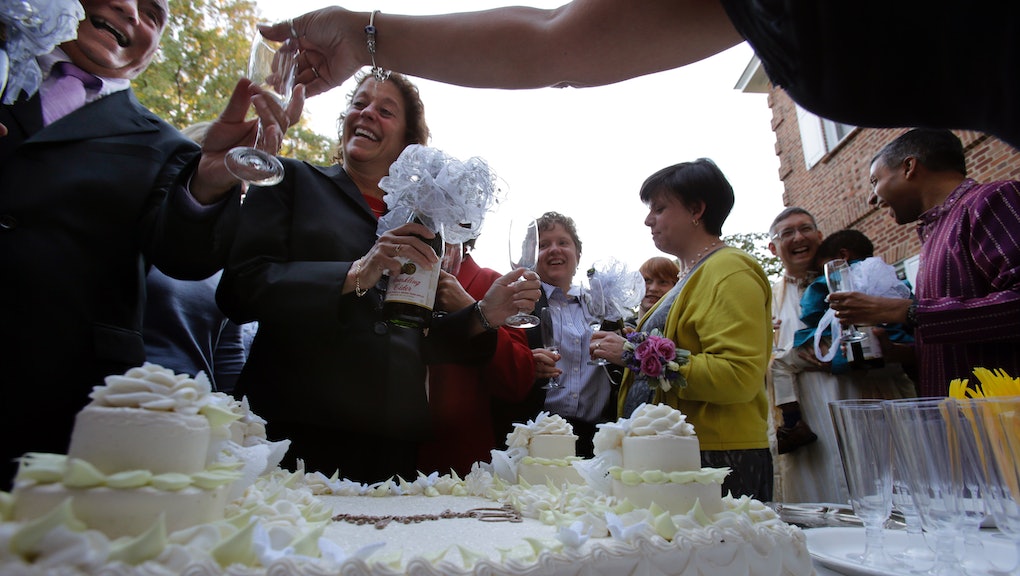 Most of Us Won't Get Married Until We're Over 35

I recently came to the slightly horrifying realization that when my mom was my age, she was married, with a kid on the way. She had known my father for three years. THREE YEARS! I’ve had sweaters for three years that I remain ambivalent about.

My parents still kiss in the kitchen while making dinner, go on a weekly date, and occasionally look at each other with dumb, lovesick, googly eyes. One day, in the far-flung future, I’d love to have a relationship, maybe a marriage, like theirs. But today I’m 23 and have lots of adventures to go on, self-exploration to attend to, and boys to kiss before I settle down with the "one."

It seems like increasing numbers of young Americans agree with me. Relationships and attitudes about marriage are evolving — where getting hitched right out of college was once the norm, it now seems, at the very least, antiquated and unnecessary. More couples are living together, having children out of wedlock, and choosing life partnerships over marriage. As the New York Times recently reported, for many queer couples — who have of course long defied American "traditionalism" — the idea of getting married isn’t attractive even though it’s more possible than ever. With divorce rates as high as they are, it’s clear that marriage doesn’t secure a happy, healthy relationship.

Despite these changes, we still live in a culture-at-large where marriage is discussed like a necessary rite of passage. For women in particular, the messaging starts when you’re old enough to know what a diamond is: a marriage proposal equals validation, and secures your place in society. Everyone from Hollywood to Cosmo to Carrie Bradshaw tells us that singledom is to be avoided like the plague, that we aren’t complete till we have a ring on our finger and some dude to make dinner for. Even as we see more people adopting "alternative" ways of being in relationships, or who are content being alone, we have a long way to go before a happily unmarried woman in her 40s isn’t seen as a sad unicorn.

In a recent piece for Slate that examined Dutch attitudes towards marriage, sex, and relationships (which are much looser than our pearl-clutching American ways), Katie Roiphe writes about the benefits of a culture where marriage is viewed as an option and not a requirement. In the Netherlands, she explains, marriage is seen as a pleasant possibility, but not marrying is not seen as a failure.

This prompts Roiphe to wonder, "If we suddenly stopped being in thrall to the rigid, old-fashioned ideal of marriage, we could stop worrying about low marriage rates and high divorce rates. We could stop worrying about single mothers and the decline of marriage as an institution ... and the wasteful industry of wedding planning." Perhaps if we focused on marriage less, we could focus on relationships, intimacy, and love — in all its forms, and in a more complete and nuanced way.

As more American youth lean towards a "Dutch-like" way of approaching relationships, it’s interesting to think of the possibilities. If we lived in an America where the attitude towards marriage was, "If you want it, go for it, if not, whatever," would sexually empowered women be less villainized? Would we stop judging "alternative" families? Would polyamory be more socially acceptable? Would we kill the myth of the "one" and talk about how more than a single person in the entire world could be good for us?

I read somewhere that people are too focused on finding the right person rather than being the right person. Though we are far from erasing the Hollywood-fueled obsession with marriage and "perfect" love, more young Americans may be on their way to moving beyond its rigid margins.