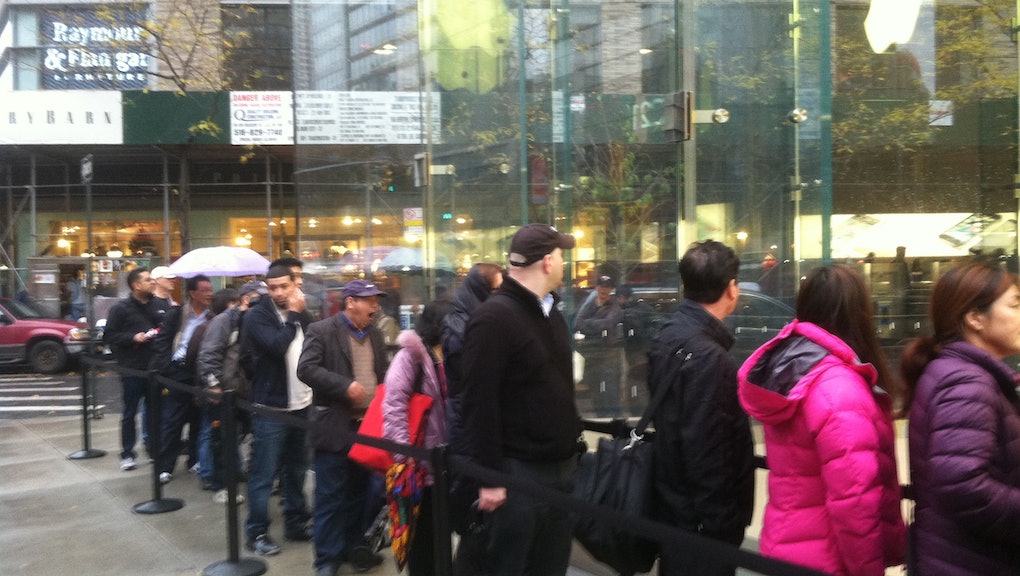 iPad Air Release: Way Too Much Fuss For 6.4 Ounces

I stopped by the Apple store on the Upper West Side this morning to see whether or not there would be a string of Apple die-hards waiting to buy the new iPad Air. I wasn't sure if I would find a huge crowd. I thought it would be empty --- mostly because I think that this is a pretty stupid product to get excited about.

It wasn't completely empty, but it was a long enough line for a rainy, Friday morning. I walked up as soon as customers were being ushered into a store full of clapping Apple employees.

Far too much excitement for a $499 product that doesn't seem to be much different from its predecessor.

I spoke to a few people in line, and they told me that they had been waiting for about an hour. One man told me that it would be his first iPad, and that he was excited to watch Breaking Bad on his new gadget.

It seems like the biggest selling point of the iPad Air is its weight: the latest Apple product only weighs one pound (a third lighter than its predecesser).

The iPad family, all together. A world of difference between these products.

Is the iPad 2 really all that heavy? My own dinosaur of an iPad weighs a whopping 1.33 pounds. I can sort of understand the appeal of the iPad Mini, small backpacks are all the rage these days anyways. But I just don't see the appeal of a lighter version of a product that was already pretty light in the first place.

It's going to take more than shaving off 6.4 ounces to get me excited about Apple products again.

Personally, I wish that Apple would stop releasing sequels to its already existing products. Between the gold iPhone and this, I'm starting to think that they've lost their touch for innovation.

Are you as bored by the latest Apple iPad as I am? Let me know on Twitter and Facebook.