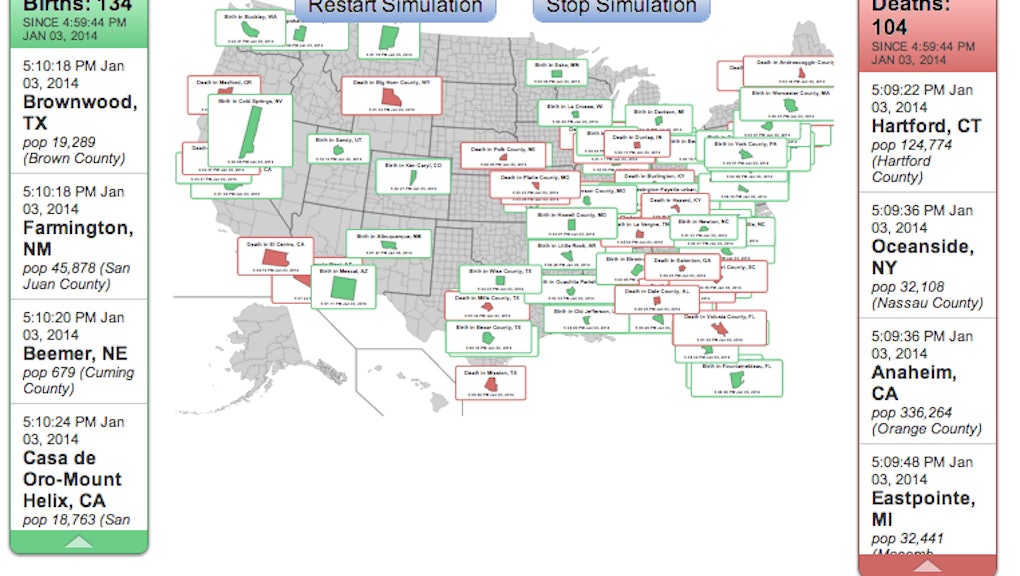 Watch Real-Time Births and Deaths in the U.S. — It's Mesmerizing, Sobering

According to new data released by the Census Bureau at the start of 2014, a person will be born in America every 8 seconds in January, and die every 12 seconds.

Brad Lyon, who holds a doctoral degree in mathematics and does software development, wanted to provide a visual of this sort of data. In 2012, he and designer Bill Snebold made this simulation map of births and deaths in the U.S.

The real-time map is a simulation, providing a qualitative view of births and deaths.

"[The map] can apparently seem to evoke a strange mixture of emotions," Lyon, the map's creator, said. "At least for me, it is a bit overwhelming and sobering, and provides some perspective on how big 300 million+ really is. However, if the rates and population counts are correct, something like this is actually happening as I type this. It's just weird."

The U.S. population is on pace to increase 44% by 2050. The American population is also getting older (just check out this simulation). As time progresses, young people will make up a smaller percentage of the U.S. population, while those above the age of 50 will comprise a larger percentage. America in 2050 will have an overall older population than it does in 2014, and far older than it had in 1960. Currently, there are about 53 million young people (18-29 years old) in the U.S., making up around 17% of the population.

America is changing, and the real-time map shows just how fast those changes are occurring.