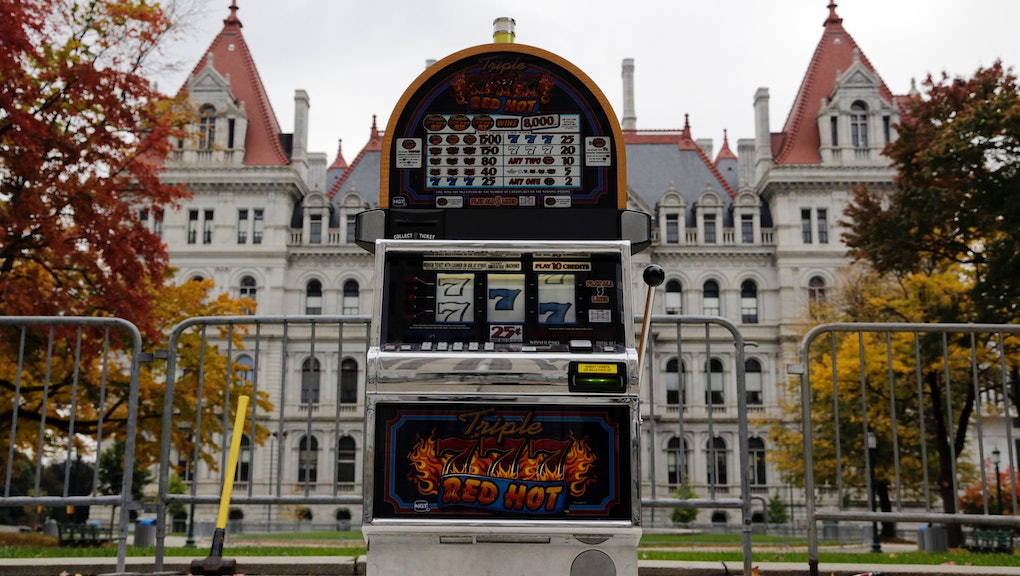 NYC Elections 2013: 6 Ballot Proposals You Need to Know About

If you live in New York state, are above the age of 18, and have enough of an interest in politics to be reading this website, chances are you'll make the trip to your local polling place on Tuesday to vote. And while Bill de Blasio might be practically guaranteed the spot as New York City's next mayor, your vote still matters.

You see, on Tuesday, you'll be asked to give the thumbs up or thumbs down on six ballot proposals to amend the state constitution. Unfortunately, unless you decide to buckle down and spend time parsing the NYC Campaign Finance Board's website, many of the issues presented may be hard to understand and even harder to vote on.

Lucky for you, we've put together this neat guide to this year's ballot proposals so that tomorrow you can explain with confidence to your friends and family what "Exclusion of Indebtedness Contracted for Sewage Facilities" means.

The lead proposal, whether or not to allow casino gambling in New York, is the most controversial of the six issues you'll be presented with. Proponents of legalization claim that casinos will promote job growth, increase aid to schools, and increase revenue to local governments, thereby allowing for decreased property taxes. Opponents of the measure argue that casinos exploit the poor, attract crime, and lead to social problems like gambling addiction and prostitution.

Basically, this one comes down to regional geography. Certain economically depressed upstate towns, like Nichols, N.Y., see casinos as the gateway to a financial boom. They hope to attract Las Vegas-style megaresorts with the potential for investments in the hundreds of millions of dollars, according to the New York Times.

On the other hand, not all residents want to see New York become the next Las Vegas. And even if you do enjoy the occasional game of blackjack, as the CFB points out, the measure "would have minimal short-term impact downstate because casinos would not be developed in New York City and nearby counties for at least seven years."

This one isn't nearly as complicated as it sounds. Basically, Prop. 2 seeks to close a loophole in the way New York law treats benefits for disabled veterans. The system is based around civil service credits, which veterans receive after completing military service. The more credits you have, the greater the pension you're entitled to. If a veteran is certified as disabled, he or she receives twice as many credits from civil service exams as a veteran with no disabilities.

Here's the loophole: If a veteran is certified as disabled after taking the exam, he or she will not receive the additional credits. It's one of those small procedural matters that nevertheless has a significant impact on the lives of certain citizens. If you believe that the state already gives adequate benefits to disabled veterans, you might consider voting no on Prop. 2.

The state constitution limits the amount of debt that counties, cities, towns, and villages can incur. Since 1962, debts incurred for the construction or reconstruction of sewage facilities are exempt from these debt ceilings. Prop. 3 seeks to continue this policy for the next 10 years. It would allow municipalities to maintain a high degree of financial leeway to ensure that their sewage facilities are up-to-date, but it also trusts that they'll keep sewage management-related expenses under control.

Under the state constitution, the land within the Adirondacks must be kept "forever wild," not subject to private ownership. For over a century, however, both the government and private individuals have laid claim to certain parcels of land in Long Lake, Hamilton County.

If Prop. 4 passes, the legislature will settle the dispute by giving up the land to the private owners. In exchange, the state will receive a certain amount forest land that it deems to be "of greater value," which will be added to the Adirondack Park. Vote yes if you trust the legislature to resolve the dispute on its own. Vote no if you don't, or if you believe the state should not set the precedent of ceding public land to private ownership.

Proposal 5: In Relation to a Land Exchange in the State Forest Preserve with NYCO Minerals, Inc.

This proposal's name is so snappy, I could have sworn it was the title of the next big summer blockbuster. Just kidding.

This is another land dispute related to the "forever wild" law. The state wants to allow NYCO Minerals, Inc., a private mining company that operates a mine adjacent to the forest preserve, to expand its operations onto protected land. The state wants to allow NYCO Minerals, Inc. to do so, provided that the company transfers back to the state at least the same quantity of land with a minimum value of $1 million. Also, when mining operations are done, the forest land is to be returned, in its original condition, back to the state.

The issue presented in Prop. 5 is a bit tricky. The measure would be the first swap of Adirondack Park land undertaken for private gain, which, depending on your perspective, might set a bad precedent. Furthermore, it's hard to imagine that the land in question will be returned unscathed. Lastly, the CFB acknowledges that "NYCO... could mine at an alternate site two miles away called Oak Hill." On the other hand, NYCO's current mine only has a few more years of expected life, and the proposal could reportedly save more than 100 jobs in the area.

Proposal 6: Increasing Age until which Certain State Judges Can Serve

This last proposal is relatively uncomplicated. Currently, State Supreme Court judges must give up the gavel and gown when they are 76, while Court of Appeals judges must retire at age 70. If ratified, Prop. 6 would increase the age limit to 80 for justices from both courts.

The measure would allow the most experienced judges to remain on the bench for longer, and proponents point to the four justices on the US Supreme Court who are over age 70 and "have showed no signs of slowing down."

Critics of Proposal 6 argue that it creates a two-tiered system where statewide judges can retire later than judges in local and specialized courts, whose current retirement age of 70 would be unaffected. Some claim that Governor Cuomo wants this measure to fail so that some Republican judges will be forced to retire at 70, at which point he can replace them with Democrats in an FDR-style "court-packing scheme."

Now that you're armed with the knowledge to make an informed decision about the six ballot proposals, use this poll site locator and be sure to cast your ballot on Tuesday!