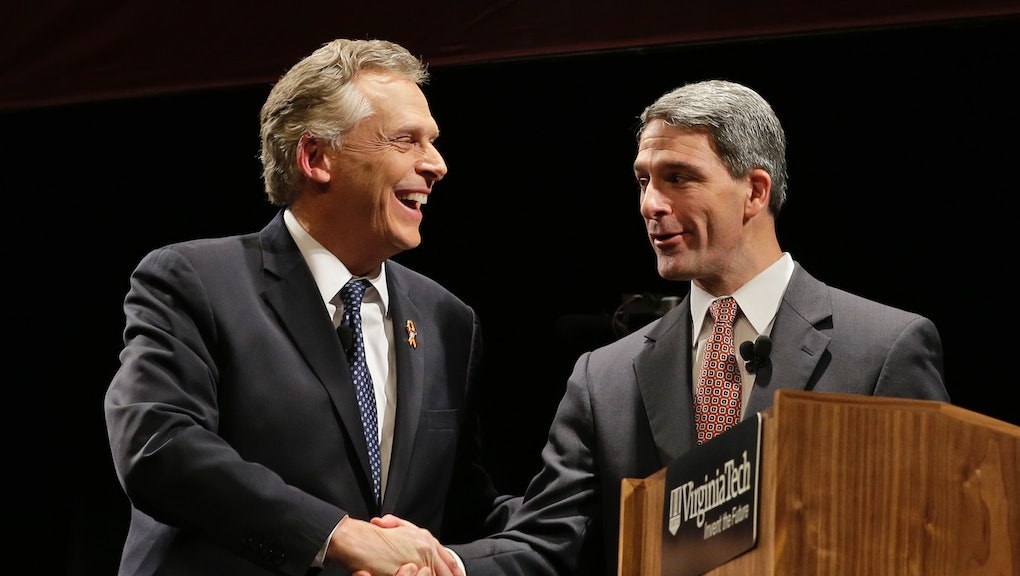 On Tuesday, Virginians head to the polls to elect their next governor. Unfortunately, whether Republican Ken Cuccinelli or Democrat Terry McAuliffe wins, the state of Virginia will lose. Over the course of three debates, McAuliffe accused Cuccinelli of being a dangerous ideologue, and Cuccinelli accused McAuliffe of being a self-interested beltway insider. Say what else you will about them: they’re both right.

McAuliffe, a long-time left-wing fundraiser who’s never held office, has consistently led Cuccinelli, a former state senator and Virginia’s current attorney general, in polls since July. However, both candidates have negative favorability ratings; the people of Virginia don’t support McAuliffe, so much as dislike him a little bit less. Even newspaper endorsements of McAuliffe, from the Washington Post’s to the Richmond Times-Dispatch’s, have read more like mixed reviews.

While Cuccinelli is an experienced elected official, he’s used his time in the attorney general’s office to grandstand on issues both internal to the state, and wholly external to it.

In 2010, the year that he took office, Cuccinelli got right to work. He sued the federal government in an attempt to bar the cornerstone of the Affordable Care Act, the individual mandate to buy insurance. The case was later dismissed on appeal, after it was found that the state of Virginia — and, by proxy, Cuccinelli — lacks the jurisdiction to block a federal law.

He also took a stab at what he charmingly refers to as the “homosexual agenda” when he advised Virginia’s universities that they should strike language barring discrimination based on sexual orientation and gender identity from their school policies. Cuccinelli also used the courts to hound and attempt to discredit a climate scientist named Michael Mann (Cuccinelli is a climate change denialist), and submitted an amicus curiae brief in support of SB 1070, Arizona’s inherently discriminatory immigration law.

And that was just Cuccinelli’s first year in office.

Then there’s the McAuliffe. While McAuliffe served as a masterful fundraiser for former President Bill Clinton, the chair of the Democratic National Committee from 2000 to 2005, and a chair of Hillary Clinton’s 2008 presidential campaign, he hasn’t spent a single day as an elected official. The inexperienced McAuliffe is so dedicated to shilling for his chosen candidates and party that, as he bragged in his memoir, he nearly missed the birth of his daughter, was kicked out of the delivery room during the birth of one son, and left his wife and another newborn son in the car on the way home from the hospital in order to pop into a fundraiser. Given what he skipped out on, one wonders what family events he did bother to participate in.

When McAuliffe isn’t abandoning his family to gladhand, he keeps busy by making questionable business deals. Cuccinelli has zeroed in on McAuliffe’s time as the head of an electric car company called GreenTech Automotive, which is under investigation by the Securities and Exchange Comission for participating in a visa program but failing to deliver promised jobs. Perennial insider McAuliffe has also been called to account for richly profiting from a telecommunication company called Global Crossing, which went bankrupt shortly after McAuliffe sold his shares in it.

Over the course of the campaign McAuliffe and Cuccinelli have gone out of their way to distance themselves from one another, airing attack ads and criticizing each others’ economic plans, but unfortunately for the people of Virginia, they haven’t been able to shake the one fatal flaw they share: they both suck.