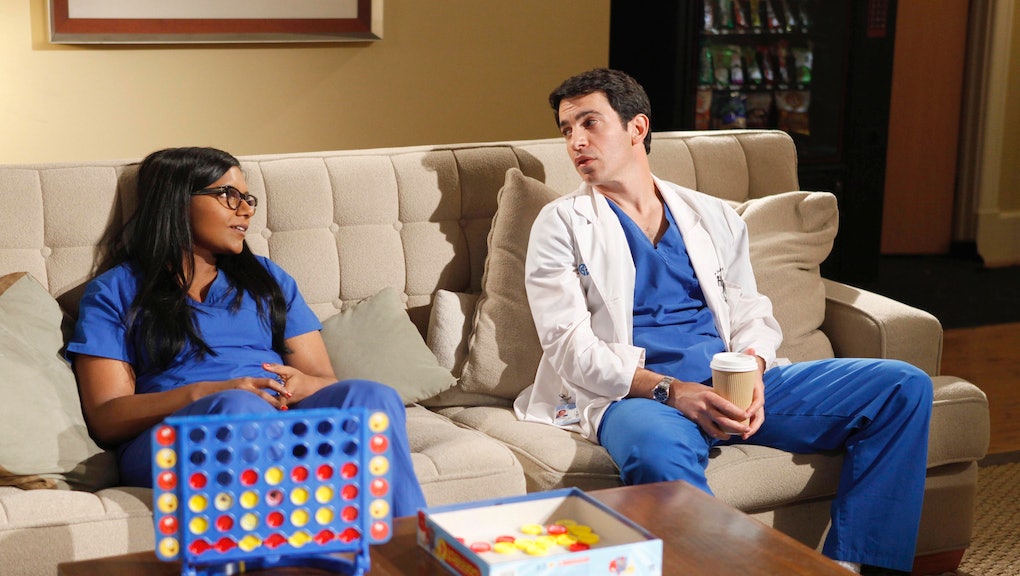 According to the Associated Press, the Affordable Care Act is about to make its big break.

No, the problems with Healthcare.gov haven't been fixed yet. But a private foundation named the California Endowment is spending half a million dollars to "ensure TV writers and producers have information about the Affordable Care Act that can be stitched into plot lines watched by millions." The organization is hoping that the health plan will receive the kind of meaningful product placement usually reserved for such venerable brands as Doritos and Heineken. The initiative is particularly targeted at young people, whose enrollment is essential to the success of the Affordable Care Act.

The California Endowment insists that it will cede full creative control to the writers and producers to whom it's reaching out. As such, here's a look at how a few of our favorite shows might promote the government's health plans.

Fat Schmidt returns, but not as a flashback. Feeling depressed after breaking things off with both CeCe and Elizabeth, Schmidt eats all of his feelings, and then some. Fortunately, thanks to the Affordable Care Act, Schmidt is eligible for gastric bypass surgery. Before the show’s end, attractive-but-mean Schmidt is back!

Meanwhile, Zooey Deschanel has a manic episode, and she takes her character, her costars, and her ukulele along for the ride.

Winter is finally here, and all of Westeros has the flu. Maybe the Lannisters should have spent a little less time paying their debts, and a little more time instituting affordable health coverage and easy access to maesters and other specialists. On the bright side, it turns out that the White Walkers were merely suffering from a vitamin D deficiency. Once they breach the Wall and make their way down to Dorne, leaving only death and waste in their wake, they become much more personable.

The season opens with Don Draper in a sun-kissed medical office in Los Angeles, as an attractive young blonde nurse with a period-appropriate paper hat takes his blood pressure. Across the well appointed room, a stylish silver-haired doctor leans back in an Eames lounge chair. Don is diagnosed with lung cancer, cirrhosis, syphilis, and narcissistic personality disorder. He decides the best treatment is taking a long drive up the Pacific Coast Highway and ignoring the needs of his children and wife. His poignant journey into the sunset serves as a reminder that sometimes, it's better to seek preventive care.

After a daring week of liberating one-night stands across Bushwick, Hannah Horvath is diagnosed with not one, but two sexually transmitted diseases. Feeling overwhelmed by her fate (but not by her easy access to affordable antibiotics) Hannah makes a pillow fort in her living room, but opts to spend the day in bed, gawking at photos of nose jobs. Jessa visits Hannah, tells her to "suck it up," and then describes that time in Thailand when she contracted three STDs and a botfly infestation. Shosh says, "Gross!"

It’s 2014, and with the advent of the Affordable Care Act, Shulman’s Women's Health Associates is overwhelmed by an influx of new patients. Mindy decides to compete with Danny and Jeremy to see which ob-gyn the new pregnant women prefer. Mindy kits her office out with hot pink throw pillows and bowls of fun-size candy, and is convinced that she'll win. It turns out that no matter what she does, the women prefer James Franco, who isn't even around.

The Affordable Care Act arrives, and walkers are covered! A group of scientists identifies the pathogen responsible for zombification, and cures the walkers one by one (including a cameo by a zombified Kathleen Sebelius). The show stops being about horror and survival, becomes a tale of readjustment to society after trauma. As life normalizes, the show devolves into one long, boring shot following Rick Grimes as he putters around his house, doing "things" and "stuff."