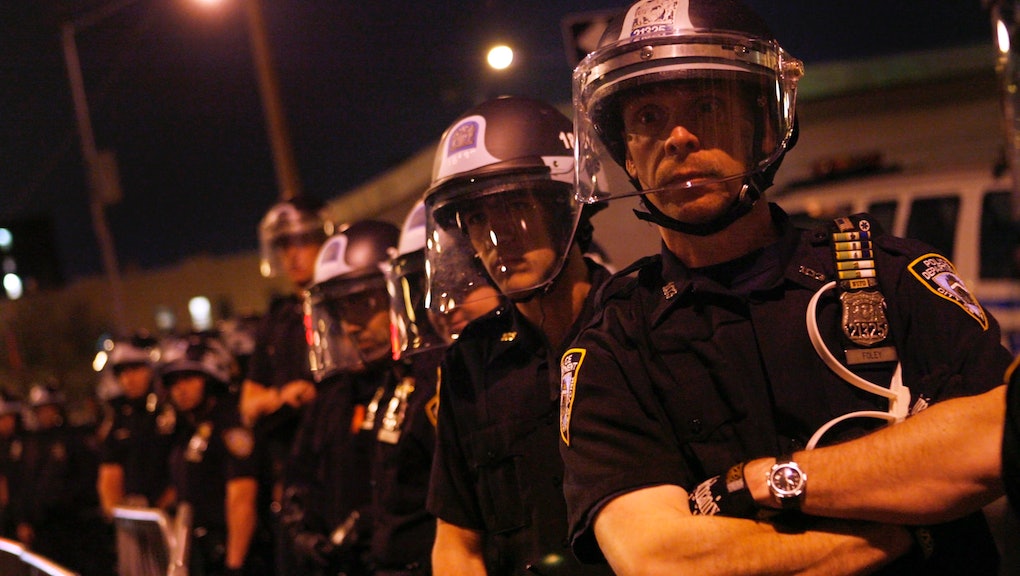 PolicyMic's lead story yesterday carried the alarming title "Did New York Just Make a Big Mistake?" And of course, this supposed misstep is the election of Bill de Blasio (a Democrat!) as mayor of New York. The article's author, PolicyMic editor Laura Dimon, ponders whether crime will rise under de Blasio as a result of an allegedly "liberal" tendency to go soft on crime. Specifically, de Blasio's criticism of the NYPD's "stop-and-frisk" policy is cited.

I normally avoid wading into the city politics, but, while Dimon's well-written article provided some memorable anecdotes (including a former NYPD officer who thinks that "liberals here in the city deserve what they're going to get"), I felt an urge to respond as I found her analysis of New York's falling crime rate to be overly simplistic and oddly partisan. The truth is, the verdict's still out on the causes of the precipitous decline of crime in New York over the past two decades, and neither "get-tough" conservative policies nor efforts at repairing "broken windows" tell the whole story.

For convenience, let's start off by addressing Dimon's claim that New York's dramatically declining crime rate "was an anomaly." She cites Malcolm Gladwell, who writes that in 1994, after Mayor Rudy Giuliani appointed William Bratton as head of the NYPD, "Suddenly and without warning... [New York's crime] epidemic tipped. From a high in 1990, the crime rate went into precipitous decline." Notably, Bratton led a crackdown on the "above-ground equivalents of turnstile-jumping and graffiti."

But on a completely contradictory note, Mother Jones blogger Kevin Drum posted a piece published on the same day as Dimon's titled "No, Crime is Not Going to Start Soaring under Bill de Blasio" in which he writes:

"Lots of big cities have seen drops in their violent crime rate. At least three others — Chicago, Dallas and Los Angeles — have seen declines as big as New York's. Others, like Phoenix and San Diego, now match New York's crime rate. They did this without Giuliani and Bloomberg. They did it without CompStat. They did it without broken windows. Hell, even New York did it for four years without these things: Its crime rate started plummeting in 1991, long before these reforms showed up."

Whereas Gladwell traces the dropoff to 1994, Drum points out that it actually began in 1991 — well before Bratton's appointment.

But most importantly it seems that the crime drop off in New York was no anomaly. Instead, it was part of a larger national trend. Here's an illustrative graph, posted to Drum's blog:

In July, The Economist observed that this is actually a trend of global proportions, affecting several wealthy Western states since the 90's.

"Both police records (which underestimate some types of crime) and surveys of victims (which should not, but are not as regularly available a source of data) show crime against the person and against property falling over the past ten years in most rich countries. In America the fall began around 1991; in Britain it began around 1995, though the murder rate followed only in the mid-2000s. In France, property crime rose until 2001 — but it has fallen by a third since. Some crimes are all but disappearing. In 1997, some 400,000 cars were reported stolen in England and Wales: in 2012, just 86,000."

Here's a nice illustration they provide:

So what exactly is going on here? The Economist articles cited above argue that a murky confluence of factors could be at work which have almost simultaneously affected many cities including New York. Among The Economist's long list of potential causes for the crime rate drop-off, aging urban populations, gentrification, more technocratic policing, technological fixes (e.g. car alarms, car immobilizers, DNA databases, bullet-proof screens, etc.), and high incarceration rates are cited — none offering an entirely conclusive answer to the question at hand.

As for the argument about the effect of "get-tough" policies in New York City, the issue of incarceration is particularly relevant. On one hand, the number of people incarcerated in the city "peaked around 23,000 in 1993 and has been falling steadily since" along with the crime rate "to around 12,000 people today." That correlation gives lie to the idea that tougher policy necessarily leads to lower crime rates. Similarly, Canada, Estonia, and the Netherlands have all reduced incarceration while reducing crime.

On the other hand, with 12,000 people incarcerated, New York City still has a terrifyingly high incarceration rate of 474 inmates per 100,000 residents. If it was an independent country, the city's incarceration rate would be ranked 11th highest in the world (far higher than rates in not-so-democratic states like Honduras, Zimbabwe, Iran, and Saudi Arabia, for example).

So, maybe one could make the case that in spite of a falling incarceration rate, New York still has a "tough" enough incarceration policy to play a role in deterring crime. If there's truth to that argument, it's still immensely problematic. Is trading a crisis of criminality for a crisis of mass incarceration much of a solution to rampant city crime? I don't think so; and certainly not when there are potential alternatives available.

The article in question suggests that opposition to stop-and-frisk is predominately a phenomenon among voters too young to remember "the sheer hellhole that was New York."  But in truth, the policy, as it is, is unpopular among New Yorkers in general — with slightly more opposed to the policy in its current state, than in favor according to polling.

Rather than voter ignorance of New York's crime-ridden past, the widely opposition likely has to do with the shortcomings of the policy:

"The fact is that only 0.2% of stops yield guns. Further, guns are more likely to be found on white suspects who are stopped, yet about 90% of the stops are of minorities."

For a longer, data-laden critique of stop-and-frisk see this informative Guardian article.