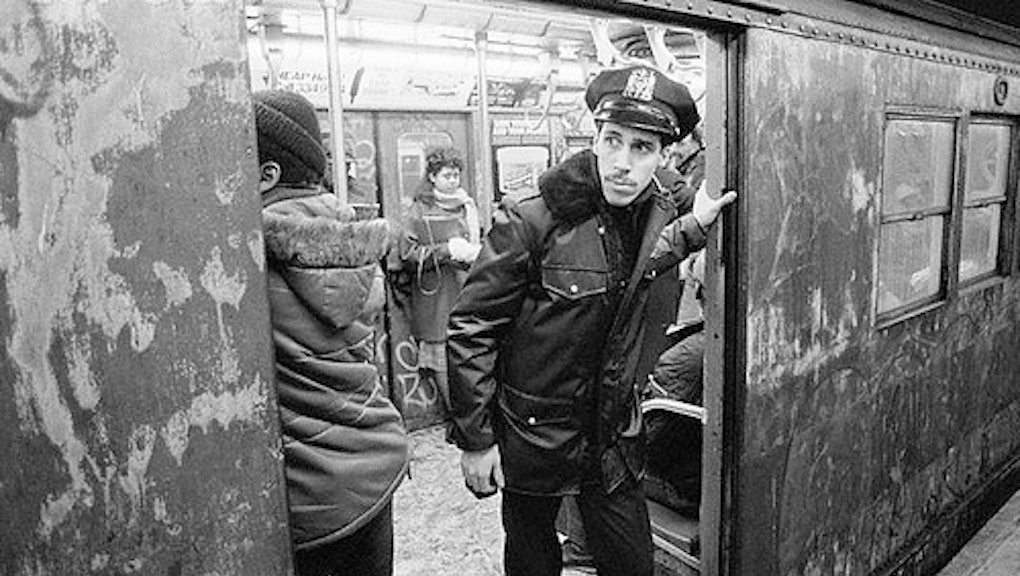 "There’s about 20 or 30 kids outside my building right now [arguing and starting to fight]. Someone's going to bash someone's head in. You’re going to hear a shot soon. I know that for a fact."

Glenn Terrell, 54, was listening from his South Bronx apartment on Tuesday night, predicting the imminent gunfire matter-of-factly, almost nonchalantly. To Terrell, a former member of the Black Spades gang, it was nothing — at least compared to the Bronx of the 80s and early 90s. "I used to be in the street, so I know," he said. "You couldn’t walk into the Bloods’ neighborhoods in red. They’d get you."

There is a saying that goes, "A conservative is a liberal who’s been mugged." New Yorkers might have just made that joke an unfortunate reality. The city will have a liberal mayor for the first time since 1993, when David Dinkins passed the office to Rudy Giuliani. As a recent New Yorker article read, "New Yorkers seemed to be ignoring Lhota’s warnings that a de Blasio victory would return their neighborhoods to the days of rampant crime."

The fact is, the sheer hellhole that was New York is no longer in the memory of many young millennial voters. Bill de Blasio's rush to condemn Stop and Frisk and present a new approach to public safety takes the city's history and drastic improvement for granted. Some NYC voters might prove to have forgotten it as well.

Sean MacShane, 48, was a police officer in the crime-ridden South Bronx for 19 of his 22 years of service. In the late 80s and early 90s, he said, the city streets were "indescribable," a "bloodbath," and pure "mayhem." Much of the anarchy tied into one simple fact: "Crack was king." The 44th precinct was clocking in 90-100 homicides per year — and that doesn't include all the non-fatal shootings, he said.

I already know cops that are saying, 'I ain't doing nothing anymore.'

Michael McGovern, 60, was a New York City police officer from 1980 to 2007. "Maybe some of your peers should ask their own parents just how fucked up the city was during the 70s and 80s," he said. "[This] place was like Dodge City."

Malcolm Gladwell, in his book The Tipping Point, writes that New York City during the 1980s "was in the grip of one of the worst crime epidemics in its history."

But now, the 44th precinct is reporting about 16 homicides per year, according to MacShane. And when it comes to crack, Terrell said, "You don’t hear too much about crack … Nobody is makin’ no money off crack."

When Rudy Giuliani was elected mayor in 1994, he appointed William Bratton to head up the NYPD. Gladwell writes, "[Bratton] instructed his officers to crack down on quality-of-life crimes: on the 'squeegee men' who came up to drivers at New York City intersections and demanded money for washing car windows, for example, and on all the other above-ground equivalents of turnstile-jumping and graffiti."

"Suddenly and without warning," Gladwell writes, "the epidemic tipped. From a high in 1990, the crime rate went into precipitous decline." It was an anomaly, especially because New York City was not improving economically at the time; if anything, people were suffering from cuts in welfare. But Giuliani credited the broken windows theory, the idea that, "If a neighborhood or city doesn’t fix its broken windows and graffiti, the environment will continue to descend into crime, chaos, and violence."

At times, I think the liberals here in the city deserve what they're going to get.

Some attribute the drop in crime to the "get-tough" policies of Giuliani's administration. McGovern said, "Giuliani did start this dramatic reduction and has continued up until today."

MacShane and McGovern express concern about de Blasio's policies on crime. MacShane said, "Under liberal mayors, you held back. Under Dinkins it was a hands-off policy unless it was in your face. Giuliani came into office and it was simply: 'Get the bad guys.'" MacShane remembers when Giuliani was elected and a chief from the new administration stopped into the precinct and said, "Listen, we have your back … It’s a different time now."

MacShane said of de Blasio taking office, "I already know cops that are saying, 'I ain't doing nothing anymore.'" McGovern had similar concerns. "At times, I think the liberals here in the city deserve what they're going to get. I hope I'm wrong, but my instincts say otherwise." He warned, "Just watch for some subtle changes on the street."

One of the biggest points of debate when it comes to street safety will be the controversial Stop and Frisk law, which allows officers to randomly stop, question, and pat down anybody looking "suspicious." It's largely been argued that the tactic simply uses racial profiling. On de Blasio’s website, it says, "Bill de Blasio will sign legislation to end racial profiling."

MacShane said on targeting minorities, "Nothing could be further from the truth." In fact, he was more inclined to stop white people in the bad areas. McGovern said, "Stop and Frisk, in my opinion, is a very effective tool. Take a look at the vast majority of violent crime and see that it's minority on minority." He continued, "But you're going to have a real tough time convincing the left that stop and frisk is anything other than racial profiling." He warned, "Watch crime rise after January if the courts don't uphold the city’s side of the argument in the federal courts.”

We used to say, just become a cop for one year, and you’ll know what I’m talking about.

The arguments against stop and frisk are understandable. But when MacShane was a cop, "If there was an argument, somebody's dying." He went on, "We used to say, just become a cop for one year, and you’ll know what I’m talking about." He thinks that by the end of de Blasio's term, "You'll see a substantial increase in crime."

He added that many minority groups in bad areas are supportive of the police and the Stop and Frisk policies because it keeps them safe. "You’d be surprised how conservative the minority groups are," he said. But they’re not vocal, because helping or backing the cops is a major no-no. Even still, MacShane remembers people whispering to him under their breaths, "Good to see ya, glad you’re here."

Ramon Garcia, 38, was frisked in the Bronx during a trip to the candy store trip with his mother and grandmother when he was 16 years old and didn't speak any English. He said it was scary and embarrassing but that overall, he is in favor of the policy if it means keeping the streets safer.

Similarly, former gang member Glenn Terrell, when asked if stop and frisk was a good policy overall, said, "Oh yes, oh yes! … Stop and frisk is a good thing, if done the right way," and if targeting the right people. Terrell has even been giving tips to an officer recently about a group of drug dealers he sees every day.

Terrell, of all people, knows the power of stopping one gun. His son, Glenn Terrell Jr., was shot to death outside of a nightclub in 2008. He was just 27 years old.