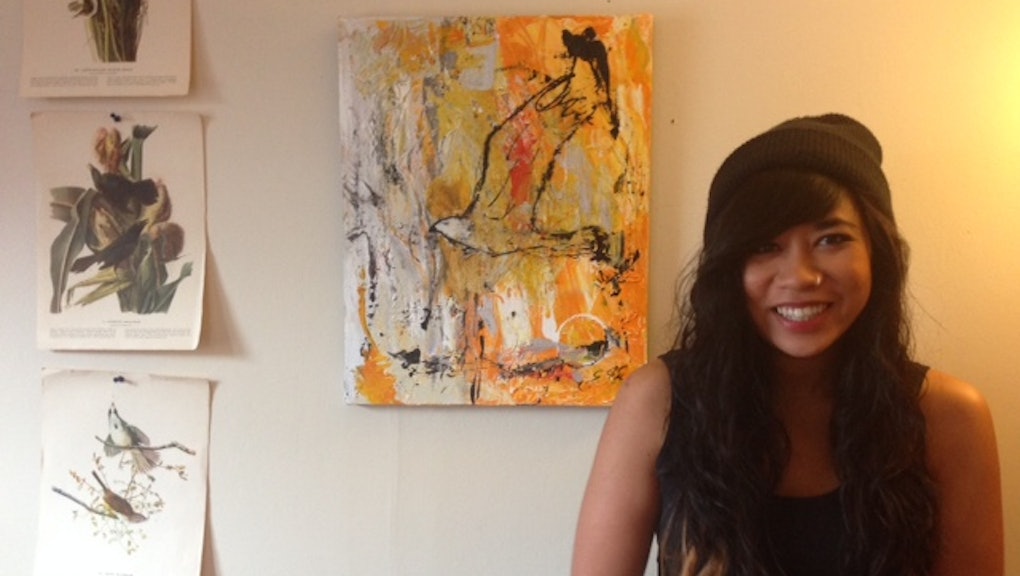 Senti Sojwal claims her wildest PolicyMic dreams have already come true (see below re: a story on Hanna Rosin), but we have a feeling good things are just getting started for this identities writing superstar.

Who is Senti Sojwal? She's an India-born, NYC-bred reproductive justice activist, and PolicyMic's pundit of the week.

As part of the "pundit of the week" column, we spotlight one PolicyMic-er to share personal experiences with our community, and pose one never-been-asked question to a staff member. Identities editor Sam Meier addresses Senti's question about what it means to reject the feminist label.

Caira Conner (CC): First things first, when and why did you get involved with PolicyMic?

Senti Sojwal (SS): I got involved with PolicyMic last summer while interning with NARAL Pro-Choice America in Washington, D.C. My good friend and colleague, Natalie Smith, was writing for PolicyMic on feminist issues. I read her stuff all the time, and PolicyMic became the place I looked for compelling news and culture analysis — it was so refreshing to see a youth-powered, youth-focused media network. Building on my experiences with journalism and political activism in college, writing for PolicyMic seemed like a natural step to take as I started my post-grad career. So far, it’s been fantastic.

CC: You've written extensively on the merge of sex, sexuality and politics for our identities vertical. What motivates this particular hybrid of interests? Any advice for like-minded millennials wanting to cover the same topics?

SS: As a young feminist working in the reproductive justice movement, I feel like I’m continually exposed to the multiple, ever-changing ways in which issues of sexuality, gender, and reproductive health affect young people. Being around a lot of amazing educators through my college career and my current job has taught me how intersectional these issues are, and how little you can untangle sexual health from racial justice from queer rights. I think my experiences as a second-generation immigrant and woman of color, paired with the radical education I was lucky enough to receive, provided me an interesting vantage point to engage with a lot of these ideas and how we, as young, politically-conscious actors might work to challenge dominant frameworks.

The advice I give to like-minded young people wanting to write about sexuality and politics is this: Don't see your focus as narrow. It’s not just issues blatantly related to sexual health or gender that expose how we’re conditioned to see the sexes in a binary way, or sexually empowered women as shameful, or queer populations as deviant. Cultural, political, and social messaging is an undercurrent in almost everything we consume — it’s up to us to see how these ideas are manifested in not-so-obvious ways, and dismantle them.

PolicyMic became the place I looked for compelling news and culture analysis — it was so refreshing to see a youth-powered, youth-focused media network.

CC: What is one thing you wish you could change about your user experience with PolicyMic? Why?

SS: There’s not a whole lot that I would change, I think the site is pretty user-friendly. I would love to be able to search through and see all the writers who may be living in a certain area, or who focus on particular issues (i.e. immigrant rights, prison justice). Also, I’d advocate for more real-life PolicyMic meet-ups for people who don’t currently live in huge cities —I’d love to hang out with some of these great writers!

CC: If you could pick one fantasy outcome to result from your having used PolicyMic as your platform, what would it be?

SS: I must admit that the day my piece on Hanna Rosin made it to Feministing’s “Daily Feminist Cheat Sheet” I was pee-your-pants excited. Along with exposure as a young writer, I would love for my PolicyMic experience to sharpen my abilities as a feminist critic and help me articulate political ideas in an accessible, open way. The best outcome of all, of course, would be to change someone’s mind, to have unlikely readers genuinely engage with and respect feminist perspectives.

SS: Work takes up a lot of time right now. On a given day I’m doing anything from facilitating an environmental justice workshop to brainstorming fundraising ideas to organizing a political panel. I’ll be in Austin later this week for a conference, where I’m so excited to meet social justice and feminist activists from around the country. When I’m not working, I love going out dancing, attempting to become a whiskey connoisseur, going to shows, reading everything I never had time for in college, and trying the Eggs Benedict at as many Pioneer Valley brunch locales as possible. I’m thinking a bit about new adventures to begin when my fellowship is over in the spring — I have some dreams of more international travel, running away to California, and eventually grad school.

CC: Your turn. What's one question you have for a member of our staff?

SS: My question is for my amazing Identities editor, Sam Meier. I’m seeing a lot of prominent women who have championed gender equality openly rejecting the label of “feminist”, painting it as a man-hating, gender-essentializing movement. Many women of color see feminism (in its Western iteration) as a movement for white women. As a progressive feminist writer who embraces the term, what are your thoughts on the stigma of the label and what do you see as your role, or the role PolicyMic writers could have in this conversation?

Sam Meier: Firstly, I want to state openly that there are very, very good reasons not to call yourself a feminist, particularly for women of color. (Loretta Ross can offer a better explanation of the history of "women of color" than I can.) It's important to keep in mind that feminism is many things: a socio-historical lineage with multiple actors, a body of critical social theory, a political and social mass movement. "Feminist" is an umbrella term used to signify all of these, and more. It's highly misunderstood, and heavily fraught, as writers like Susan Faludi and Audre Lorde have documented. There has always been disagreement and dischord within feminism. Many of the contemporary criticisms of mainstream feminism, like #solidarityisforwhitewomen, echo long-standing, real conflicts within feminism.

I choose to call myself a feminist because I want to affiliate myself with the social history of feminism, despite its multiple and obvious failings. My family -- with my breadwinning mother and stay-at-home dad -- would simply not have been possible before second-wave feminism. My life would not be possible without this continuum of action and thought. I invoke it to pay homage to what people before me have done in the name of equality, a concept I hold dear despite my belief that it's fundamentally impossible.

I'm not of the mindset that people who do call themselves feminists should go around convincing other people to adopt the label. You won't find me sharing links to sites like "Am I a Fucking Feminist?" or telling people that they need to choose different choices to be "real" feminists. (With the possible exception of conservative "true feminists" like Christina Hoff Sommers, because really? Way to adopt a mindset that ignores, you know, all of history.) It's not my place, and it's not my job to convince people to label themselves in a particular way. My job, as Andrea Grimes put it, is "1) Do minimal harm; 2) Do a fuckload of good."

That being said, I do think it's worthwhile to ask people what they know about feminism, to ask them what they think it means to be a feminist, what their interactions with feminism have been like. Feminist histories have been suppressed, alongside other histories, and it's worthwhile to me to be an educational resource, and to be identifiable as such.

PolicyMic writers in the Identities section have the obligation and the responsibility to use what they know to express what they see to be true, whether it's about feminism or not. So do all writers. Writing is an act that allows you to understand who and what you are, and how you came to be. Feminist history affords me the same opportunity; it does not afford everyone that opportunity. I don't expect all my writers to be feminists. I do expect all my writers to engage with the world truthfully and with integrity.

CC: Senti, you're an amazing member of this community, and shining example of the voices for which our identities vertical was created. Thank you!