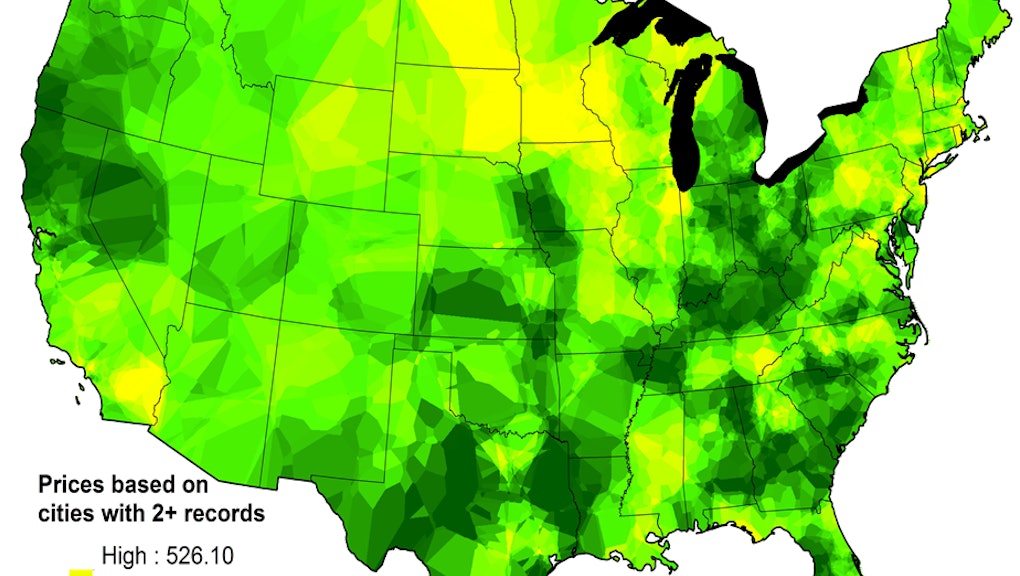 How Much Money Could America Make Off Of Legal Marijuana? Check This Map

Keeping marijuana illegal is possibly keeping billions of dollars out of the economies in the most rural parts of the United States, preventing these regions from banking on America's "biggest" cash crop.

We've seen the economic power of legal pot. On January 1, when recreational weed became legally available to Colorado consumers, 24 pot shop owners across the state believe they collectively made more than $1 million in a single day of business. Residents can currently purchase up to an ounce of marijuana at one time for recreational purposes. Non-residents can purchase up to a quarter ounce. State officials expect up to $578,000,000 in first-year sales revenue, as well as $67 million in tax revenue, which will be used to build schools and fund regulatory efforts.

But how much could marijuana sales net if legalization went national? There are a variety of estimates, but when you put them all together you get a range of $10 billion to more than $120 billion a year.

Weed would be the biggest cash crop. For comparison, the market for brewed beverages (i.e. beer) in the U.S. is a little over $100 billion. Some studies claim marijuana is the biggest cash crop in America easily exceeding the combined value of corn ($23.3 billion) and wheat ($7.5 billion). Wowza.

Some states would see a massive payday. The map points to some massively interesting trends. Cost rises as one moves east from the Pacific Coast (with Oregon being the cheapest). There are also pockets of maximum affordability around where marijuana is produced, notably in Northern California, Eastern Kentucky, and Western Tennessee. Price also varies based on your city, with the cost generally spiking the larger the urban area you live in.

The map confirms other research: Kentucky, for instance, is reported to be a major center of marijuana production in the U.S. More so, it paints a picture of a complex marketplace that has failed to be fully tapped.

Just think how much money Kentucky, Tennessee, and California are missing out on.

It's bizarre that such simple economic analyses on this product don't exist, especially since it's estimated that the legal marijuana market is poised to grow faster than the smartphone market. Not even experts on Wall Street study this market.

So why has no Wall Street economist charted the price of marijuana like this?

As the authors of the Floating Sheep blog who compiled this map can atest: "Underground economies, by their nature, are extremely challenging to analyze and study. They tend to be characterized by a lack of empirical data, unresponsive and secretive research participants, and difficult research environments."

But as the authors further point out, understanding the trade in illegal drugs is of critical importance. Recreational drug consumption is a widespread practice, and there are significant health and policy issues involved with this market.

Primarily, there is the current question on weather the government's "war on drugs" is more wasteful than beneficial. Enforcement costs about $40 billion per year. Since it was heavily ramped up by President Nixon, it has cost nearly $1 trillion.

Most Americans believe marijuana shouldn't see such a dramatic crackdown. Since the mid-1990s marijuana legalization has received outspoken support from within the medical community and more recently by the business community. Marijuana has slowly seen support for its legalization among the general public outgrow opposition.

In 2013, 52% thought that marijuana should be legalized with 45% opposed. According to Pew, this is an 11-point jump from 2010, where 45% thought it should be legalized and 50% opposed legalization. 2010 was when Proposition 19, which would have legalized marijuana in California, was defeated 53%-46%. And of course this is a dramatic swing from 1969, when nearly eight out of 10 Americans were opposed to legalization.

In October, support for legalizing marijuana grew to its highest point ever among Americans, according to Gallup.

Finally, there is the simple fact that no one has ever died from a weed overdose. This comes as other "sin" products does more harm to a body. According to the CDC, alcohol is the third leading lifestyle-related cause of death for the nation, directly associated with 88,000 deaths a year. Drinking produces unintentional injuries, violence, sexual misconduct, and alcohol poisoning. Not to mention the enormous physical costs of alcohol abuse.

Colorado might just be the start of a national legalization trend that is reaching a tipping point.

The green is rolling in Colorado. So why not the rest of the country?