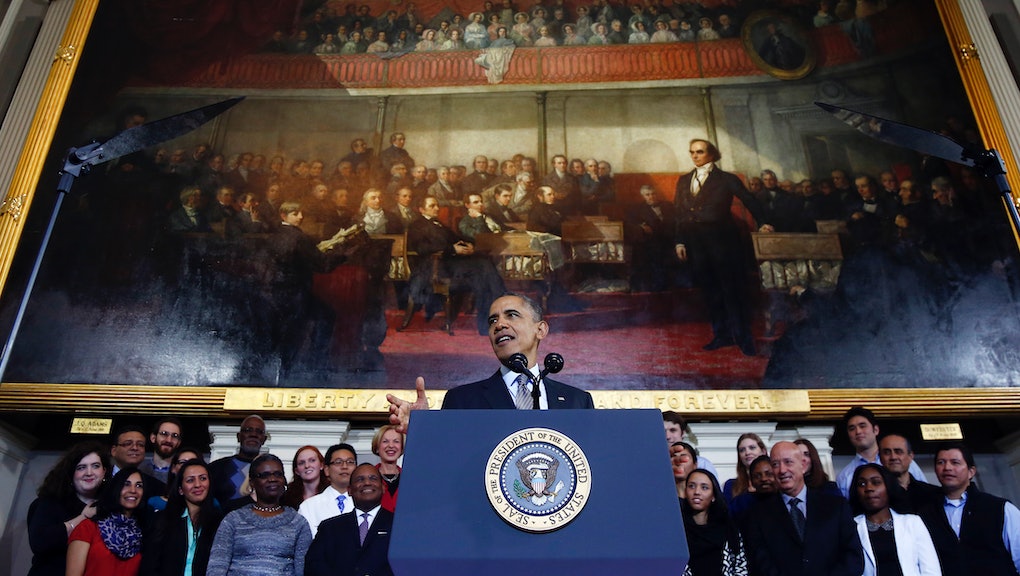 Just weeks after defeating the "extreme" Tea Party elements of the Republican Party that refused to increase the debt limit and fund the government, President Barack Obama is now helping to reinforce the Tea Party's belief that government is too big.

After all, look at how careless the government has been with its very own top priority.

From the beginning of Obama's presidency, providing affordable health insurance was at the top of the administration's list of nice things to do to make the universe a better place. This wasn't forced on Obama by some prior administration. His administration adopted it willingly and enthusiastically, and criticized anyone who opposed it.

And then Obama's team promptly bungled it in a number of ways.

First, the president pledged that Obamacare wouldn't disrupt coverage for people who already had health insurance. But he knew, all the way back in 2010, that many people in the individual market would face significant changes in their coverage, changes that would not have occurred if not for Obamacare's passage. Instead of having the decency to tell everyone that the pledge wouldn't be kept and giving people time to figure out what to do in case they lost their coverage during Obamacare's rollout in 2013, Obama kept trumpeting the same misleading pledge.

Not only is the "you can keep your plan" pledge gone, so is the "your premiums will go down by up to $2,500 a year" pledge. (Imagine if a private company didn't live up to its advertising like this.) They jury's still out on that other prominent pledge: that Obamacare won't add to the deficit.

Second, despite having several years and hundreds of millions of dollars, Obama's administration failed to put together a functioning website. Heathcare.gov was unable to handle even a small fraction of the tens of millions of people who Obama said want health insurance but can't afford it. The website is still not working as it should. Some people were driven to healthcare.gov because their earlier insurance plan was cancelled, only to find that a new plan costs more or that the Obamacare website doesn't work in the first place.

Third, although some people in the Obama administration knew that the website didn't work, that information didn't reach anyone in time to delay the website's introduction and come up with a "Plan B" (such as taking applications by phone only). Even worse, no one even told the president in time to stop him from going out onto the White House Rose Lawn in front of millions of people to plug a defective website.

While the president says he's angry about and sorry for these failures, he never admits that he's the one who's responsible for them. Nowhere does he confess that he was dishonest or that he put together an utterly incompetent team. Nobody gets fired, the president is just angry and sorry without any consequence. ("Dear IRS: I didn't do my taxes. Rest assured, nobody is madder and more frustrated about this than me." I wonder how that would go over?)

It's like the Great Leap Forward — in kind, though certainly not in degree — in which the Chinese Communist Party implemented a horrendous five-year-plan and then took so long to admit that it wasn't working that tens of millions of people starved to death. Again, Obamacare isn't anywhere in league with the atrocities of Mao Zedong and his Great Leap Forward, but the abject refusal to own up to blatant failure is very much the same.

And that's what people dislike about government intervention. Of course we want police and firefighters and a court system and such, we don't want anarchy. But we don't want to be ruled by people who won't admit to being dishonest or people who won't admit their own mistakes, no matter how glaring. Because when a company screws up, you ditch them and find another one. When the government screws up, you're stuck. There's no alternative service provider you can go to.

That's why many people would rather have a smaller government. And President Obama is doing a marvelous job of making that argument.