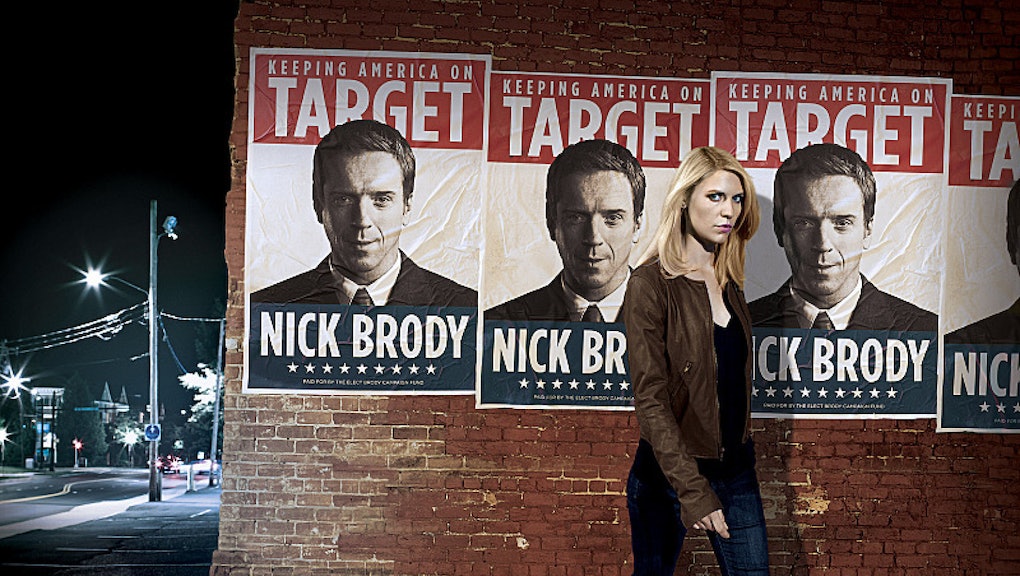 Something's different about Homeland this week. Those who saw last night's episode noticed it too. There was no crazy Carrie moment to report. The big reveals were not implausible bullshit. Everything felt … organic, introspective, morally ambiguous. And no Dana or Jess. Can it be? The show has just redeemed itself after half-assing it all season. This is an episode that goes back to Homeland's deep, twisted roots.

Fara is questioning Javadi in the CIA safe house with Saul watching nearby. Javadi, irked that he's being interrogated by — gasp — a woman, starts arguing with her and she begins to retort. Saul instructs her to leave the room and commences to unveil his master plan: send Javadi back to Tehran as a spy. What choice does Javadi have? It's either be hung in Iran or come back as a covert informant.

Back at Javadi's dead ex-wife's house, police try to make sense of a seemingly random homicide until someone arrives with a grainy picture of Quinn on the house's porch. Dar Adal quickly catches wind of the blunder and confronts Quinn at his house. Adal is infuriated by Quinn's silence on the matter, and starts to get territorial and, dare I say, fatherly, as he expresses his right to know Quinn's dealing — after all, he trained Quinn and taught him everything he knew. Quinn won't budge though, and he directs Adal to speak to Saul on the matter.

Since she wasn't spotted leaving the murder scene, Carrie goes to the ex-wife's house and asks a cop friend if he can close the case. As she's about to speak to the detective, Carrie sees one of the bodies on the floor and proceeds to rush to the bathroom and vomit. Now, we can safely assume Carrie is pretty much desensitized to a scene like this. Very likely, the camera's focus on the body was a subtle sleight of hand to distract us from the fact that Carrie may indeed be pregnant this time. It's no longer just positive pregnancy test-pregnant, but visible pregnancy.

Cut back to the interrogation room, Saul and Javadi have a heavy chat on how we all lash out because we realize we're never really in control. To Javadi, this means funding terrorist acts and killing his ex-wife and daughter-in-law. To Saul, it means hiding behind his job and acting distant with Mira to veil his crumbling marriage. And, like most great Homeland episodes, the theme in the scene can be interwoven into the fabric of the entire episode: Adal will do anything to be a part of the inner circle; Fara is shaken by her inability to stop Javadi from flying back to Tehran; Quinn has moral pangs of guilt for doing the CIAs dirty work with no substantial payoff.

Carrie, post-bathroom-break, returns to her cop friend and the detective, who inform her that they need to speak to Quinn before they can proceed. She has no choice — she goes to inform Saul, who's getting ready to send Javadi to Tehran by plane after guiling him into working as an informant. Javadi drops the ball and tells Saul that Brody wasn't responsible for the bombing. Well, shit. Too late for that news — the guy's in Caracas, feeding himself heroine in a dirty cell, chastised by a lanky pedophile. "Naughty, Naughty."

Okay, there's no Dana or Jess this episode, but we are fed something equally frustrating. Mira calls Saul — who is freaking happy for the first time since who knows when — after "meeting" with her "friend." Romping with a stranger in their bed and then calling your husband out of guilt, without even giving yourself time to catch your post-coital panting? Really Mira, can't you at least take a few deep breathes before going all phone-sex operator on Saul?

Carrie takes Javadi to the plane, where Javadi once again spills the beans about Brody's innocence. He teases Carrie with the identity of the real bomber. The teasing doesn't last very long: at the runway, Javadi discovers that Bennett, his lawyer, is the mastermind behind the actual bombing. A great reveal, but, unless it's part of his game, Javadi must be the least-secretive terrorist in the history of television. What happened to clamoring for control? He could have at least manipulated Carrie into doing something for him before revealing all this game-changing info. Oh well.

Luckily, we move on to a much more stubborn and impenetrable human obstacle: Lockhart. Saul meets with Adal and Lockhart to finally detail his plan. Naturally, Lockhart, with that greedy lust in his eyes, attempts to backhand every iota of information Saul reveals. Adal calmly watches them from the corner.

Lockhart attempts to call the president to get the plane grounded, but instead — in what has to be the most gratifying scene of this season — he gets locked in a CIA conference room by Saul and Adal, who's finally seen the light of Saul's logic.

Why do I hate Lockhart more than Javadi? I know Javadi is indirectly responsible for hundreds of deaths, but Lockhart's ecstasy post-verbal-backhanding is much more anger-inducing than the actions of a homicidal Kramer.

And poor Quinn: confessing to his ex-wife and daughter-in-law's murders to get the case closed, and then actually feeling relieved for something he didn't do in the first place. How much more CIA bullshit can he take? Apparently, quite a bit more, since he agrees to help Carrie prove Brody's innocence.

Overall, a very solid episode, marred only by Javadi's infantile willingness to reveal everything. But hell, these sorts of reveals were in dire need by episode seven.