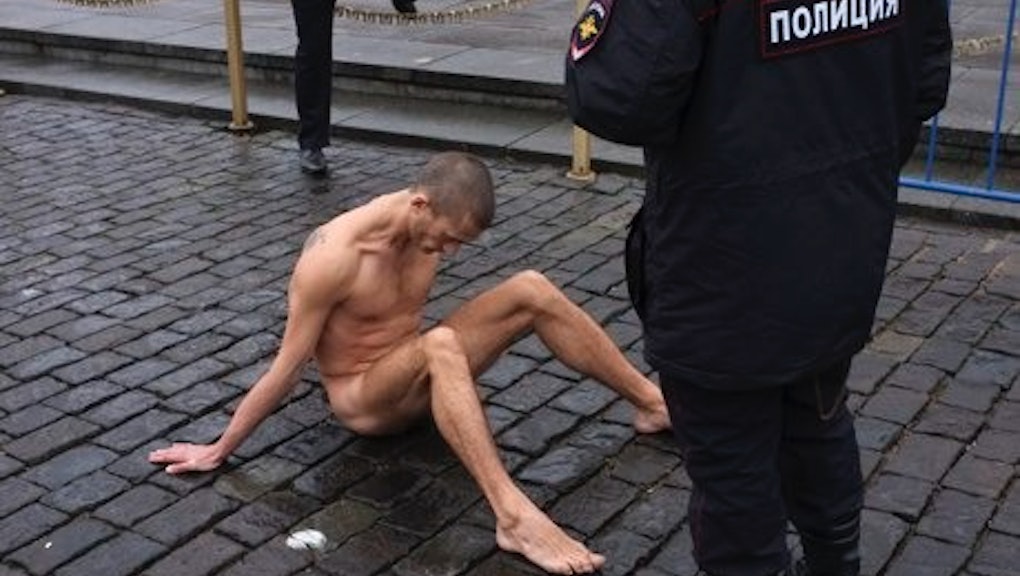 We often bemoan the political apathy of our generation, but if the new political engagement is what Pyotr Pavlensky did in a protest in the Red Square, maybe we should find a middle ground.

Now, I'll be the first to tell you that I don't understand performance art. I also don't understand anything about modern art. So when Pavlensky nailed his testicles to the Red Square in what he called "a metaphor for the apathy, political indifference and fatalism of contemporary Russian society," I was left confused and feeling sympathy pain.

Pavlensky's protest fell on Police Day, which Russian law enforcement celebrated on Sunday. The man has a history of self-destructive political statements, including sewing his lips shut to protest Pussy Riots jail sentences (I get that one), and wrapping himself in barbed wire Cactus-Jack style to protest "the existence of a person inside a repressive legal system." Pavlensky could be jailed for up to 15 days for his actions. Could you imagine an advocacy group in the United States going this far to protest growing police state actions?

If the artistic intent was a little unclear, his motivations aren't: the growing power of the Kremlin and the lack of public dissent in Russian society. Here in the United States, what is the furthest we go to protest growing NSA police state surveillance on Americans? Some of us write it off as a necessity in a global fight against terrorism. Some of us go as far as wearing Guy Fawkes masks and holding signs in public locations. But most of us do pretty much nothing at all.

Maybe those of us from the United States don't face the crushing repression Pavlensky and his countrymen do every day, but we do face a staggering government-mandated surveillance problem. This protest was graphic and doesn't make a whole lot of sense to a guy like me, but we could certainly use this level of passion in fighting for a restoration of our Fourth Amendment rights here at home.