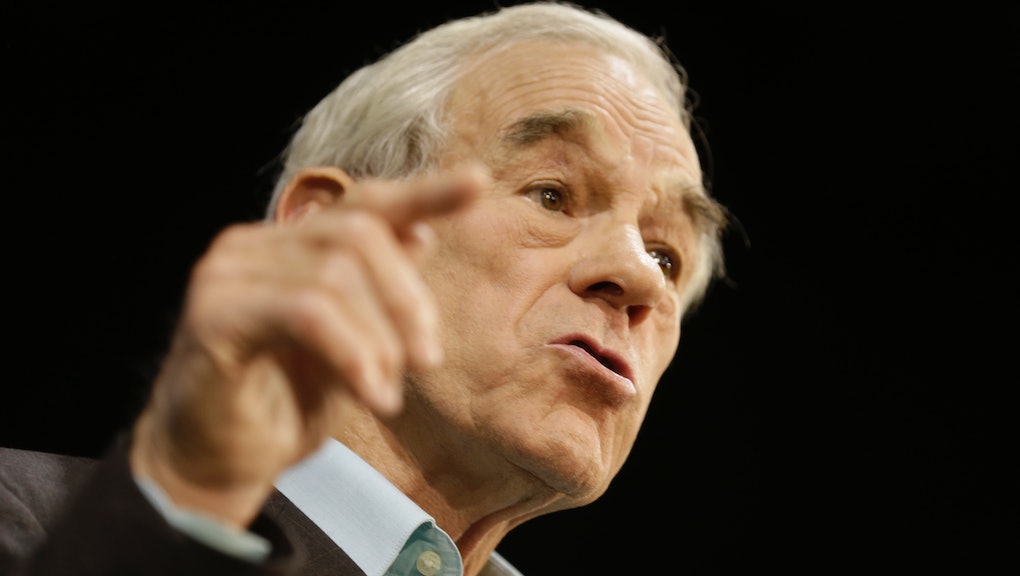 Double Down, the new book on the 2012 presidential election by John Heilemann and Mark Helperin, falls short in one way that has been overlooked by the media. While it contains nifty insider tidbits about Barack Obama, Mitt Romney, and other major players from that epic political battle, it overlooks one man whose influence may prove as lasting as the others — Texas Congressman Ron Paul.

Believe me, I’m not writing this as a diehard Paulbot (as one of my more controversial comic articles on this site can attest). While I agree with some of his views on social and foreign policy, his zealotry for the gospel of Austrian economics, regular distortion of American constitutional history, and disturbingly cultish following are all significant turnoffs in my book. Like him or not, however, the historian in me recognizes that he had an enormous – and most likely lasting – impact on the shape of American politics. To overlook this fact in a work meant to chronicle the 2012 election is downright negligent.

Allow me to explain with an analogy. One of my favorite historical elections is the Nixon-Humphrey-Wallace contest in 1968, thanks not only to its unusually high melodrama (this was the year of the Lyndon Johnson renunciation, the Tet Offensive, the Martin Luther King assassination, the Robert Kennedy assassination, the Chicago Democratic Convention riots .…) but its role as a milestone in the integration of radicalism into the mainstreams of both major parties. This had little to do with the major party nominees themselves, as both Republican candidate Richard Nixon and Democratic candidate Hubert Humphrey were moderates representing the center-right and center-left, respectively. Instead the lasting ideological influence came from the fringes; on one extreme was third-party candidate George Wallace, who managed to bring racist politicking into the post-civil rights legislation world by coding it in ultra-rightist rhetoric, and on the other were the New Leftists who either supported Kennedy or Eugene McCarthy’s presidential bids or conspicuously “dropped out” of established politics altogether. Although there had been forces pushing both parties farther to their respective extremes before 1968 (such as Barry Goldwater’s doomed Republican candidacy in 1964 or the radicalization of college campuses throughout the 1960s), 1968 was the turning point year. When Wallace picked up 13.5% of the popular vote and 45 electoral votes, President-elect Nixon and future Republicans realized that their future relied on adopting his tactics, a gambit that helped them win seven of the ten pre-Obama elections (including 1968 itself, in which Nixon used a lighter version of Wallace’s own rhetoric). The left, meanwhile, was largely disempowered as a result of this election, with the New Left’s neo-isolationism and countercultural ideas turning off large chunks of the New Deal coalition that had been responsible for Democrats winning seven of the previous nine post-FDR contests.

Shortly after the election, two popular books were released that attempted to cover it — An American Melodrama: The Presidential Campaign of 1968 by Lewis Chester, Godfrey Hodgson, and Bruce Page and The Making of the President — 1968 by Theodore H. White. While both books vividly recall the personalities and events of that year, An American Melodrama is distinguished by its remarkable insight into deeper ideological dynamics. Whole chapters are devoted to dispassionately deconstructing Wallace’s third-party candidacy and the various facets of the New Left (to say nothing of the incipient attempt of Ronald Reagan to revive the Goldwater movement against Nixon, the growing role of advertisers and PR men in handling candidates’ images, the media’s own role in manipulating public emotions, and much more).

The Making of the President — 1968, on the other hand, is almost shockingly dismissive of anything outside the bounds of conventional politics. Wallace only appears six times, on each occasion briefly, before page 400 (in a 508 page book), and even after that is given only cursory attention, with White entirely failing to see the sophistication of his coded rhetoric and even cozying up to the GOP by claiming that “Nixon conspicuously, conscientiously, calculatedly denied himself all racist votes, yielding them to Wallace.” The New Left, meanwhile, was ignored entirely, with its members being lumped in with other groups — the Kennedy and McCarthy campaigns, the pre-existing civil rights and antiwar protest groups, the “crazies” (i.e., counterculturalists) who “sprout everywhere” and were dismissed as “a giant put-on, a visual pun, a strolling farce of lost and forlorn people” who bring tears to the eyes at “their diseases (mainly venereal), their health (decayed from malnutrition and drugs), and the disturbances, rarely dangerous, of their minds” — instead of recognized for their distinctive characteristics. Because White didn’t identify with either extreme, he refused to even attempt to project its potential future in American politics. Needless to say, his book suffered greatly as a result.

This brings us back to Double Down. Despite devoting entire sections to figures who, though media darlings, played either minor roles in the election (Chris Christie) or virtually none at all (Donald Trump), the book only mentions Ron Paul 12 times, 11 of them in passing. Indeed, whereas White at least had the presence of mind to recognize that movements existed in the New Left and behind Wallace, Heilemann and Helperin barely do that, with their most detailed reference to the Paul campaign occurring on page 237:

“As for Ron Paul, his radical libertarianism, out-front isolationism, and just plain kookiness — from his abhorrence of paper money to his ties to the John Birch Society — made him more likely to end up on a park bench feeding stale bread to the squirrels than become the Republican nominee.”

Compared to this contemptuous dismissiveness, White was downright kind to the hippies.

The point here is not that Heilemann and Helperin should have been kinder to Paul, or for that matter, that they should have been critical of him. What matters here is that Paul was important. He wasn’t a disposable assembly line Republican, be they neocons like Mitt Romney and Jon Huntsman, Tea Partyers like Herman Cain and Michele Bachmann, or Christian right-wingers like Rick Santorum and Newt Gingrich (who Heilemann and Helperin inexplicably insist on calling “Santo,” which NEVER gets old). His ideology was something that, if not altogether new (see Calvin Coolidge, Robert Taft), at the very least has not had a spokesman nearly as prominent as Paul in quite a long time. He received more than 2,000,000 votes (or more than 10%) in the primaries, took cyberspace by storm, inspired legions of outspoken followers in every corner of America, and has a son, Rand Paul, whose watered down version of his father’s libertarianism has made him one of the top contenders for the 2016 Republican presidential nomination. Even the actual libertarian candidate that year, Gary Johnson, almost certainly performed better than most third-partyers (although at 1% of the popular vote not enough to dub this election “Obama-Romney-Johnson” as opposed to “Obama-Romney”) because even after Paul bowed out, his movement remained.

In short, Paul and his libertarian acolytes may not have been the whole story in the 2012 election, but that they were major players in that contest and will almost certainly play a big role in upcoming ones. As journalists, Heilemann and Helperin had a professional responsibility to cover that story. By missing it, they did a terrible disservice not only to the libertarian movement, but to themselves. When future historians look to study the Obama-Romney contest, Double Down will be viewed as a great source for gossip, but not much else.