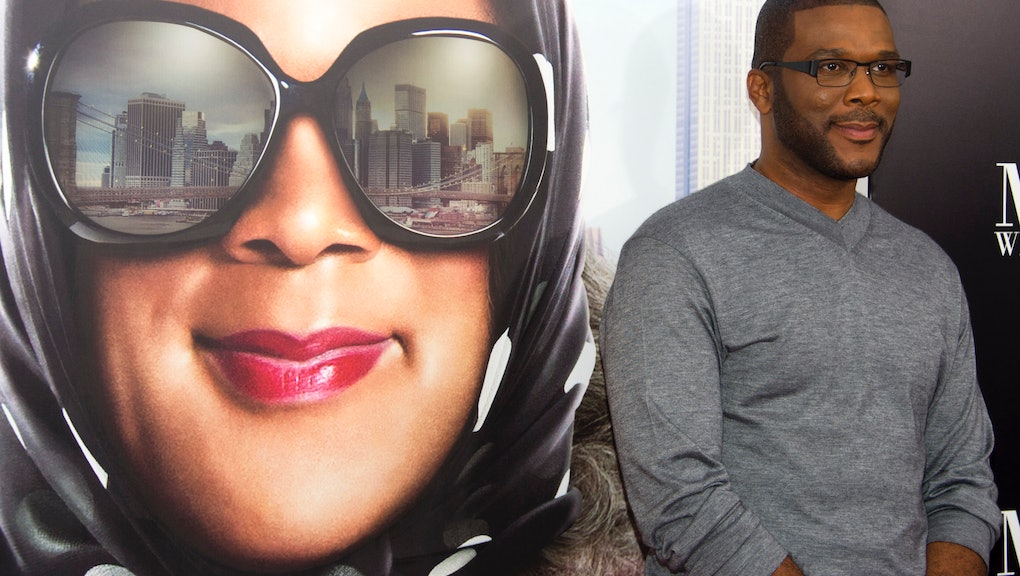 Kenan Thompson, Eddie Murphy, Tyler Perry and Martin Lawrence have all worn prosthetics and fat suits to caricature black American women of size. Jamie Foxx and Kevin Hart have also contributed to a pandemic of comedians using humor to commit a historical sin. They've taken the reigns from blackface performers of the minstrel tradition to reinforce the controlling image of the mammy.

Cultural backlash has been swift against Halloween appropriators, but criticism comes slower to black men when they perform "black woman face." Black woman face (or neominstrelsy) is defined by Dr. Robin R. Means Coleman, an associate professor at the University of Michigan, as "black male performers distorting both black women and the rituals of drag" as a form of cultural entertainment.

This new tradition allows black men to appropriate black women for their gain, while also reinforcing the black American woman as an obese, asexual (or, in Eddie Murphy’s character Rasputia’s case, hypersexual) deviant who is content with nurturing and serving others.

Dr. Patricia Hill Collins, a sociologist who studies women of color, contends that controlling images or "portraying African-American women as stereotypical mammies, matriarch, welfare recipients, and hot mommas" justifies the oppression of black women across the intersections of gender, race, and class. According to Hill Collins, controlling images were created to present social issues like poverty and racism as "natural, normal, and inevitable parts of everyday life" and also to maintain intersecting oppressions.

Lawrence, Perry, Murphy, and Thompson’s behavior seems harmless. After all, Eddie Murphy’s Rasputia character doubles me over in laughter, and Tyler Perry’s Madea has sold out movie theaters throughout the United States. But it is the infusion of comedy that makes this behavior so dangerous.

Perry has faced backlash for his portrayal of black American women in films, and he often sidesteps the criticism by claiming these characters are based on real women he’s encountered. Maybe. But I am a millennial woman of size and I am not reflected in the images peddled by black men in the media.

The truth is, appropriating black womanhood is profitable. The Nutty Professor and Big Momma's House films have been successful for Murphy and Lawrence, respectively, and Tyler Perry has built an empire on Madea films and even a book.

Foxx and Lawrence premiered a brief clip at the 2009 BET Awards of them reprising their roles as Shenenah from Martin and Wanda from In Living Color, and the popularity of the clip persuaded Screen Gems Studio to fund a feature-length film. Coleman claims no one benefits from black men appropriating "a silence around one of the most symbolically devastating treatments of black womanhood," but the studios and the actors are clearly furthering their careers.

I was one of the critics who called Dave Chapelle a lunatic when he abandoned a $50 million contract and disappeared from the limelight. The brilliant comedian was at the peak of his career when he left Hollywood, and I couldn’t understand how a man with that much talent wouldn’t leverage his brilliance into a more lucrative net worth. But my opinion shifted when he asked a poignant question on the Oprah show: "Why do all brothers have to wear dresses in this business?"

He challenged neominstrelsy in order to place integrity above laughs. He's no lunatic. He's the smartest man in show business.