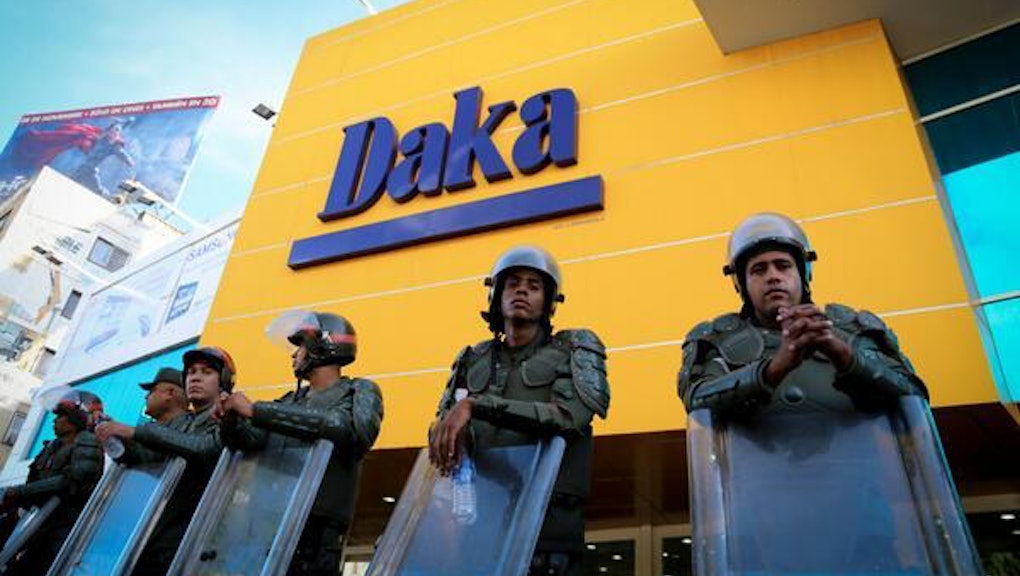 While millions of Americans surf the web in search of the best upcoming Black Friday deals, Venezuelan President Nicolás Maduro has his own plan to offer his citizens remarkable deals: force companies to drop their prices.

On Monday, Maduro sent in the Venezuelan National Guard to force electronics chain Daka to start charging consumers "fair" prices. Criticizing the rising prices of electronics sold by the chain, Maduro declared a shopping free-for-all on national television, stating, "Leave nothing on the shelves, nothing in the warehouses … Let nothing remain in stock!"

The move comes amidst hard economic times in Venezuela, where shortages of basic supplies have led to monthly inflation rates as high as 49% percent. The takeover of Daka is part of a larger "economic offensive" by Maduro to tackle prices jacked up by inflation.

"For the period of November and December we will establish a special operation to protect and ensure fair price sales for the population of several items that we consider important," Maduro said in a recent televised speech. Daka is one of such chains accused of commodity hoarding and market manipulation.

The timing behind this "special operation" coincides perfectly with the referendum on Maduro's presidency, set to occur on Dec. 8. Maduro has been extremely unpopular with the food shortages of late, and a government-sanctioned looting is a good method to keep the masses distracted.

While Maduro maintains that inflation is the result of a conspiracy led by Washington and Venezuelan leftists, economists have blamed the president's uncontrolled public spending, which has caused a money supply increase of around 70% in the last year. Compounding this is Venezuela's antiquated monetary exchange system, which only allows access to dollars through government-approved channels. For a country that relies heavily on imports, this has created a black market boom for hard currency, and consequently, heavy inflation.

The takeover is concerning, especially from a country with a reputation as tarnished as Venezuela's. Such direct government control on private industry has not occurred since the the Cold War, and if it's successful in keeping Maduro in power, we could see the extension of another Chavez-like era of dictatorial rule. The owner of Daka has already been arrested, and several other owners have been charged. If President Maduro is to be taken at his word, then this is just the beginning. As Maduro stated, "You've not seen anything. This is the just the little tip of the iceberg."

However, not all Venezuelans are so easily bribed. Carlos Rivero, a 42-year-old engineer in Caracas, said, "What stops them [from] going into pharmacies, supermarkets, and shopping malls?"