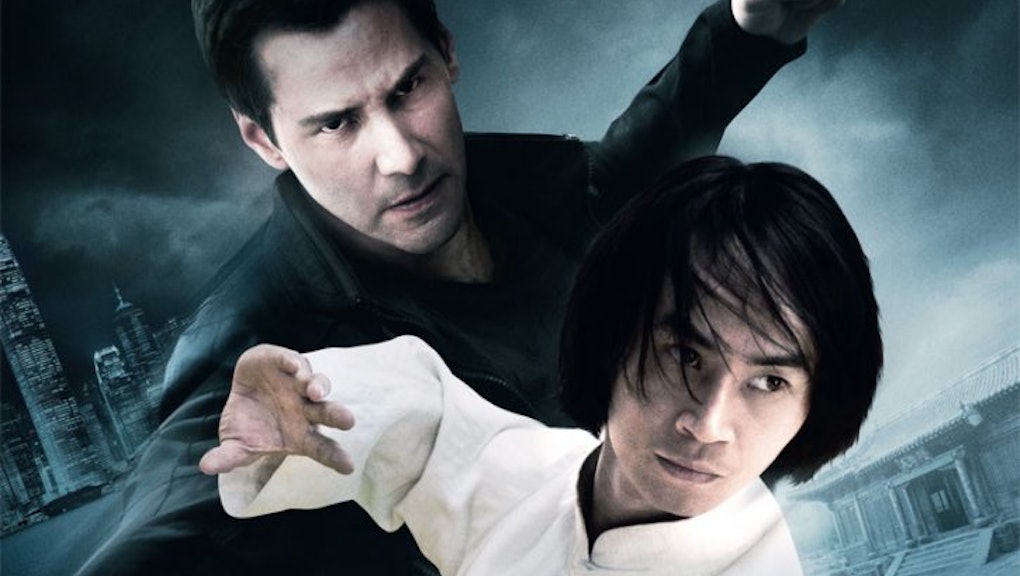 When I first heard the title Man of Tai Chi, I thought of the old Chinese ladies who kicked it in the parking lot near my house when I was young. I saw them t'ai chi-ing as I walked to school each morning, and thought how depressing it was that this could be my future — standing in the cold, surrounded by other old people, wearing slippers, and slowly waving my arms in the air.

Today, I realize this is probably the least depressing thing an old person can do. As we approach the "greatest retirement crisis in American history," future grandmas and grandpas may need self-defense skills more than ever before. Though t'ai chi is more commonly used as a low-impact workout than training for hand-to-hand combat, its techniques could become vital in a Road Warrior-esque future where 75% of near-retirees have less than $30,000 saved, and so must physically compete for resources. You heard it here first: Death Match 401K will be TV's most watched show by 2050.

I may be joking, but Keanu Reeves' film imagines the social elements that might foreshadow such violence. Man of Tai Chi stars Tiger Chen as Tiger Chen, an ageless delivery man-boy who uses his t'ai chi skills to compete in a televised fighting tournament. Reeves' character, the villainous Donaka Mark, soon discovers Tiger and offers him a lucrative "job" fighting in an underground competition. Tiger declines at first, but when safety officials threaten to foreclose on his master's temple, he decides to fight and use the money for repairs. Then, the unexpected happens: the brutality encouraged in Donaka's tournament becomes so thrilling and addictive that Tiger cannot stop, even once he's earned more than enough cash.

The allegorical parts of this story might seem incidental, but as a rule I can never underestimate the man who gave us Johnny Utah. Here's what he's telling us: according to the Bureau of Labor Statistics, the U.S. unemployment rate was a daunting 7.8% in October 2013. This likely means that many people lucky enough to work are collecting checks at jobs they hate, just so they can afford to drink away their sorrows. Like your friend who graduated with a B.F.A. in Experimental Theatre and now serves yogurt at Red Mango, Tiger Chen seems frazzled and unfocused at his delivery gig. He's constantly showing up late and getting yelled at by unhappy customers.

But a paycheck is a paycheck, no matter how you get it. Luckily for Tiger, he also has a marketable skill that people like Donaka Mark will pay good money to exploit. Many of us lack this luxury — though we're probably all just as "special" as our mommies said we were, it's hard to attach monetary value to the ability to fart on cue, or whatever it is you're good at.

Perhaps most interesting is that Tiger sacrifices a normally peaceful craft for violence in the name of profit. Violence in reaction to social and economic uncertainty is not new, as scholars have pointed out, but the financial motivation behind Tiger's brutality becomes complicated when we recognize the pleasure he gets from it. One might ask why he keeps fighting once the money no longer matters. In his pre-Donaka tournament, Tiger fights out of pride, to prove that t'ai chi is as legitimate a fighting form as kung fu, Muay Thai, or what have you. Then he fights for Donaka because he has to — not just for money, but because all his opponents seem hell-bent on inflicting as much damage on him as possible. But once his survival instinct devolves into pleasure, his motivation becomes simpler: beating the shit out of people feels really, really good because it lets Tiger assert a form of power that's entirely absent from his underemployed "real life."

A final thought: this phenomenon has a real-world parallel. Studies suggest that unemployment and underemployment directly correlate with increases in violence, especially among men. That Tiger's journey reflects this is an ugly fact, but this is a movie, so in the end it works out fine for him. Will it work out as smoothly for us?

I doubt it. But in the meantime, you can find me with the old Chinese ladies, training for the apocalypse in the parking lot.