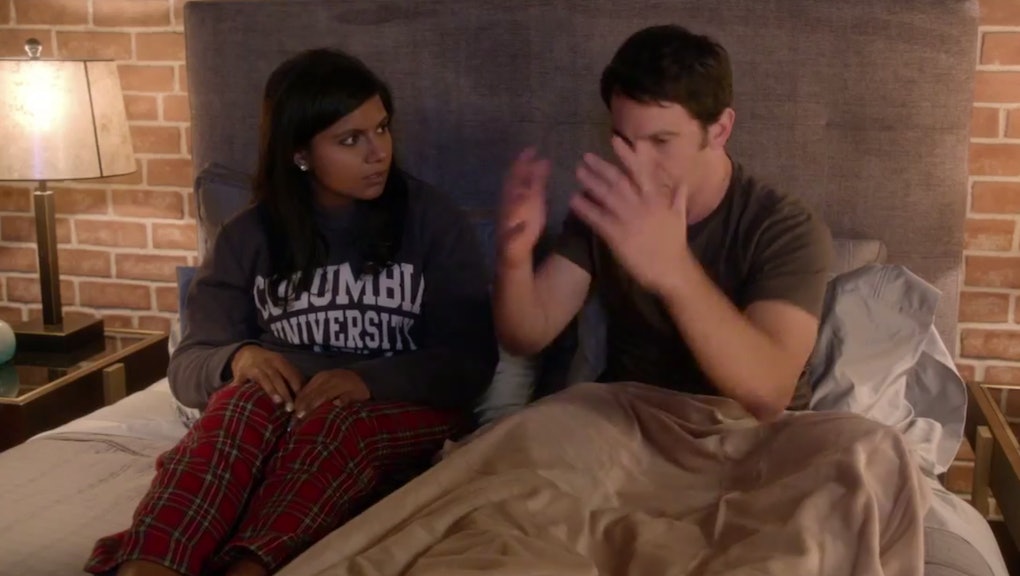 Like the quintessential romantic comedy You've Got Mail, the latest episode of The Mindy Project, "You've Got Sext," is a tale of mistaken identities and romantic foibles, except without the fairytale ending.

This episode, Mindy sets off a complicated chain of events when she leaves her purse at the office on a Friday evening. Her well-intentioned coworkers, Morgan and Peter, decide to use her phone to sext her former flirtation, hot lawyer Cliff. Meanwhile, Mindy has to pretend to date Danny to help him avoid his ex-fling, Amy. Unfortunately, just as Danny begins to come to terms with his feelings for Mindy, Mindy decides to act on her feelings for Cliff, who has taken comfort in the arms of Mindy's neighbor, Heather, leaving Morgan heartbroken. Confused yet? There are a lot of players here, so let's break it down.

The episode starts with Morgan chastising Mindy for failing to prioritize her romantic life. Morgan then witnesses Mindy embarrassing herself with Cliff and his extremely attractive date.

Determined to help Mindy out, Morgan seizes the opportunity when he discovers that Mindy has accidentally left her purse at the office. Egged-on by Peter, he takes it upon himself to play Cyrano de Bergerac for Mindy and send flirtatious texts to Cliff, who responds in kind.

Unbeknownst to Cliff, Mindy is actually locked out of her apartment and forced to stay at  a reluctant Danny's apartment for a night. As they arrive at Danny's building, the pair are approached by Danny's former fling, a neighbor by the name of Amy. At Danny's request, Mindy pretends to be in a relationship with him in order to help him ditch Amy.

However, Mindy takes it a step too far, perhaps, by inventing an elaborate romantic backstory for Amy's benefit, complete with a cute how-we-met story, an engagement, and a pregnancy.

Back at the office, Morgan and Peter are thrilled with their success in setting Mindy up with Cliff over text. Unfortunately, they manage to get Cliff so excited that he decides to head over to Mindy's apartment to see her in person.

Using the keys they found in Mindy's purse, Morgan and Peter quickly throw together a small party at Mindy's apartment in an attempt to distract Cliff. Morgan and Peter's end game here is unclear, since at some point Cliff would have to realize that Mindy was not there. In the process of putting together the party, Morgan has invited Mindy's chatty neighbor, Heather, on whom he clearly has a crush. At one point, Morgan and Peter are so desperate to keep Cliff from leaving the party that they force Cliff to listen to the aggressively talkative Heather.

As expected, Cliff eventually learns the truth behind the sexts and instructs Morgan and Peter to delete the texts from Mindy's phone. Cliff crushes Morgan's hopes when he then goes home with a solicitous Heather.

On the other side of town, Amy shows up in Danny's apartment determined to tell Mindy the truth about her "fiancé." Mindy learns that Amy and Danny actually slept together for some time and that Danny even gave her a key. Mindy pretends to be hurt by these revelations while using the excuse to slap Danny a few times.

Throughout all of this, Danny is clearly struggling with the nature of his relationship with Mindy. Early on in the episode, Mindy mentions to Danny that she has a crush on an unnamed person in their office building. A horrified Danny assumes that he is the object of Mindy's affection, forgetting that Cliff has an office on their floor. Danny starts mistaking friendly gestures by Mindy as flirtatious overtures and rebuffs her.

By the end of the episode, Danny has changed his tune and encourages Mindy to go after the object of her affection.

He is clearly surprised and disappointed when Mindy announces that she plans to call Cliff at the next opportunity. Of course, Mindy's plans are thwarted when she learns that Heather has taken up with Cliff. She also sees the sexts on her phone, setting us up for an interesting episode next week.

This episode absolutely realized my hope for more character development. In "You've Got Sext," Mindy is more confident in herself and unwilling to change herself for a man. Mindy's relationship with Danny has also evolved since the beginning of the series. While the two have always had sexual tension, they've started to develop genuine affection for each other. I can tell from Tumblr and Twitter that fans of the pairing were very encouraged by this episode, with good reason.

I also appreciated that all of the characters and subplots fit seamlessly together this time around. While it was more challenging to recap, it made the transitions between the two main plot lines less jarring than in episodes past. Morgan and Peter also make a very funny duo and I look forward to more of their banter in the future.

Best Mindy Moment: Mindy embracing feminism and telling Morgan not to judge her by her sexual attractiveness.

Guest Star Power: Ellie Kemper of The Office fame showed up this week! This show is basically an Office reunion.

The Ex Factor: Hot lawyer Cliff is the latest of Mindy's exes/romantic interests to come back through the revolving door on this show. To be honest, I had to read through my own recaps to remember what he previously contributed. Amy takes the cake for the most awkward ex on the episode, though, by showing up in Danny's apartment to confront the woman she believes to be his fiancé.

PSA: This episode should serve as an important reminder to put a passcode on your phone. It may not keep out the NSA, but it might prevent your friends from sexting your love interests on your behalf.