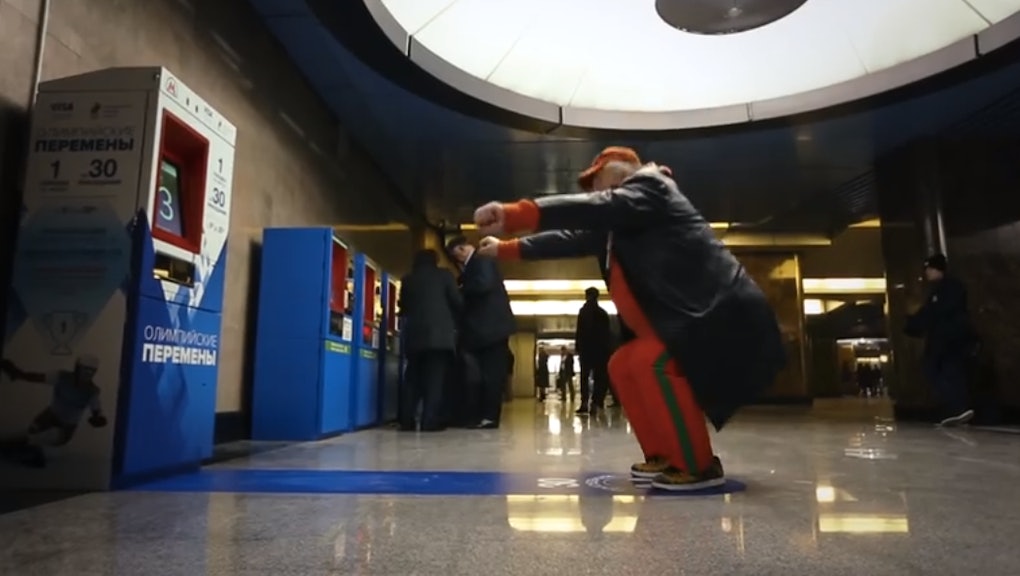 Russia, home to some of the world's worst public drunkenness, most terrifying homemade drugs, and most insane traffic accidents, is getting a jump start on its New Year's resolutions by instituting an exercise-based fare for the Moscow metro, the second-busiest subway system in the world.

For the next month, riders will be able to pay for their trip by doing 30 squats — one for each rouble they'd normally spend — in front of a motion-detecting ticket machine. The unorthodox fare system is intended promote 2014's Sochi Olympics, which are so much more than a way to alienate and endanger the world's LGBT communities. According to Russian Olympic Committee President Alexander Zhukov, the initiative will "show that the Olympic Games is not just an international competition that people watch on TV, but that it is also about getting everyone involved in a sporting lifestyle."

Asked about its new exercise regimen, Russia acknowledged that it has really let itself go lately, but insisted that things are going to be different this time, that it can change, and that today is the first day of the rest of its life. The world's largest country, which is no stranger to high-tech fitness, highlighted its dedication to getting in shape, citing its purchase of 143.5 million pairs of Mizuno Wave Runner sneakers and an equal number of Nike+ Fuelbands.

If the Moscow metro's new ticketing system pays off, other countries may consider instituting similar fares. France may burn off baguette carbs by doing lunges in the Paris metro, Japan could compensate for not leaving the house by doing crunches in Tokyo's subway, Great Britain could atone for its full English breakfasts by doing pull-ups in the London underground, and the United States could bring some of New York City's old charm back by instituting hurdles or a shiv-or-be-shived fare.