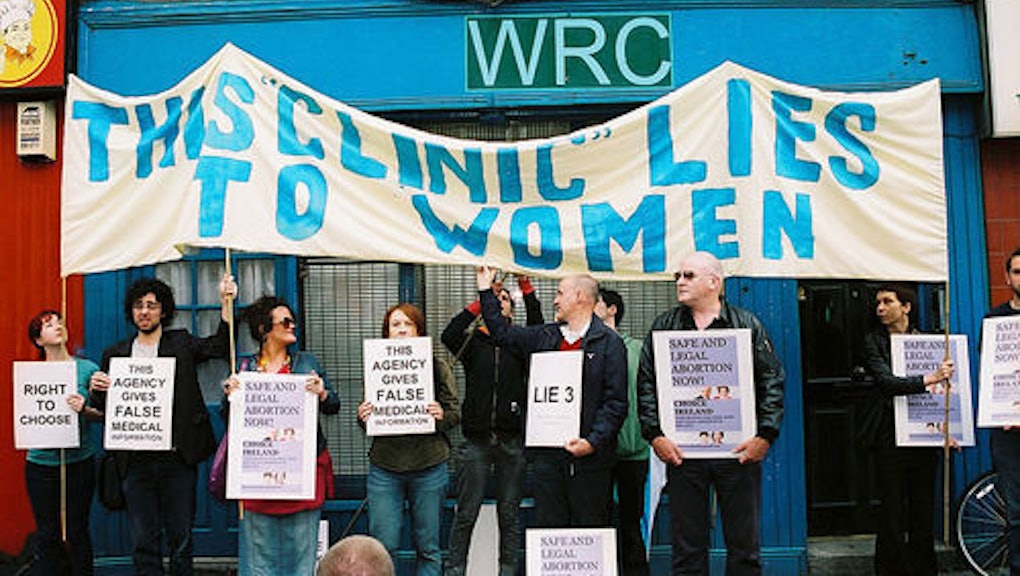 Billboards with lines such as these plaster cities across the country. They advertise so-called “crisis pregnancy centers” (CPCs), and strategically target pregnant women in need — particularly youth, low-income communities, and women of color. These centers, however, are not legitimate medical clinics, and they rarely offer “options.” Instead, they are generally associated with anti-choice and religious organizations and have a mission to prevent women from accessing abortion services and contraception. They are often located next to legitimate abortion and medical clinics and are frequently listed in the phone book under headings such as “abortion services,” “family-planning information centers,” or “women’s organizations.” Their names often include the word “choice” or “accurate information.”

What is shocking is that these centers exist in every state in the U.S., and many receive state and federal funding. Many states now even legally require women to visit these centers before procuring abortion services. Anti-choice politicians often take public dollars from licensed clinics and family planning resources and funnel them instead to these religious, politically motivated, and deliberately misleading organizations. There have been well documented cases of crisis pregnancy centers giving false or inaccurate information to women, or pressuring or shaming them. Numerous CPCs’ websites from across the country include the following language: “Abortion is not just a simple procedure… abortion has been associated with… emotional and psychological impact and spiritual consequences,” and then they go on to list the “symptoms” of abortion as guilt, depression, suicidal thoughts, difficulty bonding with partner or children, and eating disorders. None of these claims have any basis in legitimate scientific research.

There have been reports of crisis pregnancy center staff trying to convert patients to Christianity. Many insist on a disproven connection between abortion and breast cancer. Even Yelp users weigh in on the madness. Searches for abortion providers or women’s clinics in various cities expose some of these centers’ tactics. Some highlights:

“There is no ‘choice’ at the Louisville ‘Women's Choice’ clinics. Just abuse, shame, and bigots who would rather undress a woman to make her feel vulnerable and then explain how awful of a person she is than let her make HER. CHOICE.”

“Women have come out of this building crying, and on a few rare occasions, without their pants. They take you to a back room for an ultrasound, have you remove your pants, and then begin lecturing you on the sins of aborting. They do not give you back your pants until you have listened…”

“I was warned that I would inevitably suffer from post-abortion stress syndrome, even though the American Psychological Association says there is no evidence of increased mental health problems among women who have an abortion in the first trimester. I was told that I would not hear this information from doctors, because doctors make money performing abortions and would lie about the procedure’s risks.”

“This is one of those anti-choice ‘free’ clinics that will rope pregnant women in hoping to steer them away from an abortion. No matter how free, caring, blah blah blah they claim to be, this is a clinic with a mission.”

Fortunately, a response is building. Legislators at both the state and local level across the country are challenging these centers, and members of the Young Elected Officials Network have noted the growth of these centers in their communities, often strategically placed next to legitimate medical clinics. Santa Clara County Board of Education Trustee Darcie Green noted that CPCs even appear to be targeting schools and low-income youth in her district. City Supervisor Jane Kim sponsored an effort to make San Francisco the first city in the country to ensure that CPCs accurately advertise their services. In Wisconsin, County Supervisor Jenni Dye sponsored an ordinance guaranteeing that the county contracts with reproductive health centers that provide factual information to women. Even legislators in Congress are beginning to stand up to the attacks on women that have multiplied over the last three years.

Women are often called the bellwether of progress in society. Women’s status and rights indicate the state of the larger social and political landscape. It is time for women to take back our rights and power, and for a clear shift in the direction of our country.

This week NARAL and the Feminist Majority Foundation are also launching the CPC National Week of Action — follow it on Twitter by using the hashtag #CallOutCPCs.