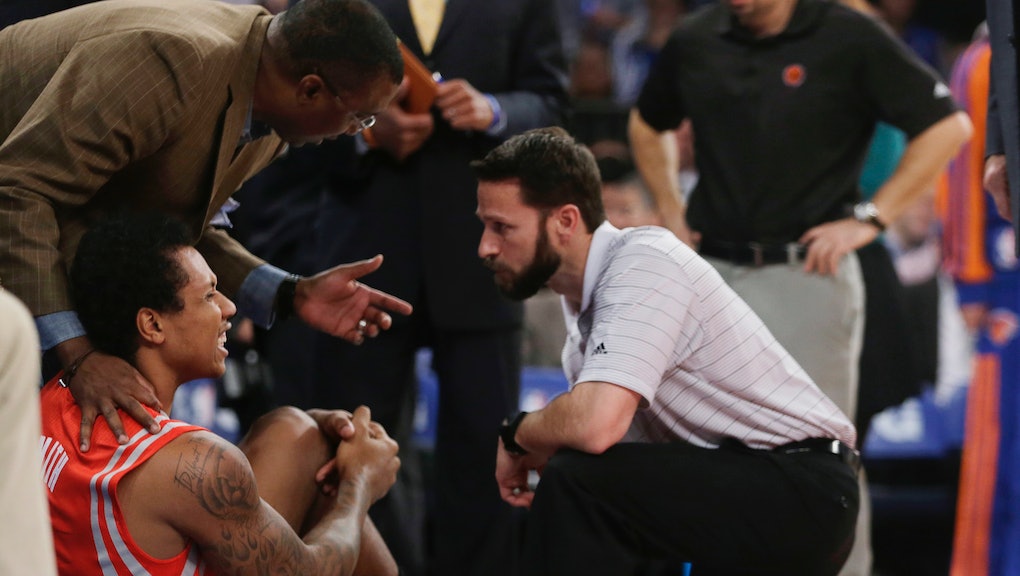 High Fives May Help Your NBA Team Win the Championship

In a touch-phobic society, super-manly NBA players may finally prove that physical contact between all men is acceptable, healthy, and masculine. A recent study found that NBA teams whose players had the most physical contact during games early in the season were the most successful down the stretch. Turns out that all those high fives and draft hugs actually make a huge difference.

Sounds strange at first, but it actually makes a lot of sense.

When I was a freshman in high school, I took a baseball straight in the mouth during baseball practice, dislodging my bottom row of teeth and spraying blood down the front of my shirt. I was utterly shocked and terrified, but my coach reacted in the best possible way. He remained calm, put an arm around my shoulder, and walked me to the nurse. As he walked me over, I began to feel better, though I didn't realize the significance of his arm around my shoulder at the time.

Touch's benefits aren't just for athletes. Whether it's a comforting arm on your shoulder or a slap on the back, touch activates the brain’s orbifrontal cortex, soothing us and making us feel safe It additionally releases oxytocin, lowering stress hormones and further enhancing feelings of trust and attachment. (Dedicated readers of this column will remember that oxytocin as the same hormone released when we share our emotions). This consistent release of oxytocin, through frequent touch, lowers stress, blood pressure, and can even reduce the risk of heart disease in the long-term.

Touch is also by far the most accurate of our five senses at receiving emotional signals. In a 2009 study at DePauw University, psychologist Matthew Hertenstein found that touch could communicate eight different emotions, with an accuracy as high as 78%. (For reference, chance level is 25%).

But we have to know what touch means and feel OK with it before we can reap its benefits. A 2012 study showed a sample of heterosexual men different videos of people who were purportedly touching them, followed by a real touch on the leg. The men, wired for analysis of their subconscious reactions, were consistently more uncomfortable when they thought a man was touching them.

The kicker? They were actually being touched by a woman, no matter what the video showed. This suggests that, despite touch’s accuracy, societal expectations and pressures can override the biological benefits of touch.

Put this all together, and we can say that touch makes us feel better by releasing soothing hormones and communicating a sense of trust and compassion, though this may be less likely if the touch comes from a guy we don’t know, thanks, not to our biology, but to our sociology. The power of touch is why my coach’s hand on my shoulder kept me calm despite the steady drip of blood from my nose.

This also seems to be why NBA teams whose players have a lot of physical contact outperform those with less. Touch strengthens their relationships, helps them communicate quickly and accurately, and builds trust among players ... and sometimes, even fans.

These same high-fiving, back-slapping players are considered icons of manliness for many American men, showing us that touch is a healthy and productive outlet of masculinity, one that we need not fear.