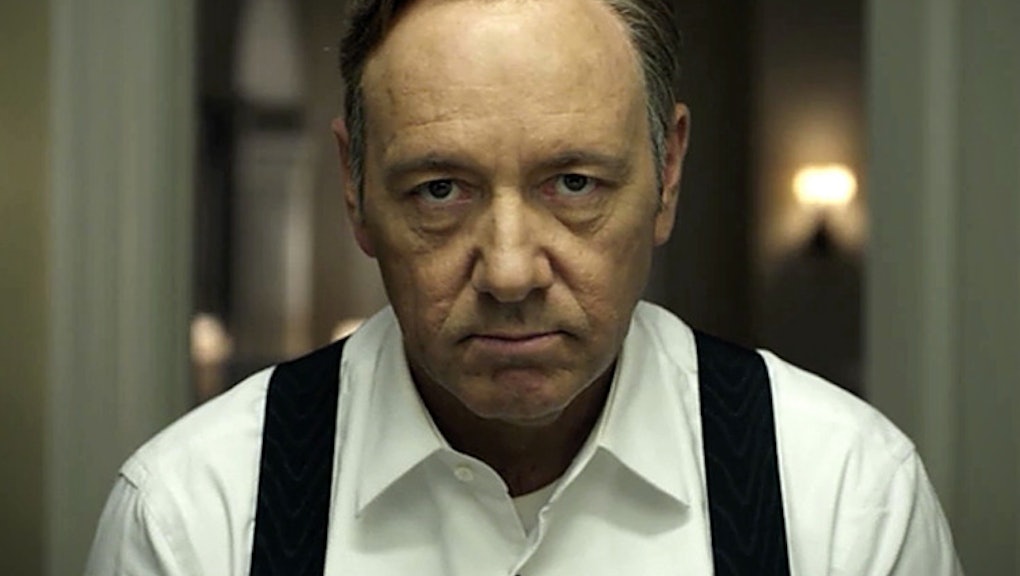 What do these shows tell us about American politics today? In House of Cards, Democratic House Majority Whip Francis Underwood, played by Kevin Spacey, is a conniving, Machiavellian politician who navigates the halls of a corrupt and unprincipled Congress in his quest for power and revenge.

In Veep, Julia Louis-Dreyfus is hilarious as the self-absorbed Vice President Selina Meyer, bumbling her way through a farcical, dysfunctional government. Alpha House features a celebrity-turned-politician with a contempt for campaigning, a charismatic young playboy with presidential ambitions, and an anti-gay crusader whom everyone believes is closeted but himself. These are not the characters and plots of political idealism. These are a reflection of the cynical and often contemptible feeling that Americans now harbor towards the politicos of Washington, D.C.

For many Americans, Spacey's Francis Underwood seems to be far too real a character as an ambitious congressman without moral scruples or principles to stand on; a representative of the people fully transformed into a creature of the capital. And if a politician is not conniving or corrupt, then they must of course be some sort of bumbling fool like Selina Meyer. The turmoil of Alpha House is clearly built on the infighting in the Republican Party today as the GOP establishment struggles against a Tea Party insurgency and grapples with how to appeal to fleeting demographics within the electorate.

These characters are all caricatures of how the American people see our leaders today. It is no coincidence that our television shows depict politicians as either fools or snakes at a time when there is such anti-establishment backlash against a government mired with abysmal approval ratings. Currently, President Obama and the Democratic Party are playing the part of the fool with the completely botched rollout of a ridiculously overpriced website. The Republican Party is the epitome of dysfunction as it makes a government shutdown look like one man's temper tantrum and primaries itself out of what should be easy congressional seats to win. From Obama's dishonesty on whether Americans will be able to keep their health insurance plans, to carpetbagger Liz Cheney's new and opportune hardline on gay marriage, it's not that hard for us to believe that all politicians are unprincipled and opportunistic.

This is all a far cry from the hope and idealism expressed in Aaron Sorkin's The West Wing, which showcased honorable people on both sides of the aisle fighting honest battles for the good of the country. President Jed Bartlet was introduced to us in the prosperity and security of the post-Cold War, pre-9/11, Internet-economy-fueled era of the 1990s. In the 2000s, The West Wing provided an outlet for people fed up with the struggles between the Bush administration and Congress. While things were rough in the post-9/11 world, Americans still had some hope, and for a majority of the country, that hope culminated in a Jed Bartlet-sounding Senator Barack Obama in 2008.

Alas, in the wake of the Great Recession, after a decade of war, and as people have come to see Barack Obama not as an idealistic uniter but simply another charismatic creature of Washington, cynicism has gained a grip on the nation. (Sorkin is trying to change this with The Newsroom, but even that has a more cynical flavor than The West Wing). We are still desperate for hope and idealism, though, as they are quintessential virtues of the American soul.

This month, we remember the 150th Anniversary of the Gettysburg Address, and reflect on the hope and idealism of Abraham Lincoln. This week, we mourn the 50th Anniversary of John F. Kennedy's assassination, while most people probably do not remember the substance of his short presidency, but rather hold on to the inspirational beauty of his oratory.

From talk of being a city upon a hill, to Americans often being defined by our generous and can-do attitude, idealism is far more ingrained in our national DNA than the cynicism of today. All it takes is a Lincoln, an FDR, a JFK, or a Reagan to remind us of it. But for now, let's laugh at our politicians with Veep and Alpha House, and revel in the Shakespearean drama of House of Cards, but let us also take solace in the fact that, although our political imagination today is dominated by Francis Underwood, Selina Meyer, and Gil John Briggs, a century from now, we will have forgotten who they are and reflect yet again on Lincoln's famed address and on that tragic day in Dallas.