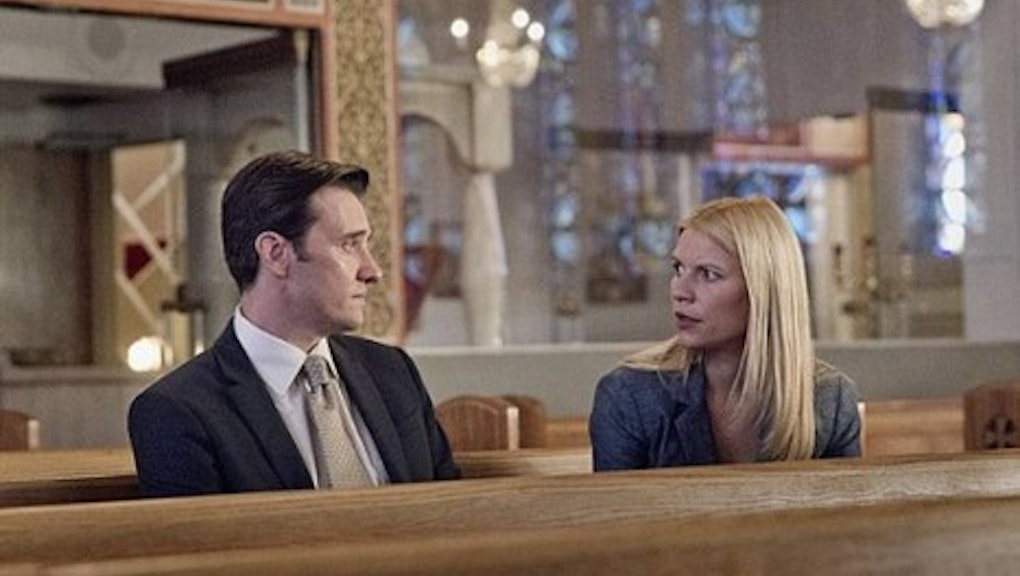 'Homeland' Season 3 Episode 8 Recap: The CIA May Finally Have Found the Langley Bomber On 'Homeland'

For the most part, it bogs things down considerably. "A Red Wheelbarrow" is no exception.

It doesn't help that this episode has three CIA operatives who decide to take time off from their jobs. Carrie asks for some time to herself, Saul discusses plans to elope to an island with Mira, and Fara takes two days off because of "migraines." That's fine and all, but does the pursuit of leisure really have to take up so much air time? We get it, they're all stressed — just don't spend a good deal of the episode showing us that.

On a more mirthful note, the episode begins with Saul and Mira getting noticeably closer. The scene ends with what is perhaps the only instance of genuine, loving sex in the entire series (if you think about it, every other sex scene has been tied to lies and deceit).

Fara, noticeably plagued by the Javadi situation, sits in her car outside of the agency for half an hour before driving away and skipping work. Okay, I understand if you're in high school and you had a shitty day or a bad breakup and just can't force yourself to go to class. But to ditch the CIA? Twice? Come on, Fara.

Luckily, the tepid Fara scene (don't worry, there's more to come) quickly evaporates from memory as Saul meets with Mike Higgins, the White House Chief of Staff, and none other than Senator Lockhart, who's there for the sole purpose of ratting Saul out to Higgins. In a moment of sheer joy, Saul denies him permission to listen in on phase two of the Javadi plan, citing Lockhart's lower security clearance as the reason.

After her loving experience, Mira meets with her boyfriend at a coffee shop to tell him the affair's over. Again, this is likely the first time sex on Homeland has been used as a promoter of beneficial decision-making.

Carrie, Saul, Quinn, and Adal all congregate to figure out their next step in dealing with lawyer-terrorist, Bennett. Adal, golf buddies with Bennett, takes on intimidating Bennett at a restaurant.

Bennett is unfazed — even cocky in response to Adal's threats of detainment. With Carrie still on Bennett's "side," it's hard not to see where he gets his confidence from. Also, he's technically clean.

Carrie meets with Bennett's underling, the Quinn look-alike (his rattier brother-from-another-mother), discovering that the Langley bomber is still in the U.S.

This woman never quits: in the next scene we find out that she's 13 weeks pregnant and actually wants to keep the baby, despite the massive intake of alcohol, a month of lithium, and all the physical and mental strain to which she's subjected the kid. Hence her request for time off.

We still don't get to know who's baby it actually is, which casts doubts to the thoughts that it may be Brody's. Who else's — Saul's? Mira did mention that his voice gets a certain way when he's talking with Carrie. I'm crossing my fingers the show won't go further into soap opera territory.

Back at the Fara household, mediocre acting is afoot. An agent visits her and informs her that missing two days of CIA work is really, like, bad and wags a finger at her while she makes half-assed excuses about migraines and being upset about Javadi's murder.

The agent leaves and her decrepit grandfather/father confronts her about her until-then secret position. Apparently, Fara has family in Tehran that would be hanged if anybody found out about her CIA connection. They argue and she proceeds to drop one of the cheesiest lines in the series: "I'm an American." It's delivered so well it gives Bandit Keith a run for his money.

Carrie visits Bennett's underling once again. Quinn-twin informs Carrie that he needs to take the bomber out of the country.

It's that time again. When shit's about to reign down. We have passed the passivity mark and are in major plot-progression territory now. Strap in.

The Langley team follow Quinn-twin (sans-Saul, who's on a trip). They set up where the underling stops — Quinn on a rooftop with a sniper and Carrie on the ground. Quinn-twin turns out to be alternate Quinn after all, because he does something very un-lawyerly: screwing a silencer onto a pistol.

You thought there was none this week, did you? Just like last episode? Nope, it's here all right:

What Crazy Thing Did Carrie Do This Week?

Afraid that allowing Quinn-twin to kill the suspected bomber would lead them nowhere, Carrie sets out on foot towards the scene, despite multiple warnings from the team to back down. Of course, she doesn't listen and Quinn has no choice (heart of gold, much?) but to shoot her in the arm and stop her interfering with the situation.

As predicted, the bomber (or whoever he is) is shot.

And then Homeland throws another curve ball at us. Saul is seen entering the confines of the Tower of David in Caracas, handing Brody's keepers $10 million in cash to claim the fugitive.

How did Saul know where Brody was, and why is he getting him now? Why did Quinn-twin kill the alleged bomber when he spoke to Bennett about taking him out of the country? What the hell was Mira's boyfriend doing transferring Saul's files to a USB?

Most importantly: why do we have to go through so much filler to get to brilliant Homeland scenes like these?

Props for ditching Jess and Dana, again. Thumbs down for stuffing the only good parts five minutes before the end, like almost always.