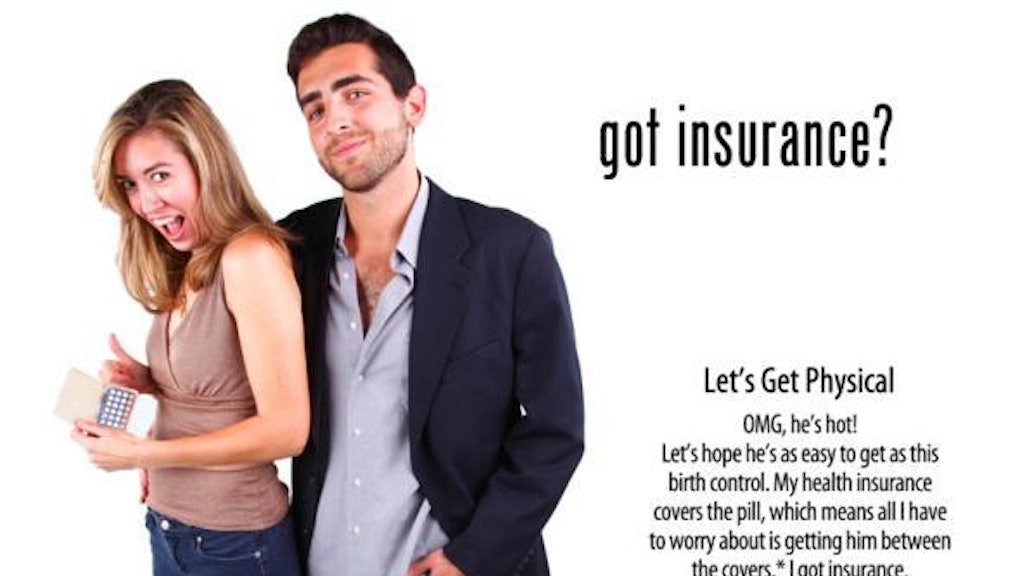 Two Colorado-based nonprofit groups, the Colorado Consumer Health Initiative and Progress Now, made waves last week with the debut of their "Got Insurance?" ad campaign encouraging young people to get health insurance. One of the ads, targeted at women, features a smiling female 20-something holding a pack of birth control pills next to a man who looks to be her age.

All the ads have a similar tone to appeal to millennials: cute and sort of silly. One even features the now-famous Ryan Gosling "Hey Girl" meme.

While not exactly clever, the ads are doing precisely what they're supposed to — getting people to talk about health care, and directing attention to the new health insurance exchanges. The campaign has been praised by progressive groups for encouraging safe sex and informing young people that health insurance must cover contraception now.

Aside from the clear positives of providing young people with important health care information and supporting safe sex, the ads deserve praise for doing something else that rarely happens in the media: normalizing female sexual desire.

One would think that with the advent of futuristic technologies like self-driving cars and phones that read your fingerprint, an idea as ancient (and simple) as a woman wanting to have sex for the sake of having sex wouldn't be so shocking. At Slate, Amanda Marcotte notes that the ad "makes the controversial observation that women might feel sexual desire like they're people," something rarely seen without some kind of finger-wagging overtone in our culture.

However, it's clear from the conservative fury over these ads that we have a long way to go before a woman who wants to have sex — maybe (gasp!) with more than one person— isn't considered some sort of deranged, villainous nympho.

Discussing the ads on his radio show, Rush Limbaugh claimed that the ads promote a "risky, promiscuous lifestyle." Never mind that this "risky" lifestyle includes the choice to be smart about your sexual health by using contraception. Never mind that using birth control is a "lifestyle" chosen by most American women.

"If you like being a prostitute, then have at it," he said. Right. Because choosing to use birth control when you don't want to get pregnant is somehow the same as having sex for money. I might ask Rush Limbaugh if he also refers to the four women he has been married to, and not had children with, as prostitutes.

In other words, contraception is for sluts.

While these ads present a realistic portrayal of female sexuality for millennials —  an independent single woman who wants to have sex because it's fun, and because she experiences the normal human condition of sexual arousal — the conservative backlash against these ads is the dictionary definition of slut-shaming.

This isn't to say that all women in their twenties want to engage in casual sex, or that women who get married young or have only one partner aren't also "normal." Of course they are. But I'm sick of seeing a casual "boys will be boys" attitude when we talk of men seeking out sex, and an uproar about the decline of American morality when we see the same sexual desire in women.

We already live in a country where young people are routinely lied to about their sexual health, girls are told their worth as human beings depends on their sexual "purity," and news stories about teen rape are considered commonplace. Now, women who seek control over their bodies and their choices in order to protect their health are reduced to sex-crazed "whores" for wanting to make smart decisions.

Even though I find the outrage over the "Got Insurance?" campaign irritating and grossly misogynistic, I'm glad it has people talking. Jessica Valenti put it best: "Being called a 'slut' as a young person is part of the reason I became an activist. So keep it up, assholes: every time you call a girl a whore, a feminist gets her wings."