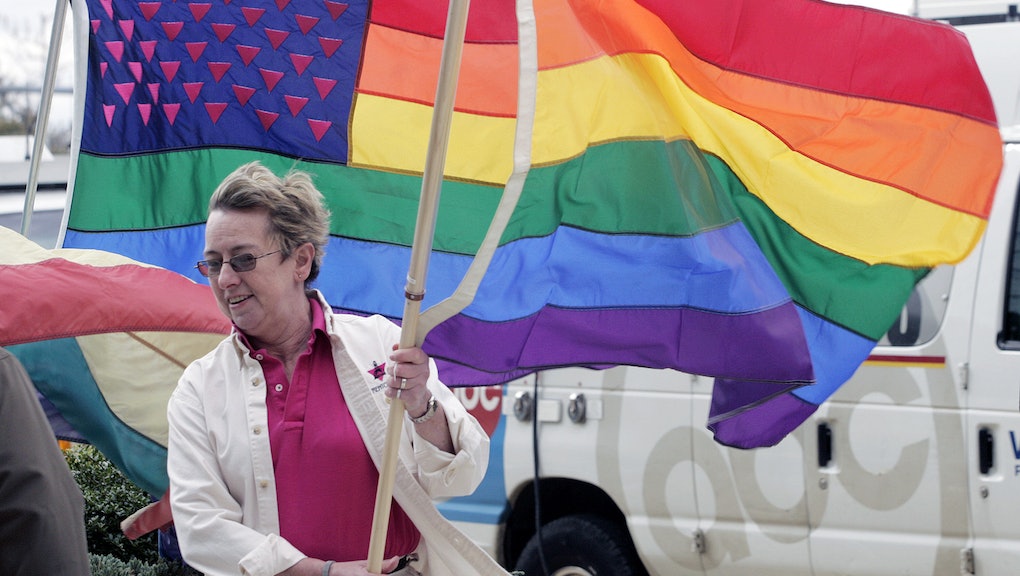 Why This Gay Person Isn't Psyched About Marriage Equality in Illinois

I remember the first time I realized that the world saw getting gay-married as different from getting married-married. I was maybe four or five, eating kid-food at my kitchen table, when I overheard my mom talking about getting married. It was all hypothetical, of course. It was in the late '90s, just after the Defense Of Marriage Act (DOMA) passed, and before domestic partnerships were a thing.

I, being tiny, didn't understand. "But you can't get married!" I told my moms loudly. In weddings, the girl had to wear a dress, but I couldn't see either of them ever doing that.

A lot has changed in the past 15 years. DOMA's dead. Many states offer domestic partnerships, and state by state, gay people are being allowed to actually — gasp! — tie the real, legitimate knot. I even got to walk my moms down the aisle once New York legalized gay marriage in 2011. But we haven't made enough progress, and that's why I'm not that thrilled about Illinois Gov. Pat Quinn signing his state's equality bill on Wednesday.

Let me be clear. I'm gay, and my moms are gay, and I can't even begin to count the number of gay, lesbian, bisexual, transgender, pansexual, and genderqueer people in my life. I want marriage to be an option for all of them. Yay marriage equality in general, and yay for Illinois.

But I'm tired of reading the same articles with the same story, different state name, celebrating state-by-state victories, adding one more to the pile. As the infomercials say, there's gotta be a better way.

Passing marriage equality doesn't come easy, and it's certainly not cheap. Back in 2011, Michael Barbaro at the New York Times wrote a fantastic piece on all the moving parts in New York's marriage equality conversation. There were secret meetings with top Republican donors, campaigns tailored to garner the votes of specific senators, and a crucial cocktail of weak leadership in the Republican party and hands-on involvement from Gov. Andrew Cuomo. Over $1 million changed hands.

Not much has changed much since then.

The Human Rights Campaign (HRC) spent over $150,000 in Hawaii in 2013 alone. Through on-the-ground campaigning on multiple islands, they sent 73,384 emails, getting over 3,000 Hawaiians to write to their senators about their support for gay marriage. They had to, because the anti-gay marriage lobby is no joke. From California, where the Mormon lobby contributed $20 million to the Prop 8 ordeal in 2008, to New York, where conservative coalitions regularly shell out thousands of dollars to keep LGBTQ people and their allies out of office, many anti-gay quacktivists haven't yet realized that marriage equality is the way of the future.

So here's what it feels like: advocacy groups wage large-scale war with limited resources in individual states. They hang out in capitols and have meetings with people, but they also organize state residents to stand outside their senators' offices. They call thousands of people, mobilize email campaigns state by state, while shadowy, prehistoric anti-gay groups mobilize similar strategies to their own nefarious ends.

But that's not the whole truth.

People are working for the legalization of gay marriage, too. Freedom to Marry, a powerful organization whose whole mission is eyes-on-the-prize, long-term national legalization of marriage equality, has created a strategic plan to "create the climate for a Supreme Court victory." Their three-pronged attack plan is this: win more states (Oregon and Colorado are probably up next), end federal discrimination (with measures such as the Employee Non-Discrimination Act, which House Speaker John Boehner (R-Ohio) won't even bring to the floor), and increase public support for gay marriage. The estimated cost of this strategy: $100 million by 2016. And that's just what this one organization, among many, expects to spend.

If you live in a pro-gay media bubble, which it is entirely possible to do, you can forget that we aren't making unilateral, awesome, gay progress towards a rainbow future. It's easy to forget that conservatives challenged California's ban on gay conversion therapy and that Boehner made sure there was a room at the Capitol reserved for the World Congress of Families, a Russian anti-gay group. We're moving backwards even as we make great leaps forward in New Jersey, Hawaii, and Illinois.

Maybe all that backwardness is why we can't just jump straight to a Supreme Court vote for national marriage equality. But how many more states have to tip individually before something can happen nationally? How far away are we from critical mass?

I asked my mom what marriage meant to her. She said she used to be more anti-assimilation, like I am today, but having me changed her mind. She needed the benefits of marriage. She needed her partner to be able to be in the hospital with us if we got sick. She needed to know what would happen to me legally if she died. Marriage is really good at taking care of those legal and medical questions. She didn't get there before I was too old for it to matter much, but I wonder: How long before couples in Texas can get married? How long before gay people in Oklahoma get the benefits they've earned?

It kind of seems like national legislation is the only way to go. It's time to stop fighting the battles and start focusing on the war.