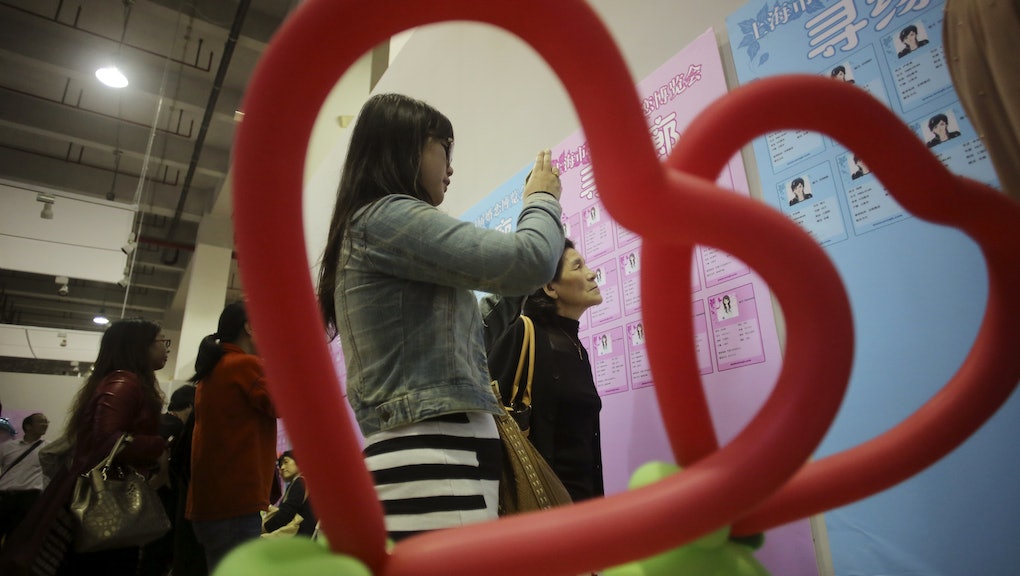 Being Single Prepares You To Die Alone, and That's a Good Thing

One of the great, less heralded qualities of the internet is its ability to make you feel really bad about yourself. The internet plays best on one of the most fundamental sources of feelings of inadequacy: our romantic relationships.

Relationship statuses and wedding pictures are maybe the whole reason Facebook even exists. As if to underscore just how anxiety-inducing relationships can be, especially in the gaining and losing sense, the HuffPo Lifestyle vertical has a sub-header for Weddings and one for Divorce, but absolutely nothing in between, or before, or after. Recently, I inadvertently clicked on a one of the Wedding headlines, "20 Things Only Married People Will Understand." The first bullet point —  "Monogamy may seem boring, but it's much more fulfilling than being single" — just about forced me to punch my computer. How could one sentence alienate so many people, all non-monogamous types and all the wretched singles?

Even in 2013, there is a huge stigma attached to adult singlehood especially for women. When you have to sit between child cousins or sleep on the pullout bed at family gatherings while younger, married siblings get their own bedroom, the implication is that you aren't actually fully adult until you find someone else to validate your existence on a constant, daily basis.

Now I don't have anything against married people or polyamorous people. This isn't a whiny diatribe against people who treat me with less respect because of my single status. Instead, I want to make the case for at least some singleness in adulthood, because in my experience, it's good for you.

Full disclosure: I have been single for three and a half years, and I am 31, so I'M IN BIG TROUBLE AND I WILL NEVER HAVE BABIES AND I'M A WITCH. But beyond that, in these last three years, I have learned a lot about the secret lessons of singleness. And lucky you, I am ready to share them:

Here's the first: Everyone dies alone. Being single helps you practice.

It may sound morbid, and you may not want to think about it, but the truth is, we all are essentially alone. When we are young, it is easier to live in the fantasy world of total attachment and connection to another person. People think that love will somehow transform them into a complete, happy person. But it doesn't. Being human means feelings of completesness are fleeting. Even when you are in love, you rarely feel completely satisfied.

Also: everyone dies. Even you. Even your partner. When you are single, you don't have to pretend this isn't the case. It's good to get comfortable being alone.

Being single teaches you that you are responsible for yourself. When I was in a relationship, I often used to think, "I AM SO UPSET BECAUSE X PERSON IS RUINING MY LIFE RIGHT NOW!"

Now that I am by myself, I still feel upset, in pretty much exactly the same ways. Now though, instead of having a person to scream at, I have no one to blame when I am unhappy, hungry, or tired. Sure, I can still blame co-workers/the internet/people driving by/random strangers but at a certain point I have to look inside myself and deal with my own issues.

Like, eat a banana already. Look, the world is suddenly not a hellscape!

This will also come in handy when you are dying because, hey, you won't be figuring it all out then, for the first time.

None of this means, though, that you should take the people you love for granted.

Recently, I sat around a table with four married couples, some recently married, some married for a long time. Over the course of dinner, they all sniped at each other about various things. I know this is part of marriage, this extreme intimacy that sometimes manifests in boredom and annoyance, but one thing being single has taught me is that I really love the people I love. My time with them is limited, so I want to treat them well and let them know I love them. By "people I love," I mean the people who are my family, which includes non-blood family you would call in an emergency.

When you don't expect someone to give you attention and love and support all the time, and then you do get it, it's pretty beautiful.

There is one constant in life and that is you. The only person who will be with you forever, inside your head, is you. You might get married, you might get divorced, you might lose the use of your legs in a skiing accident, you might get a traumatic brain injury, you might be elected president of the United States only to make a terrible website that makes the whole country angry.

Being single as an adult forces you to confront the reality that your happiness and self-worth is up to you.

This may seem counter-intuitive if you frequent the HuffPo Lifestyle vertical, but believe me — your worth cannot be determined by another person. Not your boss, not your mom and not your partner. If you wait for another person to validate you, you will surely never be satisfied in any relationship you have. Being single — really owning it instead of being single as a stopping place while you desperately search for a partner — gives you space to determine your own value.

And that's the thing: people can be fulfilled in couples, in triads, in polygamous marriages and all by themselves. Fulfillment doesn't have to do with anyone other than yourself. Spending a little time single is one of the best way to figure that out.

Before you die, anyway.