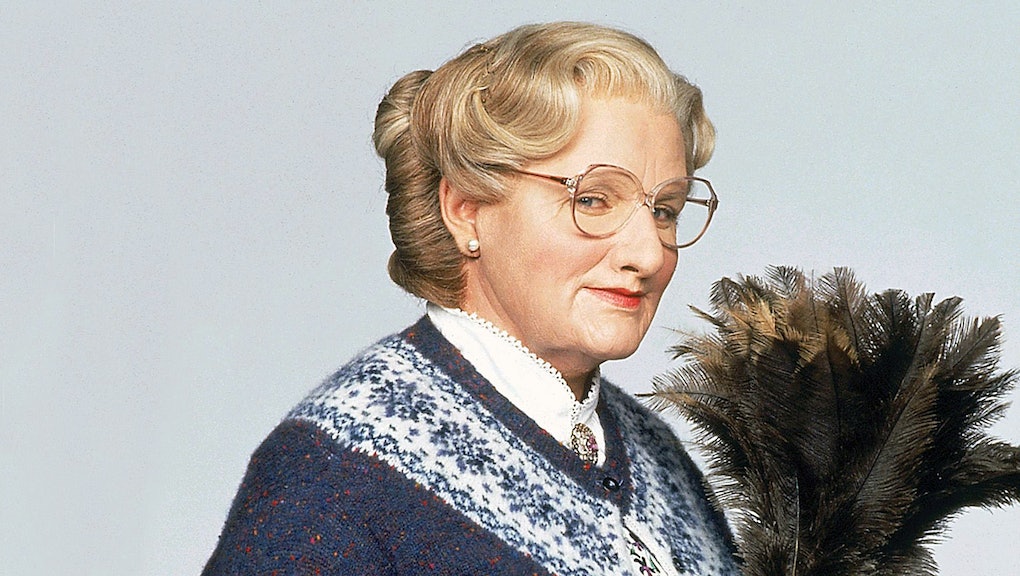 20 'Mrs. Doubtfire' Moments That Will Never Get Old

Editor's note: Robin Williams has died of apparent suicide at age 63. We're reposting this story to remember one of Williams' iconic comedic roles. R.I.P Robin: we'll never forget how you made us laugh.

The whole premise of the movie is pretty wild, but some scenes are just too ridiculous. As the film approaches its 20th anniversary on Sunday, here's another look at some of the most unbelievable/absurd/certifiably crazy moments in this classic movie that will never get old.

1. That time Daniel and Miranda have the divorce talk 20 feet from their kids.

If you have the divorce talk in the kitchen, you're shouting at each other, and your kids are sitting on the staircase within earshot, then yeah, they can probably hear everything. When you sit them down on the couch later that afternoon for a "talk," they know what's coming.

2. That time Daniel does an impression of a hot dog in front of a court official.

To me, this is actually the most insane part of the entire movie. How do you not love this guy after he does a hot dog impression? I hate her. I. Hate. Her.

3. That time Daniel loses all training as an improviser and names himself 'Doubtfire.'

That's right, he's got a backstory for the abusive member of a band called Severe Tire Damage; the foreign she-male; the crazy Southern lady who keeps someone named "Layla" in a cell; and Job the slow-talking immigrant, but Daniel somehow fails in developing his own backstory.

This is how we wind up with the name "Euphegenia Doubtfire" and a vague, 10-second history of cooking and cleaning for some English family. Daniel's an accomplished actor-improviser, yet he can't think of a more believable name? How about something more generic and therefore more difficult to background check? Mrs. Lexington? Mrs. Worthington? No. It has to be this random newspaper headline that he glances at in a moment of sweaty panic. Not Mrs. Policedoubt. Not Mrs. Wasaccidental. It had to be ... Mrs. Doubtfire.

Actually, that's kind of the entire movie. As Mrs. Doubtfire, he's raking in $300/week. The gig lasts about three months. Does he give the money back once his cover is blown? This is never addressed in the movie. Although, to be fair, I suppose it's the least of Miranda's concerns — the horror of unknowingly giving a few hundred dollars to your estranged ex-husband each week is nothing compared to the realization that he was playing dress-up, hanging around the house, having intimate conversations with you about sex and your new beau, Stu, and probably touching your intimates while doing the laundry.

Because of this scene, I had it cemented in my head that all divorced dads have a full cake in their fridge at all times — to either eat in their loneliness or stick their face in. Maybe both.

That's it. It's just insane.

7. That time two of the kids find out the secret and Mrs. Doubtfire convinces them to keep lying to their mother to keep his delusional fantasy alive.

8. That time Mrs. Doubtfire rips the hood ornament off Miranda's boyfriend Stu's Mercedes in broad daylight without any exertion.

Is Daniel also dressing up as a superhuman?

9. That time (a second later) when Mrs. Doubtfire meets Stu, tells him he has a small penis, and then hands him the "proof."

A small penis. Because he drives a Mercedes.

"They say a man who has to buy a big car like that is trying to compensate for smaller genitals."

Well you know they also say a man who has to rip off another man's hood ornament has even smaller genitals.

... When she stares at his wet bathing suit shorts and says, "The water looks cold," aka, "Your scrotum looks small," and Stu is like, "Why does this old bag hate me, if I didn't know better, I'd say she has some deep interest in keeping me away from this family, like she's actually the ex-husband or something. But that'd be crazy."

11. That time Stu tries to pressure a large 60-year-old woman named Mrs. Doubtfire into putting on a bathing suit.

He literally asks her like three times if she wants to swim, and Mrs. Doubtfire is like, "No, thanks," "They've outlawed whaling," "It'll be the Titanic all over again," "Jesus, can't you give it a rest, I'm a big lady," and finally seeks solace for her apparent body images issues at the pool's tiki bar.

12. That time Mrs. Doubtfire gets drunk at said tiki bar and hits on a hot chick who is just not having it.

13. That time Mrs. Doubtfire hits Stu in the head with a piece of fruit ...

... And blames a member of the kitchen staff for the "run-by fruiting." And then says the "terrorist" ran away. And then cackles maniacally to herself.

14. That time Mrs. Doubtfire royally screws up her schedule ...

... And finds herself "forced" to attend a birthday dinner for Miranda as Mrs. Doubtfire and also a potentially career-making pitch meeting with his boss as Daniel Hillard at the same restaurant, on the same night, at the same time. This dilemma always perplexed me — surely there's a way around it, but hey, then there's no climax to the movie. Here are some work-arounds Daniel should have considered:

- Miss your ex-wife's birthday dinner. It's painful to continually witness this Stu guy steal your family. Does Mrs. Doubtfire really need to be there anyway?

- Insist the birthday dinner be moved to an earlier time. Because you are an old woman.

- Insist the birthday dinner be moved to a later time. Because you aren't dead yet.

- Change the time of the work meeting.

- Go home sick halfway through one of the dinners.

- Have an emergency halfway through one of the dinners.

- Call in a fake bomb threat to the restaurant. Maybe use one of those prank callers from earlier in the film for inspiration.

- Don't drink at either of the dinners. Or just choose one to drink at. Mrs. Doubtfire has about three glasses of Chardonnay, while Daniel has at least four double scotches. All in the span of about 20 minutes. No wonder he forgot to take his lipstick off. No wonder she loses her teeth. And her face.

16. That time Mrs. Doubtfire locks herself in an upscale restaurant's restroom intermittently for an entire evening ...

... And nobody complains as she changes her/his outfit, hair, face, and gender, meaning that for at least 10 minutes at any given moment, none of the other patrons in the whole restaurant can access the bathroom or else they'd see this:

17. That time Mrs. Doubtfire reveals she takes her medicine rectally.

"I can't take it orally," she announces inexplicably to the entire table at Miranda's birthday dinner. And Miranda is like:

18. That time Daniel's boss (this guy here) sort of suggests they have a foursome in his stretch limo with a waitress and her friend ...

She sneaks into the restaurant's kitchen and puts a shitload of cayenne pepper on Stu's jambalaya, knowing full well that Stu is very allergic to pepper.

20. And, of course, that time no one got mad at Mrs. Doubtfire for trying to kill someone.

His kids were cool with it; Miranda was like, eh, whatever; even Stu shakes his hand once he catches his breath; and in the end, Mrs. Doubtfire scores joint custody and a hit children's TV show.