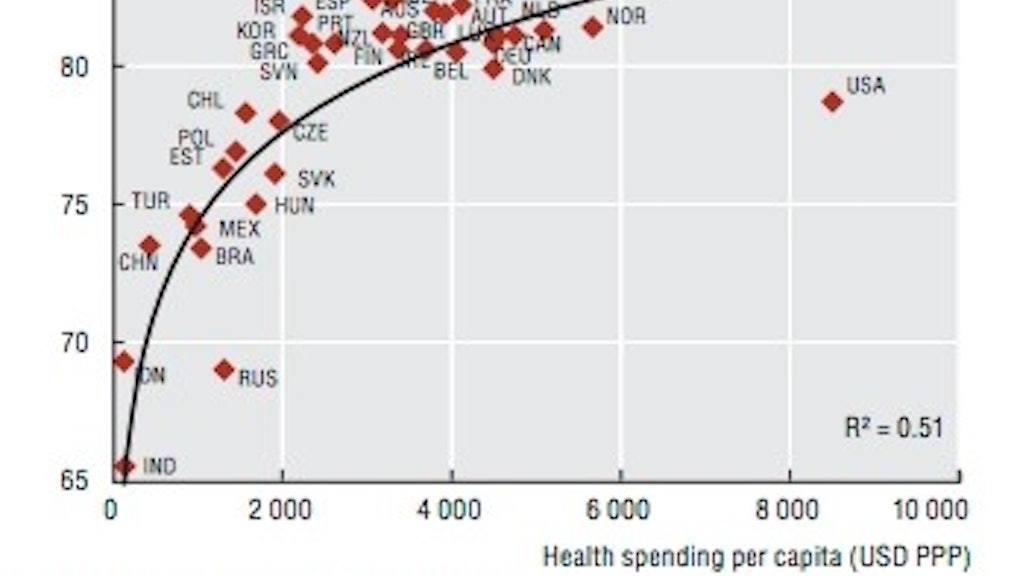 Take a look at this startling chart from the Incidental Economist showing how much money different countries spend on health care per person, charted against life expectancy at birth in each of these countries. What do you notice?

There’s one country that’s an outlier unlike any other in the world: the U… S… of A. That’s right, America – the richest country in the world and the land of the free and home of the brave – is spending so much more than every other nation on health care that’s simply not working, it’s not even funny.

We can debate whether life expectancy is the perfect metric of public health (I believe one of the core goals of a health care system should be to keep people alive longer), but regardless, the graph makes perfectly clear that the U.S. has one of the least efficient health care systems among the world’s advanced economies. Put differently, people live longer in almost every country in Europe, including the cash-almighty nation of Greece!

If you’re still not convinced, check out this data visualization from Bloomberg, which confirms that America spends the most on health care on a relative cost basis in the developed world, and with the worst outcome.

Which brings me to the real point. House Speaker John Boehner may say otherwise, but America’s health care system is broken. Completely, utterly broken. And whether or not Obamacare is the perfect solution to fixing current woes, it’s at least a solution. And, Republicans who continue calling for Obamacare to be defunded, delayed, and repealed have yet to offer a real alternative to the free-market, insurance company-driven health care system which has absolutely failed America.

So, here’s my simple message to the Tea Party: stop telling us President Obama is “cramming socialized medicine down our throat” and start sketching out real policy solutions that make the system better.

Here's a revealing interview between Sarah Palin and NBC’s Matt Lauer, in which the Tea Party darling can't articulate a single alternative to the current system that would be better than the Affordable Care Act (it gets really good around minute 1:40):

Until Republicans can articulate clear and achievable policy alternatives to make the Affordable Care Act better, hollow calls for repeal will fall on deaf ears, particularly for young people. If the GOP wants to win over millennials in 2014, they must show our generation why to take them seriously.