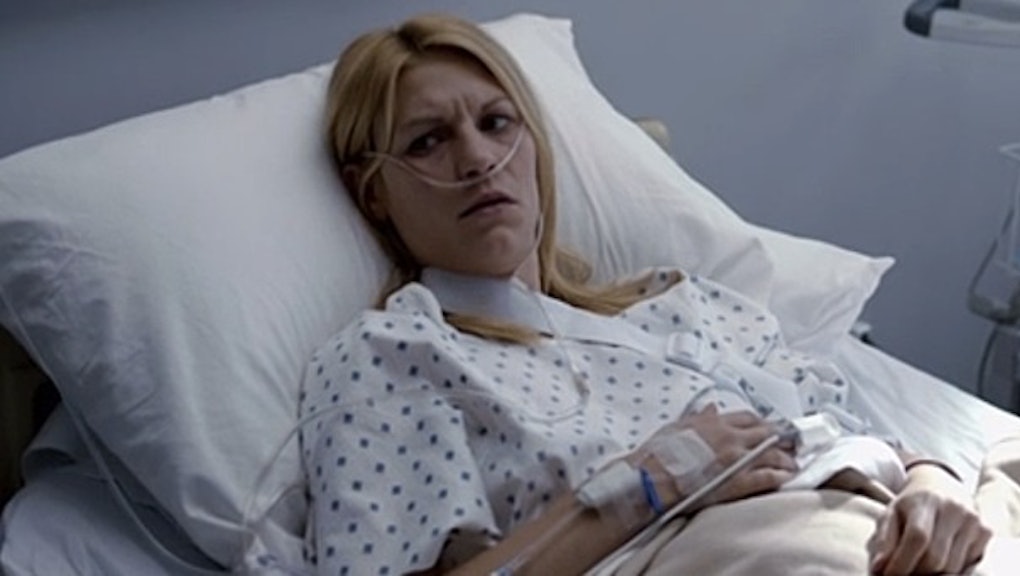 'Homeland' Season 3 Episode 9 Recap: 'One Last Time' is the Best Episode This Season

Homeland loves to bat us back-and-forth between snooze-fests with twist endings and white-knuckle thriller episodes. It's become Homeland's MO — the show isn't getting bad; it's just in one of its trough phases. It'll get better. And it does.

There's nothing like shrewdly done withdrawal sequences, training montages, and reunions. "One Last Time" makes these tropes into something gritty and fierce, and it does it all without any twist endings. And no, the episode wasn't perfect. There's no crazy Carrie moment this week. Instead, it's Saul's idiotic and impulsive decision that creates some turbulence in an otherwise solid episode. More on that later though.

We kick off with Carrie recovering in a hospital. Her doctor informs her she'll be fine, and then snidely adds that the 13-week old baby she's carrying will be okay. Is his snideness justified? It's difficult to watch Carrie putting her career in front of her own child, even stepping into the line of fire while pregnant because of "the mission." It's an odd fusion of altruism and insanity. But it's a quality that keeps us wrapped up in Carrie's character. We don't know what the hell she'll be doing next in the name of her country and her mission to protect it.

Lockhart later comes into her hospital room with his dickish mannerisms to pester Carrie about Saul's plans. She, of course, gives him nothing. He does, however, reveal his knowledge about Caracas, which will later bite him in the ass.

Brody's going cold-turkey (no methadone) after his heroine binge in Caracas, recovering in a spec-ops-operated Virginia military facility. In a Trainspotting-esque sequence, he sees his old pal, zombie Tom Walker, singing the first stanza of the Marines' Hymn as Brody goes nuts, trying to get a shot from an empty syringe while the spec-ops team holds him down. The hallucinations are a result of Dar Adal's decision to speed up Brody's recovery with Ibogaine.

Why is he at the facility? Turns out that Brody is scheduled to be trained by the spec-ops unit in less than a week, initiating the second phase of Saul's master plan: inject Brody into Iran as a hero of the revolution and get him close enough to the big cheese, General Akbari, Javadi's superior, to assassinate him. With Javadi already an asset, Brody's climb up the Iranian regime ladder is all but guaranteed.

The best thing about the spec-ops training montage after Brody recovers from withdrawal? It's not cheesy, it's just slick and believable. And how often do we get cool montages?

We finally get what we've been waiting for: Lockhart gets what he deserves. Saul instructs Virgil and Max to watch his house after finding out that Lockhart taunted Carrie in the hospital about Caracas. Who else do they see but Mira's (ex) boyfriend casually broaching the place, subsequently meeting with Lockhart. They go inside and find the bug in Saul's computer mouse (not a USB stick, as I've said in my last recap — thanks to Tim Norkus for the correction). What does Saul request after confronting a pale-faced Lockhart? An extension of his temporary directorial position. That's it. He's not even going to bury Lockhart with this information, or take over as director — he just wants an extension. Apparently the reveal would "humiliate his wife" and "damage the agency."

As if Saul's sheer badassness wasn't enough to make the episode, we get an unforced, candid Carrie and Brody reunion. The most intimate gesture the two share is a smile and a laugh; they both know that their cabin days are a far-off reality, a dream. Carrie is still, under Saul's direction, convincing Brody to do the U.S.'s dirty work in exchange for Brody's saving face and the chance, one day, to be reunited with his kids.

And Brody does indeed see Dana before he departs to Iran, but after a brief exchange he realizes that telling her he's innocent won't erase all the grief she had to go through.

But amidst all this television glory there is that peculiar stain that just doesn't feel right ...

What Crazy Thing Did Saul Do This Week?

It makes no sense. During his withdrawal, Brody declared he wants to die. Saul decides actually to test this theory. What does he do about it? he takes Brody out into deep waters and lets him drown. Brody sinks like a lugubrious rock and a few spec-ops marines have to retrieve him. What did this prove? Is this an idiotic CIA tactic?

Luckily, with such solid and entertaining plot development in "One Last Time," and a Dana scene that actually contributed something, this little pocket of strange can be comfortably shoved under the rug.

With such anticipation built up without the need for a cold-water twist ending, this is Homeland's best episode this season.