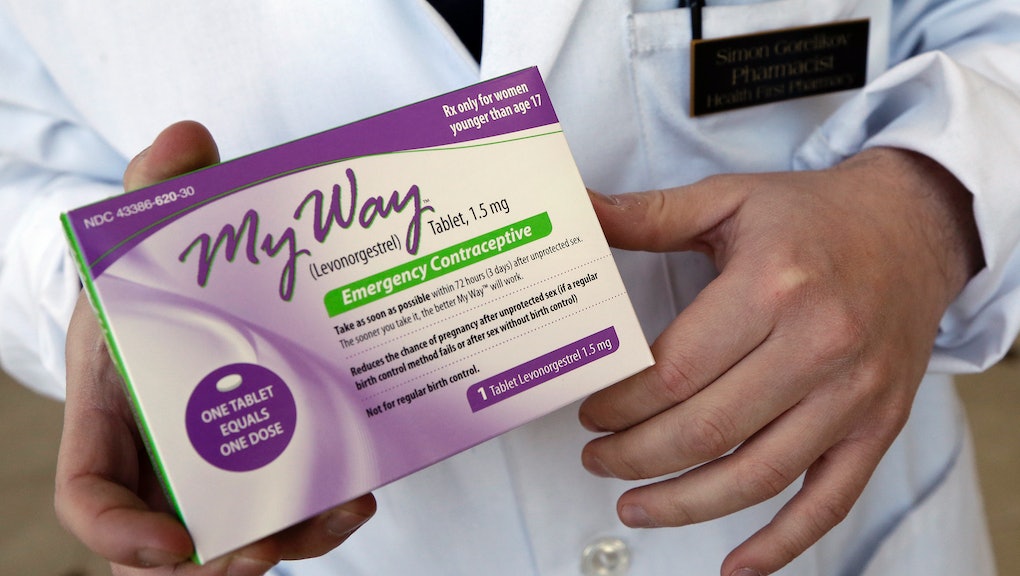 Turns Out Plan B Might Not Work For Some 20-Somethings

On Monday, the European manufacturer of a drug identical to Plan B announced that it will be changing its packaging to warn that the drug begins to lose effectiveness in women over 165 pounds and is completely ineffective for women over 176 pounds. Though it remains unclear if this regulation will come to the United States, the news does mean that the morning-after pill likely doesn’t work for the average American woman over 20, who weighs 166 pounds.

Earlier this year in a momentous reproductive health decision, a federal judge ordered the U.S. Food and Drug Administration to make Plan B, the morning-after pill, available over the counter to people of all ages. Nancy Northup, president and CEO of the Center for Reproductive Rights, hailed the landmark court decision as a "victory for all women, particularly young women, women without government-issued identification, and those who live in areas with limited pharmacy hours."

The victory of having emergency contraception widely accessible has been recently shadowed by the discovery that it is by no means designed for "all women."

Previously, the big controversy over emergency contraception had been over whether or not young women could access the drug in the first place. Now, it seems that the drug, which usually retails for around $50, might not even work for a large percentage of those women, presenting a huge issue for young women ages 20-24, of whom 1 in 4 have used emergency contraception according to the Center for Disease Control and Prevention.

Beyond the bad news that many 20-something women may not be able to use the drug, the fact that its effectiveness was initially only tested on thin women showcases the degree to which our culture de-sexualizes certain bodies, thereby affirming which "kinds" of people deserve what care.

The message that pharmaceutical companies are sending is that fat women don’t have sex, so they don’t need emergency contraception.

At Mother Jones, the outlet which broke the story, reactions to the new regulations have been grossly fat-shaming and slut-shaming. "Crossing your legs works for women of all sizes," wrote one commenter. "Why would fat girls even need this, no one wants to fuck them," added another. They should be grateful someone even wants to have sex with them, regardless of what happens afterwards, seems to be the attitude.

Such comments smack of America's pervasive fat stigma, which defines fat women as lazy, passive, and unfuckable, as well as our attitude that sexually active women should be villainized for wanting to have sex without getting pregnant. The fat, sexually active woman, therefore, is a sexual deviant inherently undeserving of sexual attention, and, it seems, contraceptive care.

In a world where all women are demonized for wanting control over their bodies and choices, the stakes are even higher if you aren’t a woman that fits into our narrow standard of beauty and acceptance. Last month, the blogosphere was abuzz with Everyday Feminism’s discussion of thin privilege; only testing a drug's effectiveness on people with your body type is a clear example and perpetuation of that privilege.

Dot Goldberger, a Hampshire College alumna and self-identified queer, fat, feminist who has taken the drug twice, found the news about emergency contraception both upsetting and demeaning. She says, "As a fat woman who has been told both directly and indirectly for years that her body is undeserving of positive attention and attraction, we don't need yet another message that the world works better for you if you're skinny. This only makes it more clear that fat women are not seen as a priority, as worthy.

"Maybe just let the scientists work a little bit longer before you put the drug on the shelves, okay? Then we'll have a drug that works for more than just 70% of the population with ovaries."