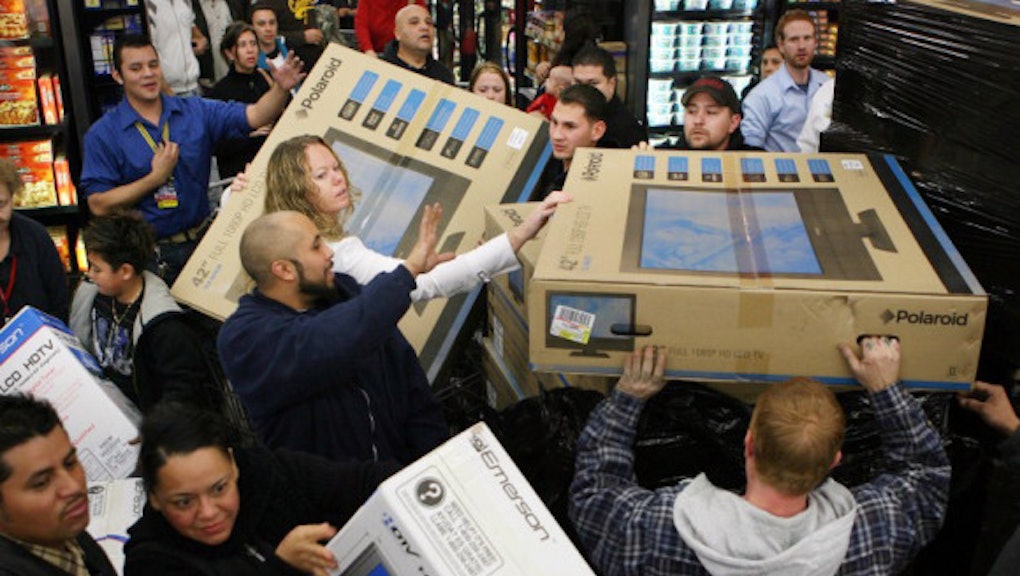 As Americans plan on observing Black Friday, it's worth taking a few minutes to observe the origin of this infamous "holiday."

Although the term "Black Friday" was initially coined in reference to an economic panic caused by financiers Jay Fiske and Stephen Gould on September 24, 1869, it was first used to refer to the shopping day immediately following Thanksgiving in the November 1951 issue of Factory Management and Maintenance. Even then, however, the title didn't take off in usage for another decade, when Philadelphians in 1961 began using it to refer to the post-Thanksgiving consumer frenzy that had gripped their city. The rest, as they say, is history.

And what an ugly history it has been. To list some of the more infamous recent incidents:

- In 2008, a Walmart employee was trampled to death as customers stormed the store while four other shoppers, including a woman who was eight months pregnant, were injured.

- Also in 2008, two men shot each other to death at a Toys R Us after a fight erupted between the women accompanying them. Although the shooting was confirmed to have been unrelated to consumerism, the heated emotions inspired by Black Friday almost certainly played a role.

- In 2011, a 61-year-old man collapsed from a heart attack while shopping as customers passed by him either unaware of or indifferent to his condition.

- Also in 2011, a woman was arrested for pepper spraying other customers (including children) who tried to buy an XBox so she could make sure she had the first one.

- Last year, a man faced charges after he was videotaped threatening to stab other customers who pushed him or his children while waiting on line at a Kmart in Sacramento.

So why does Black Friday bring out the worst in us? And more importantly, what can we do about it?

Insofar as the psychology behind Black Friday is concerned, the best explanation was recently featured in a Huffington Post article. One element at play is the "scarcity principle," which involves people becoming instinctively obsessed with obtaining items that they believe are rare, will soon run out, or are difficult to obtain. Because Black Friday has been promoted as the ideal time to acquire valuable consumerables at low prices, it feeds into this impulse. Exacerbating it is the "social proof principle," wherein people follow the example of large groups around them because if they see others affirming something's value, they assume that it must indeed be good. Because Black Friday is trumpeted up by everyone else, they reason, it must indeed be worth prioritizing.

How can we handle this?

For one thing, it's important to keep our heads on straight no matter how many people around us are losing theirs. While Black Friday may offer great deals and access to first-out-of-the-assembly line gift options, it is hardly the only opportunity consumers will have to buy the products they want at prices they can afford. Just because everyone else is chomping at the bit doesn't mean that they have good reason for doing so. If you don't want to feel like a cow in a herd, you can start by avoiding cattle-think.

It's also helpful to look at the list of horror stories included at the beginning of this article. Ever since the advent of the digital age, it is impossible for people who behave like truly egregious jackasses not to get noticed and publicly humiliated as a result. No matter how tantalizing that offer may seem, or how infuriating the behavior of your fellow shoppers may be, do you really want to appear on lists like the one featured here? Shame can be a valuable tool for social management, and Black Friday is a prime case of that.

Finally, it may be helpful to remember the true spirit of the holidays we're celebrating. As I explained in my last piece on Thanksgiving shopping, it's easy to let dollars and cents get in the way of decency and common sense. Whether you're celebrating the religious Christmas, the secular Christmas, Channukah, Kwanzaa, Festivus, or another holiday altogether, it's important to realize that materialism — though one of the undeniable guilty pleasures of such events — is not the ultimate point therein. If people just kept that thought in mind, Black Friday might not have such a terrible connotation.