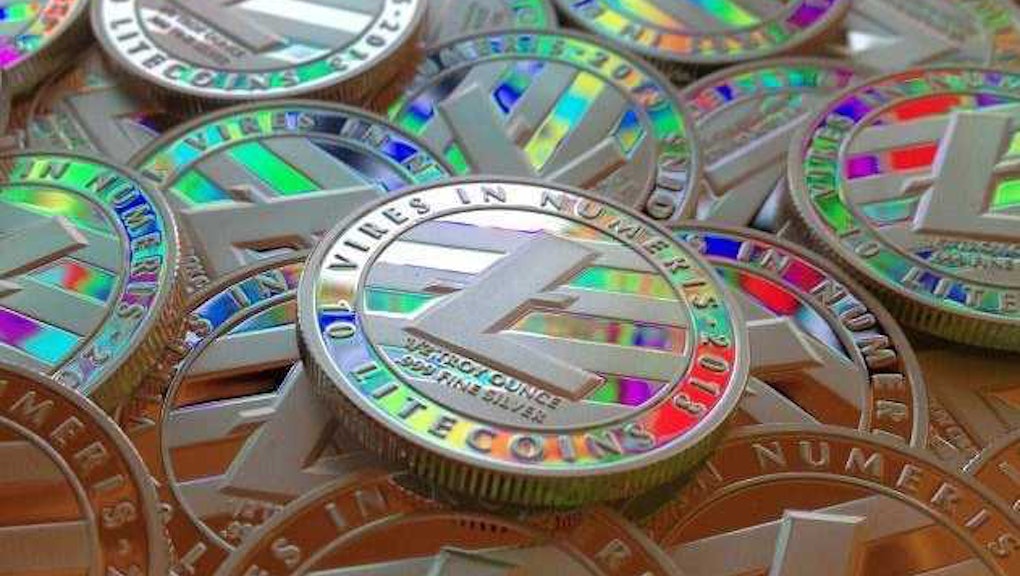 The news: Meet Litecoin, the digital currency that's growing even faster than Bitcoin you haven't heard about.

Bitcoin now costs over $900 and threatens to price out its entire mainstream market. In 2011, former Google employee and MIT graduate Charlie Lee built Litecoin to correct some of Bitcoin's minor flaws and make "small changes that made [Litecoin] a little bit better."

Described by Lee in an interview with Business Insider as "silver to Bitcoin's gold," Litecoin has grown in value over 400% since Monday and is "more abundant, and more lightweight" than the original currency. While there will only ever be 21 million Bitcoins, a fixed point which keeps prices plump, there will be up to 84 million Litecoins at total market saturation. This keeps prices quite a bit lower than Bitcoin (Litecoin is now worth around $25), but isn't a guarantee against price inflation down the line.

It's also designed to generate more Litecoin using computer memory rather than processing power, an increase in required hardware which will discourage people from a digital arms race to generate more Litecoin. Finally, it boasts much faster confirmation times (the process by which Bitcoin users verify each other during transactions), making it a little more convenient to use in real-world transactions.

"If Litecoin truly succeeds, people will be using it for everyday purchases, and Bitcoin for large purposes," claims Chen.

With Bitcoin spiraling out of price control, a lot of speculators are making a lot of money - but simple economics says that it's going to be accompanied by a heck of a crash. (How much damage the crash will do to Bitcoin is ultimately irrelevant, because built-in market volatility is a feature of the currency, not a bug.)

"Bitcoin is built on a weird mix of the most old-fashioned kind of speculative greed, bolstered by a contemporary utopian cyberlibertarian ideology. Boosters say that bitcoin is the currency of the future. I'd argue that the phenomenon is a digital gold rush perfectly emblematic of the present.

... the crash is going to be great. Bitcoin is too dependent on speculative mania to be of practical use as a currency."

By tempering some of the madness built into Bitcoin, Chen's version of digital currency is a little bit more stable and little bit more functional for its intended purposes.

So should I get Litecoin or Bitcoin? Both are probably good investment bets for someone willing to take a lot of risk, because they're both pretty much guaranteed to increase in value continuously unless something so disastrous happens that other investors flee the market. If you've been priced out of Bitcoin, Litecoin seems like a good alternative.