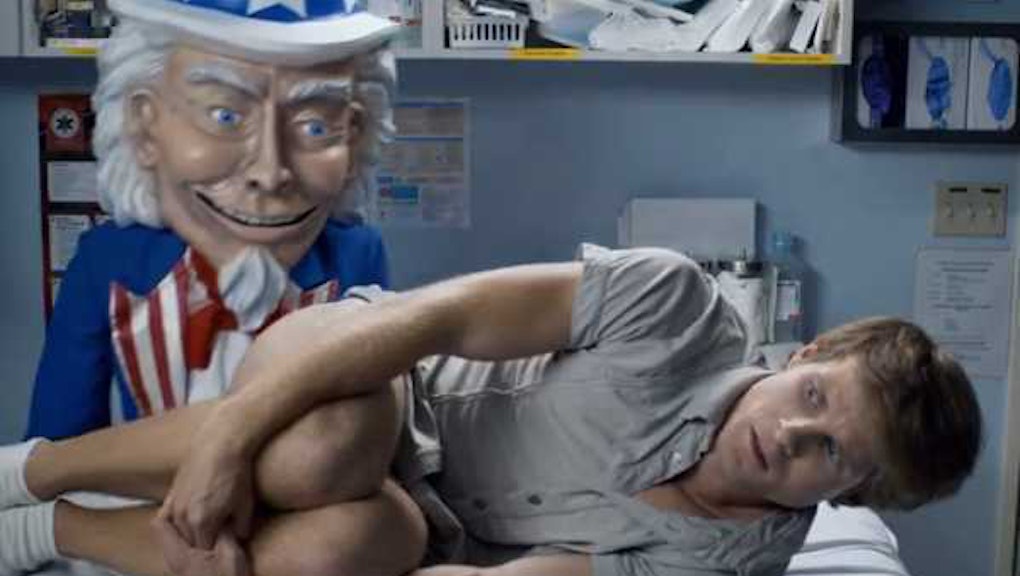 The Anti-Obamacare Ads Have Been Nothing But Fear-Mongering Drivel

I'm not sure which prospect is more frightening: That Obamacare's opponents are deliberately lying or that they believe their own bullshit.

This isn't to say that the Affordable Care Act hasn't had its hiccups. Certainly there is no excuse for the technical incompetence that has plagued the website since its launch or for the president's dishonesty regarding whether Americans who preferred their current health insurance plans would be able to keep them.

At the same time, the right-wing has been lying in their charges against Obamacare long before the truth supplied them with legitimate criticisms. The laundry list of conservative calumnies is long, from their allegations of the existence of death panels (which involves distorting aspects of the law such as the role of the independent payment advisory board) to their claims that the ACA was a socialist measure (despite the bill's practice of government intervention in the private market tracing back to our founding fathers, as opposed to the genuine socialism of the single payer plan that the Obama administration never supported).

We can start with the most offensive of the bunch, a pair from the "Creepy Uncle Sam" series sponsored by the Koch Brothers' right-wing political group, Generation Opportunity. In one ad, "The Exam," we see a millennial girl who has signed up for Obamacare elevate her legs for what is presumably going to be a gynecological check up. As soon as her doctor steps out of the room, however, a grotesque Uncle Sam mascot suddenly rises up, his head first becoming visible as it emerges from the foreground between her legs. Cue the girl squealing in protest, the screen text urging: "Don't let government play doctor. Opt out of ObamaCare [sic]," and the ad closing with Uncle Sam ominously widening a speculum.

Another installment, "The Glove," follows the same essential formula.

Certainly these commercials do little to help the Republican Party's image of insensitivity to rape. Although they spare us the actual sight of Uncle Sam subjecting millennials to unwanted OBGYN and proctological examinations, the implication is still clear — seeing a doctor under Obamacare will be akin to getting molested. Indeed, that is the ONLY message one could glean from these spots. It's not like they contains a wealth of information or assorted charges about the flaws of the Affordable Care Act. Once they establish their premise of "millennial seeing doctor for the first time after enrolling in Obamacare," they devote the remainder of their time to the "Creepy Uncle Sam" theme, foregoing any attempt at rational persuasion and aiming straight for lowest common denominator scaremongering. It's enough to make one think that our debate culture needs a new version of Godwin's Law, the famous rule that the first side in an argument to compare an opponent to Adolf Hitler and/or Nazis automatically loses: There is a direct correlation between the emotional intensity of a given debate and the likelihood that rape analogies will be used.

Unless the subject under discussion literally involves one party potentially or actually forcing sex on another, any side that draws a rape comparison immediately forfeits the moral and intellectual highground.

Compared to "Creepy Uncle Sam," there is something downright respectable about the Republican National Committee's "I'm Obamacare" series, which parodies Apple's "I'm a Mac/I'm a PC" campaign by contrasting a boorish and slovenly Obamacare spokesman with a well-groomed and articulate counterpart representing the private sector. If nothing else the ads deserve credit for addressing the content of the Affordable Care Act instead of playing on visceral fears; what's more, some of the spots actually hit pretty close to home. "That's A Lie" and "Keep It," for example, are punchy and memorable in their skewering of Obama's false promise that all Americans who liked their existing insurance plans would be able to keep them, while "Glitches" and "Down" scathingly highlight the embarrassing technical headaches of the Obamacare health exchange website. The other entries, alas, indulge in the same misleading partisan hackery that has already disenchanted vast swathes of the body politic: "Wedding Tax" repeats the debunked claim that the Affordable Care Act penalizes married couples, "You Owe Me" wrongly claims Americans who couldn't enroll for insurance due to website malfunctions will still be penalized under the individual mandate., and "Whatever" and "Fired" offer little more than petty swipes at President Obama and Secretary of Health and Human Services Kathleen Sebelius (respectively).

Again, these ads are a world better than "Creepy Uncle Sam," but that isn't saying much. While it may be naive to assume that they would actually mention the good that ACA has already done and is slated to do next year, it is noteworthy that they avoid even touching on the central issues that drove the health care reform movement in the first place. Love it or hate it, this bill was passed because millions of Americans have languished without health insurance for generations, a problem that conservatives have refused to acknowledge, greeted with platitudinous free market panaceas, or met with the claim that uninsured Americans actually deserve to die. The one thing that the "Creepy Uncle Sam" and "I'm Obamacare" ad campaigns have in common is that, regardless of whether they're distracting you with fearmongering or the partisan talking points of the moment (valid and invalid alike), they don't want you to pay attention to the real human tragedy of the pre-Obamacare medical system. Even if the ACA fails, the problems it was created to address will still exist. Conservatives, unsurprisingly, have nothing to say about that.