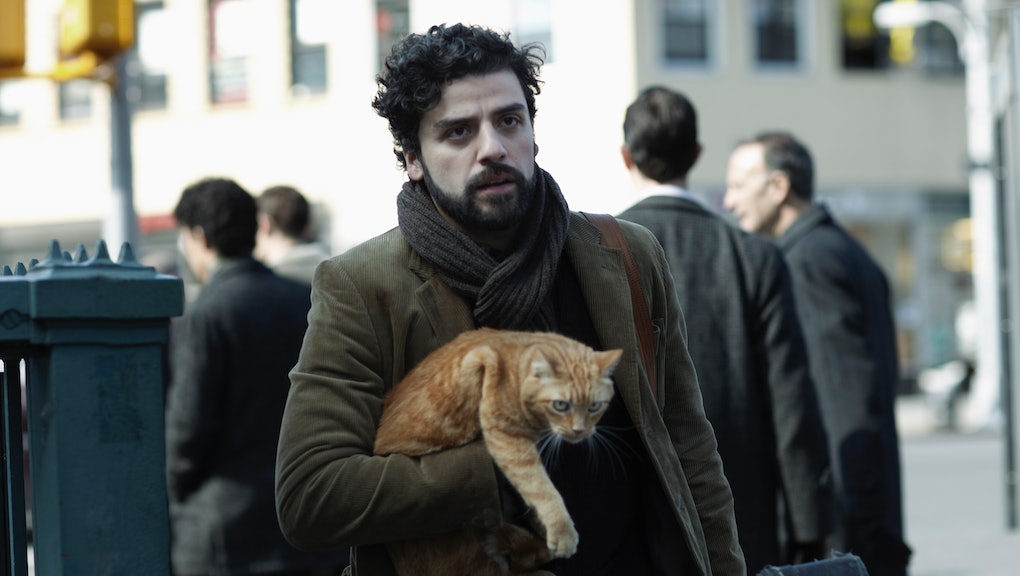 Inside Llewyn Davis has a lot of existential angst for a film made by two men in their 50s. Not that I was expecting anything particularly cheery going into this latest offering from the Coen brothers; after all, this is the same duo who dreamed up one of the most terrifying villains the world has ever known. But I was still unprepared to find my own 20-something concerns about the future so perfectly reflected in a quiet story about a failing artist in early 1960s New York City.

The film takes place during a neglected moment in music history after the hey-day of folk revivalism, but before Dylan arrived and injected new life into a dying scene. Llewyn Davis is a struggling musician trying to make it on his own after his slightly successful folk duo falls apart, the other member having thrown himself off the George Washington Bridge. (John Goodman's jazz cat character aptly points out, "You throw yourself off the Brooklyn Bridge, traditionally. George Washington Bridge? Who does that." Leave it to the Coens to find the comedy in suicide.)

Davis isn't starved for talent, but he doesn't have the charisma he needs to cut it as a solo act. His career is further hemmed in by the fact that the old standards he sticks to lack broad appeal — refrains like "hang me, oh hang me" don't exactly spell commercial success. Without an apartment, steady income, or winter coat, Davis depends on the begrudging hospitality of friends to stay afloat. Despite being entirely unmoored, he goes nowhere.

When asked at the New York Film Festival's screening why he decided to tell a story about failure, Joel Coen responded, "The success movies have been done, haven't they? It's less interesting, from a story point of view." He has a point. Inside Llewyn Davis contains some gems of signature Coen dry wit, but it ultimately leaves us — if not bereft — a little broken. Though the film takes place over 50 years ago, its concerns hit close to home for those coming of age today. The tenets of millennial-dom — massive debt, endless war, incriminating internet footprints — seem to have already ensured that our futures will be less secure than were our pasts. Career paths and family planning are more muddled than ever before, and the promises of success we were raised on carry increasingly less weight.

And yet, the common cinematic 'success narrative' has primed us to keep waiting for our hero's fortune to change, even as the inevitability of his failure becomes only more apparent. This isn't particularly surprising. Oversimplified accusations of narcissism and apathy aside, ours is still a generation brought into our extended adolescence with the expectation that if we work hard enough and long enough, the disjointed facets of our lives will come together regardless of how lost we feel. And people tend to remain optimistic about their futures in general because it's easier to imagine success than failure.

Implicit in this sense of universal justice is the acceptance that our lives are, in some ways, out of our hands. Faith in the future is simpler and more comforting than agency, wherein every decision we make has the potential to send us careening in the wrong direction.

Davis and his fellow musicians are driven by an obsession with authenticity, playing only the old standards that predate folk's pop commercialization. The songs evoke a simpler, mythologized Americana that exists in sharp contrast with the crowded streets and cramped apartments of New York City. Perhaps our own well-catalogued obsession with nostalgia similarly stems from the fact that adherence to the familiarity of the past delays the uncertainties of the future, and quiets the questions that come with growing up in changing times.

Inside Llewyn Davis doesn't offer easy answers. It instead suggests that, sometimes, continued efforts in the face of defeat are misguided rather than heroic; for Llewyn Davis, they just send him in circles, and he ends up (literally) where he started. Davis is living in a moment that falls in the cracks between music's future and its past, and leaves men like him as emotionally destitute as those in songs like "Fare Thee Well" and "500 Miles." But this is less a film about being left behind than it is about letting go — of the past, of partners, and, ultimately, of dreams.

Davis' journey is nothing new — for every artist who makes it, there are hundreds more who never will become what they've imagined. But the lesson it has to offer is no less valid than the Cinderella stories that so often grace our screens. Maybe growing up doesn't mean giving up. Maybe it means that forward motion just comes with a few farewells. Maybe only in accepting the reality of failure can we appreciate our moments of success, in which, in spite of it all, I can't help but believe.

'Inside Llewyn Davis' opens this Friday in select theaters.