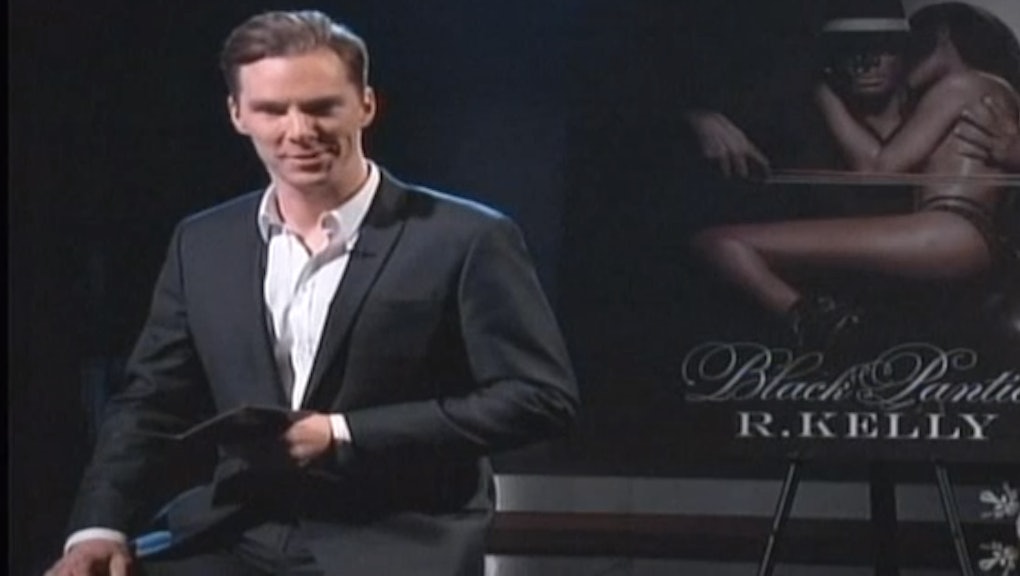 Warning: I'm about to get my man crush on.

Benedict Cumberbatch. Has a name ever held so much dignity in its imagery? A last name that sounds like a whole host of formal wear sashes for late night, and a rebellious first name that is drizzled in the hollandaise sauce of a morning after’s rich breakfast. From his name alone, his acting range should come as no surprise. His roles have ranged from a physically crippled genius physicist, to a superlative Dragon from Middle Earth, to a time-displaced intergalactic warlord, and his velvety British timbre has always carried the day. Look to IMDB for his list of trademarks, and "rich baritone voice" is right up at the top.

On Jimmy Kimmel Live! last night, we finally saw the greatest test of his actorly powers. Benedict, for our listening and viewing pleasure, read the lyrics to "Genius" by R. Kelly.

The old saying for voice acting is that if you believe it when you read it, they'll believe it when they hear it. Lesser actors, say a Shia LeBeouf or a Liam Hemsworth, might come across as insincere or hackneyed when trying to deliver lines like "I'mma hit that thing again" as poetry. Not Cumberbatch. He sucks in a breath to strum across his vocal chords and his heart strings, then exhales in a flirtatious tickle across our funny bones. For that, we should love him.