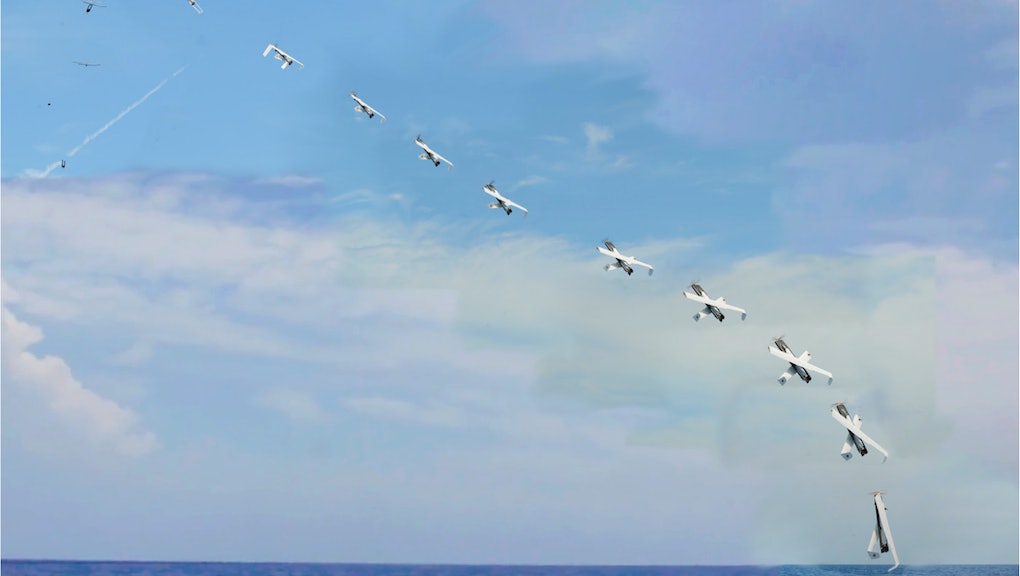 The Navy Has Developed a New State-Of-the-Art Drone

The news: Not to be outdone in drone news this week, the Navy pulled off a successful launch of a drone from a completely submerged submarine. The USS Providence shot the unmanned drone from its torpedo tube while entirely underwater.

Named the eXperimental Fuel Cell Unmanned Aerial System (XFC UAS), the drone launch is the culmination of six years of research by the U.S. Naval Research Laboratory, with contributions from the Office of Naval Research and the Department of Defense Rapid Reaction Technology Office. The drone, shot from the submarine's launch system for Tomahawk cruise missiles, is powered entirely by electric fuel cells and can operate for up to six hours.

The backstory: The U.S. military has been making waves with drone advancements this year. In July, the X-47B drone successfully landed on an aircraft carrier, making it the first unmanned vehicle ever to do so.

Because of the high difficulty in landing on an aircraft carrier, even for manned vehicles, the X-47B landing was considered to be historic, something to be remembered by generations to come. And now the Navy is launching drones from underwater.

Why this matters: This will be a huge boon to the Navy’s special operations. Dr. Warren Shultz, program manager at the Naval Research Laboratory, said, “This six year effort represents the best in collaboration of a Naval laboratory and industry to produce technology that meets the needs of the special operations community.” The XFC UAS provides an “unprecedented paradigm shift” in Naval operations.

What this means is that the U.S. military can now launch a drone from virtually anywhere, land or sea. It’s just further evidence that drones are the future of warfare, for better or worse. The military is working, apparently tirelessly, to eliminate any restrictions to drone warfare. Now, not even an ocean can stop a drone launch. Hail, robots.