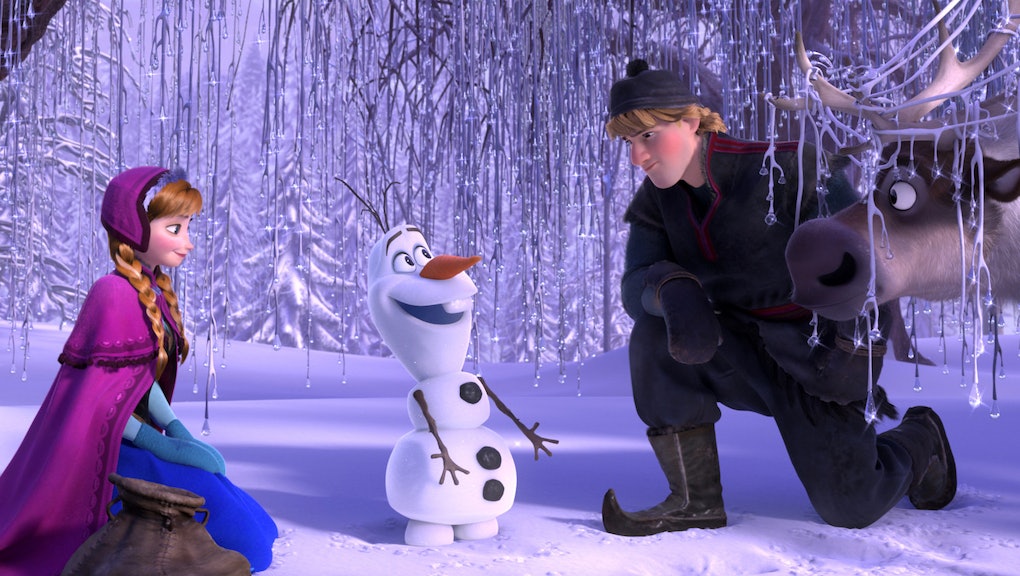 Why Children's Movie Audiences Are Filled With 24-Year-Olds

Frozen, Disney's latest animated feature, broke box office records upon its release. With a $93 million opening, it is the highest grossing Thanksgiving debut of all time. And surprisingly enough, it wasn't only families with young children flocking to the theater. With 81% of the audience composed of families, Disney predictably reeled in its target audience with ease. But that number also means that almost 20% of the audience were non-families. That's almost $18 million in ticket sales.

This trend is not limited to Frozen. The 2011 re-release of The Lion King in 3D opened with $29.3 million and only 74% of the audience was comprised of families (18% of non-families were couples, because apparently The Lion King makes a great date movie). And Toy Story 3's non-family audience was 40% 17 to 24 year olds.

It's clear from these numbers that this animated family fare is not just for families anymore. More and more millennials are going to the cinema to see films traditionally marketed to a much younger demographic, and that's not even taking into consideration viewing habits on outlets like Netflix. Film companies have caught on, too; When the Muppets made their return to cinemas, for example, a large part of the film's marketing campaign was targeted at an older audience — viral videos and appearances on Saturday Night Live are definitely not meant for the average 10-year-old. So what is leading this trend?

With the animation of today hearkening back to the heyday of the 1990s (Frozen is described as a throwback to animated musicals like Beauty and the Beast), saying that my generation is simply reliving the memories of our childhood is an easy way to explain this growing trend. But while this may be true in part, the lure of animated and young adult features to millennials is much more complex than pure nostalgia. After all, the baby boomer generation isn't buying up all the copies of animated films from their childhood like Snow White and the Seven Dwarfs and Cinderella.

Given the oft-discussed circumstances millennials currently, it's no wonder more and more 20-somethings are deferring adulthood. Animated and young adult films offer a simple, pure form of escapism. As we deal with financial and political unrest, it's reassuring to watch a film where we know the stakes and the outcome. There is no moral ambiguity or uncertain endings; good will prevail. If the hero works hard, he or she will win — something no longer guaranteed for the real life of Generation Y.

Yet I know my love of Brave is more than simple escapism and attempts to put off adulthood. As many like to point out, millennials have a vastly different relationship with entertainment than those before them. Above all, we value quality and originality, and in this sense animation and young adult fare are leading the pack. Over the past decade or so, there seems to have been an animation renaissance as the best animated films of the decade have become leaders in creativity and imagination (Monsters, Inc., How to Train Your Dragon, Brave, Shrek, the list goes on). Quality stories and not just cheap laughs are at the heart of younger fare — just look at the reviews for Up, Toy Story 3, and Wreck It Ralph. These are some of the most critically acclaimed films in recent memory, and all have an official target audience of under 18-years-old.

This increase in quality not only relates to the plot but to characters as well. While recent numbers reveal that representation of women in film remains dismal, animated and young adult films very often feature women in leading roles. The highest grossing films this weekend are prime examples: Catching Fire, a YA film whose protagonist is teen heroine Katniss Everdeen, and Frozen, an animated film about two strong sisters that passes the Bechdel test with ease. It's clear that millennials want to see films featuring strong female characters (Catching Fire's audience was evenly split between those over and under 25). Mainstream adult cinema isn't giving us that option, so instead we turn to films like Brave, Tangled, and The Hunger Games.

While I'll always be nostalgic for the films I grew up with, I know my attachment to Harry Potter and Shrek is much more than wistful longing. They set themselves apart from others in mainstream Hollywood by appealing to our yearning for the simplicity of childhood, and lamenting a world of unoriginal, misogynistic adult fare. So while I await the next opening of the Disney Vault, I know that today's animators and YA filmmakers are looking towards the future. And I can't wait.