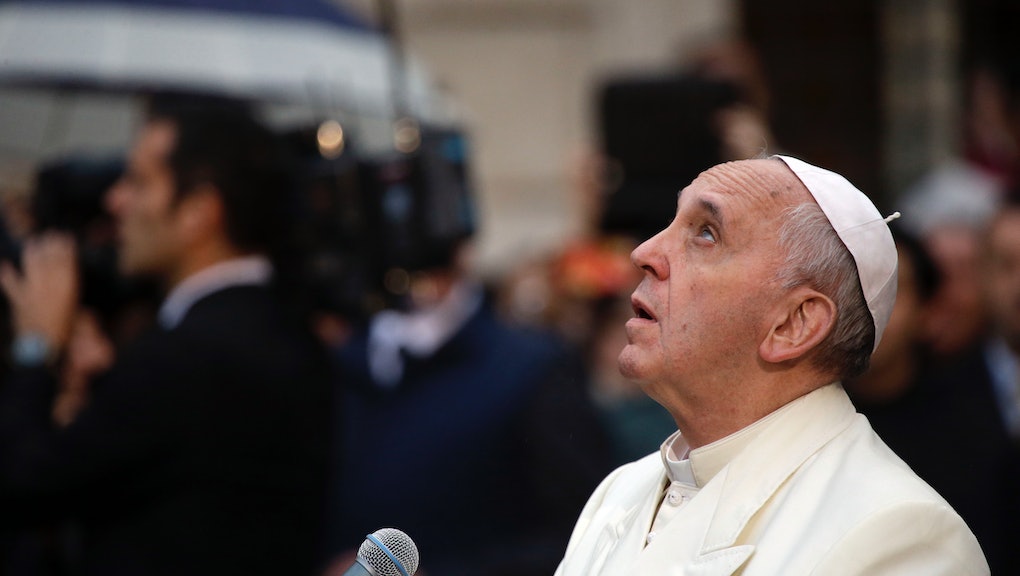 The news: There's no time for a victory lap. Just one day after being named TIME magazine's Person of the Year, Pope Francis took the first peace message of his pontificate to bemoan the severe wealth disparity plaguing the world — proving once again he's not afraid of broaching economic topics during his papacy.

Francis denounced the growing income inequality found throughout the world’s economies, citing "the widening gap between those who have more and those that must be content with crumbs."

He called it one of "the grave financial and economic crises of the present time" and said the income gap has distorted "security in consumption and earnings out of all proportion to the principles of a sound economy."

The backstory: As you're likely aware, this isn't the first strongly worded message that Pope Francis has given on the economy. Just last month, he published an apostolic exhortation that served, essentially, as a critical manifesto against capitalism. It was a detailed and savage tearing down of the empty promises of a free market economy — and he pulled few punches.

Francis went after the specific pitfalls he sees in the world's capitalistic economies, including the trickle-down system, which he said "expresses a crude and naïve trust in the goodness of those wielding economic power"; "widespread corruption and self-serving tax evasion"; and even growing inequality, in an economy "where the powerful feed upon the powerless."

All in all, Francis called the current state of capitalism a "profound human crisis." He's been outspoken and adamant on issues of the economy, so it shouldn't come as a surprise to anyone that now he's specifically taking on income inequality.

Why this matters: Well, it matters because he's right. Income inequality is indeed a huge problem around the world and here in the United States — so much so that President Barack Obama recently dedicated an entire speech to the matter. On Dec. 4, the president outlined a clear vision of inequality in America:

"The combined trends of increased inequality and decreasing mobility pose a fundamental threat to the American dream, our way of life, and what we stand for around the globe," he said.

So why are Pope Francis and President Obama going after income inequality so fervently? Let's take a look at the state of income in the U.S. and the world.

Here's the income share of the top 1% over the past 100 years or so. After a brief dip in the middle of the century, those at the top are back to holding an extraordinary share of income:

Now compare that to the bottom 99%. During the mid-century, they saw their income rise, and now they find their income stagnating:

Since 1980, the income of those at the top has increased significantly (the wealthier you are, the faster your income grows), while the bottom 90% has actually seen their real income decrease:

What's to blame for all of this? One explanation: the disproportional growth of corporate profits. While GDP growth and labor's share of income have remained sluggish, corporate profits have enjoyed steady increases over the past five years:

The evidence makes it clear: There is a significant wealth and income disparity between those at the top of the economy and all the rest. Those with lots of money make more of it, and everyone else is left to split up the remainder. So yeah, I'm thinking the pope might be on to something.