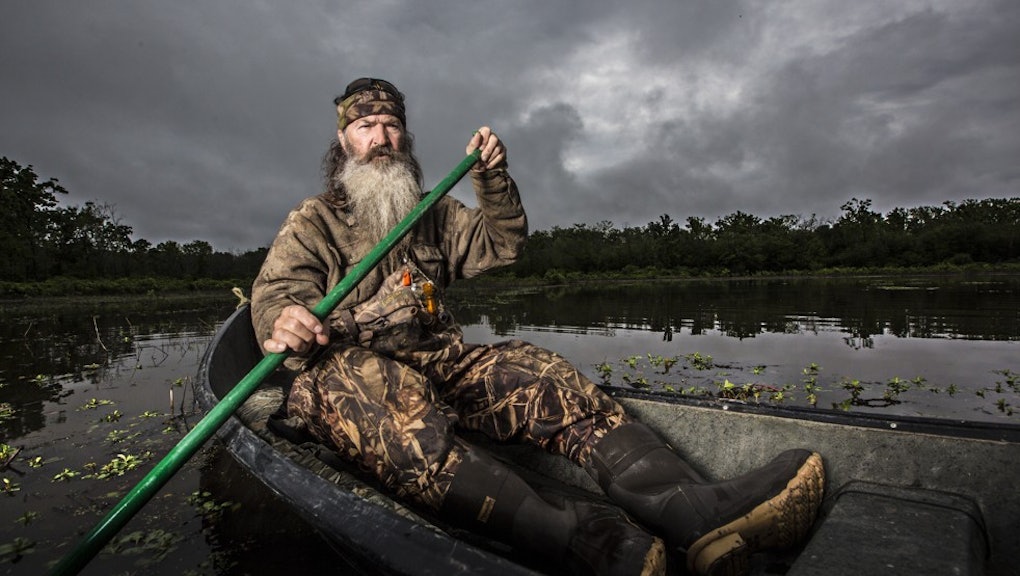 11 Times Everyone Freaked Out Over Dumb Celebrity Comments This Year

As Americans, we love a good controversy. But sometimes we go overboard, getting angry at what irrelevant celebrities say and do, as though they have serious implications for where the country is headed. At the end of the day, these people only have as much power as we give them, and it is absolutely preposterous to bestow unwarranted importance on them by engaging in a massive collective freakout at their comments. So without further ado, let this list of those we felt good about shaming in 2013 begin!

Phil Robertson is some guy with a wood lathe that made a device that emits the most annoying sound in the world to entice an animal with a brain the size of a snow pea — and we've come to the point where he has become an important voice on homosexuality. If this guy weren't on television, he'd blend in with the rest of the 45% of the people in this country who feel the same way he does. The fact that it took a man who wears camouflage in the shower— you know, in case a deer wanders into his bathroom — to get your blood boiling about this is ridiculous.

This year alone, Kim Kardashian has gyped typhoon victims by only donating 10% of her charity event proceeds to them (while taking a profit), and has posted pictures of herself shooting an Yves Saint Laurent-gripped pistol after tweeting about pledging to stop gun violence. The fact that anyone is paying attention to anything she says or does is absurd.

Fox News has a history of hiring attractive blondes to sell ridiculously biased news to Middle America, but Megyn Kelly outdid herself when she claimed that Jesus and Santa Claus were absolutely white: "Just because it makes you feel uncomfortable doesn't mean it has to change. Jesus was a white man, too. He was a historical figure. That's a verifiable fact — as is Santa." Anyone who thinks that Santa's existence is a verifiable fact should have his or her head checked, and if you got all hot and bothered over her comments, you should too.

The only blurred line here is America's sanity. After controversy about the supposedly chauvinist, sexist, and distasteful song that talks about how women know that they "want it," scores of people came out against him. Even people on this site have come out of the woodwork to bash it, and like the rest of America, they have no clue how to responsibly assess context, taking snippets of his words to make their case. And let's not forget that at the end of the day, giving moral weight to an artist who has the right to free speech and just wanted to make a hokey song is completely absurd. Many think Thicke's lyrics contribute to rape culture, because apparently, there are packs of sleeper cell rapists just waiting to be activated by a guy who uses wood glue to slick back his hair.

Paula Deen was fired from the Food Network for admitting to using the N-word once in her past. First of all, although most Americans are gigantic pansies that won't admit it in public opinion polls, a lot of us have used that word in one context or another. Should we all be fired from our jobs for it? Let's ask Oprah. She believes that people need to let the "dust settle" before they can have a "real conversation" about racism in today's world. Well let's see, we've had almost 400 years since the first slaves landed in Jamestown, Va. How about, say, now? Deen's comments are completely useless in the wider debate about racism in this country, and only when there's a real conversation about it, will we all understand why.

Dennis Rodman's going to North Korea to coach a squad of basketball players, and human rights advocates are all pissy about it. According to Rodman, "I'm just going over there to do a basketball game and have some fun." But apparently, if a man who has worn a wedding dress in public decides he wants to travel somewhere that is fraught with controversy on his own free will, he's sending some kind of message that condones human rights abuses. Right, because if we all took our cues from Rodman, we'd all dye our hair red, hit our significant others, and head-butt referees.

Barbara Walters is only on this list because the veteran broadcaster, who has interviewed some of the world's most amazing people, has listed Miley Cyrus as one of her "Most Fascinating People of the Year," alongside Hillary Clinton. I guess if you find a twerking singer to be "fascinating," then you should read more about the list here.

The Real Housewives of Beverly Hills cast member Brandi Glanville apparently made fun of a housemate for not being able to swim because she was black. When commenting on the issue, Glanville said, "All my black friends can't swim, is that bad?" Despite how blatantly dim-witted this woman is, and how undeserving of any media attention whatsoever her comments were, people were quick to jump on her on Twitter. This is yet another example of how voyeuristic we are, always wanting to peer into other peoples' lives, and then slamming the ones who are easy targets to make ourselves feel important when they say something we don't like.

When you tweet to Rihanna, saying that Chris Brown beat her because she isn't pretty enough, or to the rapper Drake, stating that you want him to "murder [your] vagina," you're gonna stir up some trouble. But why does it matter? As ridiculous as the tweets are, they have no bearing on anyone's day-to-day life, so why get mad about anything Amanda Bynes says? Oh, and she just might be certifiable, so there's that.

Lil' Wayne, like many other rappers, survives on controversy. So it should be no surprise that he caused quite a stir when he was filmed trampling an American flag while shooting a music video. One Twitter used claimed, “lil Wayne your dead to me” about the incident. If we spent less time getting angry about a guy with zero political authority, and more time learning how to spell and capitalize proper nouns, we'd be a lot better off as a nation.

He spits, he visits strip clubs, he urinates into mop buckets — that's right, Justin Bieber's a kid who does stupid things just like any other kid, and yet people get mad at him for it. We've all done stupid things, and just because you're an international superstar doesn't mean you aren't allowed to make the same mistakes. Apparently some parents think that it's Bieber's job to raise their children.