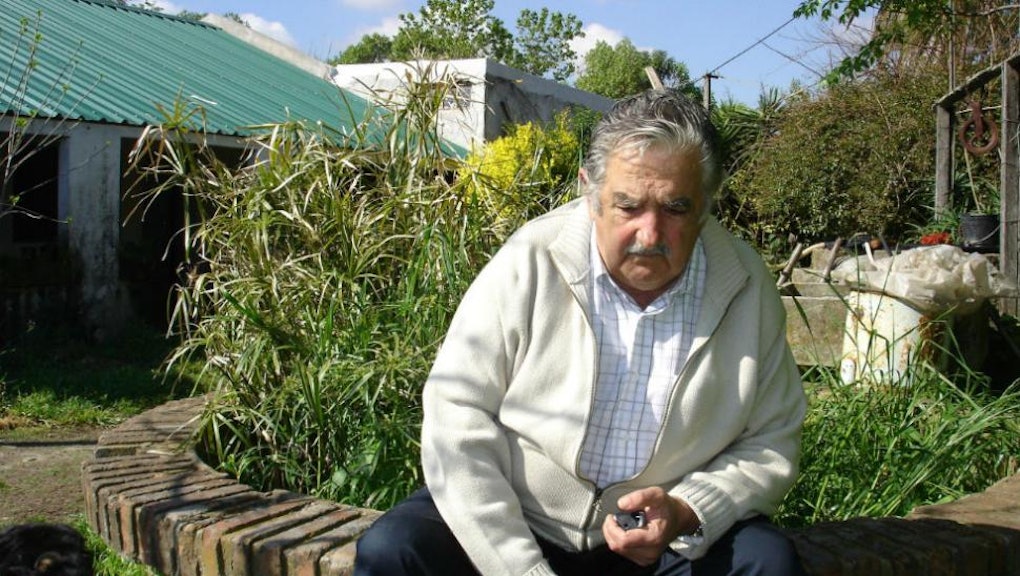 José Mujica is the president of Uruguay, but you wouldn't know it from looking at him. Sometimes called the world's poorest president, Mujica, who took office March 1, 2010, has donated about 90% of his $12,000 monthly salary to charities benefiting the poor and entrepreneurs.

Unlike other heads-of-state who don discreet butlers, fleets of yachts, and wine cellars with vintage Champagnes, Mujica lives a simple life in the home he's occupied for years.

Take a look for yourself.

Mujica sits between his Vice President Danilo Astori and newly-appointed Finance Minister Mario Bergara. An atheist, Mujica has led Uruguay to legalize marijuana and same-sex marriage while enacting one of the region's most sweeping abortion rights laws.

As a guerrilla fighter for Tupamaros (a "Robin hood" organization that stole from the rich and gave to the poor) he was imprisoned twice, escaped once, and was only apprehended after being shot six times by the police. He was released 14 years later when a constitutional democracy was restored in Uruguay.

This is Mujica's home. Instead of living in the Uruguayan presidential palace, he chose to stay in the place where he and his wife have lived for years. On their property, they grow chrysanthemums that they sell in local markets.

Mujica chooses to drive himself around in his 1987 Volkswagen Beetle which, until he added half of his wife's assets (land, tractors, and a house), accounted for the entire value of his declared wealth: $1,800.

Mujica shortly after his election win in 2009 with his wife Luciá Topolansky, who is now also a Uruguayan senator.

And here he is with Steven Tyler and Joe Perry of Aerosmith because ... well why not?