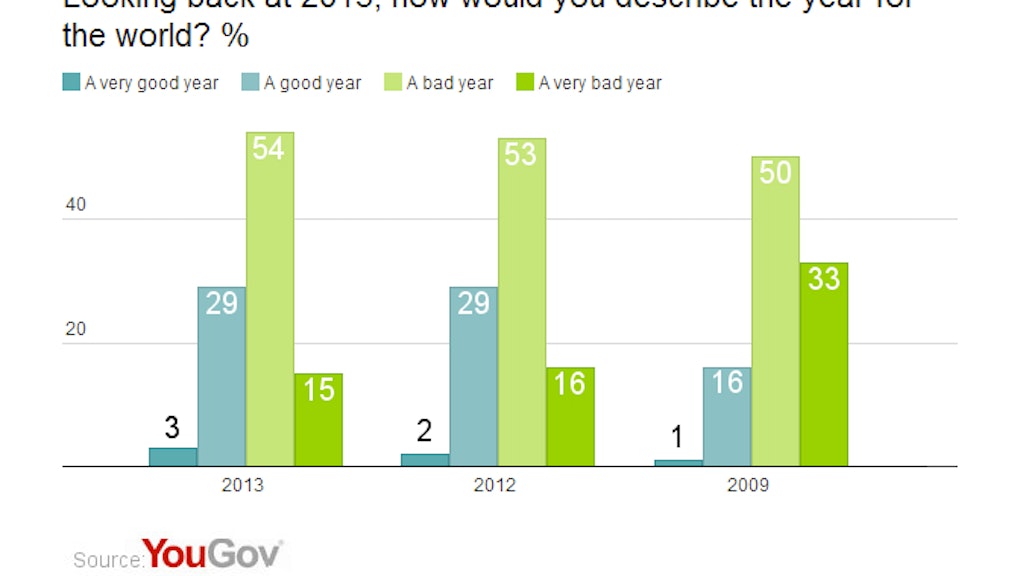 The news: A majority of Americans won't be sorry to see the end of 2013. As it turns out, 54% of Americans describe 2013 as a "bad year" for the world, and another 15% call it a "very bad year." That means nearly 70% of Americans will say "good riddance" to the year come Tuesday night.

A lot depends on demographics. The younger you are, the more likely you are to have a positive outlook on 2013. For example, roughly 75% of Americans under the age of 30 describe 2013 as a good year for their families. And, of course, a lot depends on money. Only half of Americans with incomes less than $40,000 describe 2013 as a good year, but almost 75% of Americans with incomes over $100,000 will remember 2013 fondly.

So why was 2013 such a downer for so many Americans? Well, maybe it has something to do with that only 16% of Americans say they're better off financially than a year ago — and one-third claim they are worse off.

But let's think about the major news stories of the year. America kicked off 2013 with pretty much the worst thing possible — the Newtown school shooting came at the very end of 2012 and carried into this year — and never turned things around. The summer started off with the National Security Agency leaks. The fallout from that caused Americans' faith in their government to be shattered. And did America get a reprieve in the fall? Nope. First there was the government shutdown that was a two-week exercise proving how useless the federal government really is, and then, hot on its heels, was the disastrous rollout of the Affordable Care Act. It's no wonder a majority of Americans gave bad reviews to President Obama and Congress, which sat on its hands all year.