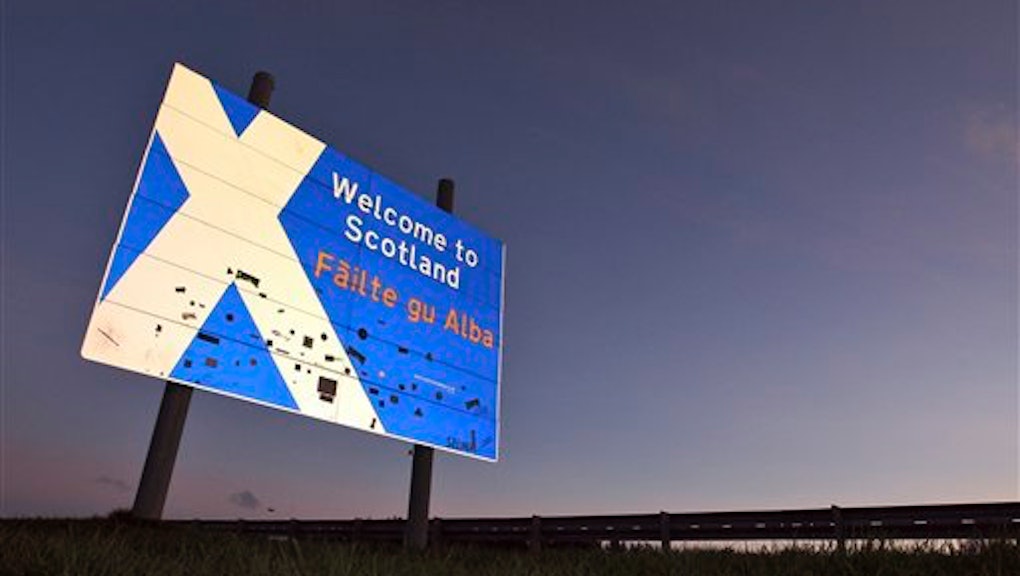 Sophie, a 15-year-old of St Andrews, Scotland, already cast one ballot on the matter of Scottish independence in her school's mock election. But next September, after her 16th birthday, she'll cast another. That time, it will be the real thing.

It's been six months since Scotland lowered the voting age in time for September's referendum on independence from the UK, extending the vote to 16 and 17-year-olds for the first time. People throughout the UK and the U.S. are watching to see if this might be the solution to the western world's voter turnout problem.

The pro-independence governing Scottish National Party led the charge to lower the voting age, some say motivated by the belief that young Scots would be moved more by patriotic passion than the older generations. Just think of Mel Gibson's iconic bellow in Braveheart. But the measure ended up passing on June 27 with the support of the Labour Party and the Liberal Democrats.

Meanwhile, the next challenge in the lowered voting age is ensuring that teenagers take advantage of their new right. Liam O'Hare, a 24-year-old Glaswegian, recently started working with the city council to register and engage young voters in the referendum.

"If you're old enough to get sent off to war and to pay taxes, of course you should be able to have the vote," O'Hare said.

The Electoral Reform Society, which campaigns for lower voter eligibility age throughout the UK, believes greater youth participation in the voting process will encourage politicians to show more accountability to young folks while in office.

"Russell Brand says voting just encourages them," Willie Sullivan, Scottish director of the Electoral Reform Society, said, referencing Brand's October interview. "But it seems a bit silly to give up the tiny bit of power that people have."

Long an initiative of the Liberal Democrats, the lower voting age was embraced by the Labour Party when leader Ed Milliband announced at an October conference that enfranchising 16- and 17-year-olds would make them "part of our democracy."

"If you get people engaged in politics at that stage in their life, they're more likely to stay engaged," Sullivan said.

Indeed, lowering the voting age could well be the remedy for the atrophying civic involvement that plagues advanced democracies around the world. Voter turnout for the UK's 2010 general election was just 65.2%.

According to Dr. Peter Levine of Tufts University, who heads the Center for Information and Research on Civic Learning and Engagement, "Voting is habit forming." And it can be hard to pick up good habits at the same time you're leaving your family, home community, and mandatory social studies classes.

"Eighteen may be a bad year to start that habit because a lot of people have just had their lives disrupted," Levine said.

Besides creating a habit of civic engagement, research shows instituting younger voting ages helps increase turnout among older voters. When kids go to the polls, their parents come along.

The concept isn't foreign in the U.S., though it hasn't been put into practice much. In Iowa, those under 18 get to vote in primaries if they'll be of age by the election, and just last month, 16 and 17-year-olds voted in the Takoma Park, MD. municipal elections.

The significance of Scotland's upcoming referendum goes beyond determining the outcome on independence. It could help reverse the long-standing voter apathy in western democracies.