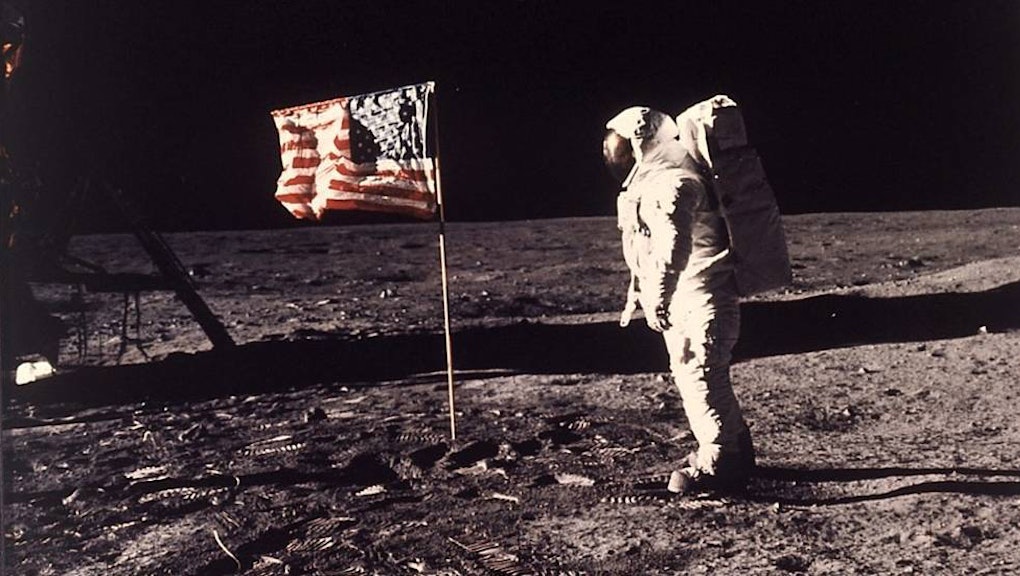 Scientists Are Now Pushing Congress to Return to the Moon

China's historic Chang'e 3 unmanned lunar landing is turning some heads in the American scientific community, many of whom think the country that put Neil Armstrong on the moon has lost the lead in lunar science.

The Lunar Exploration Analysis Group (LEAG) wants us to return to the moon, and they're not afraid to let Congress know. LEAG is organizing a letter-writing campaign to petition Congress to let them know there's an awful lot remains to learn about the moon, and that we need to send more manned expeditions as soon as possible.

The "Destination Moon" campaign has a simple goal: "Use the moon to create a sustained human space-faring capability, advancing exploration of the Solar System." And they've made some flashy flyers to make their argument:

There are some pretty compelling arguments in favor of re-igniting NASA's long-defunct lunar program. As the closest celestial body, the moon is an ideal destination to test new spaceflight technologies. A new program to send more astronauts to land on the moon would require new and improved technology, spur public and private innovation, and require the U.S. to form scientific and diplomatic partnerships with other countries.

In short, it wouldn't just be cool. It's crucial to the scientific community's long-term space exploration goals.

"The brief Apollo missions were terminated before we could start investigating the requirements for longer term missions away from Earth," Stephen Mackwell, director of the Lunar and Planetary Institute in Houston, told SPACE.com.

"Before we set off to distant destinations, like Mars, it makes sense to use our nearest near-Earth object — the moon — as a test-bed to see how humans will cope with longer duration periods distant from Earth, including on the surface of another planetary body, and how effectively we can make use of in-situ resources to sustain our presence elsewhere," Mackwell said.

And the push to go back to the moon has another big backer, Rep. Frank Wolf (R-Va.):

"As China prepares to send a series of increasingly advanced rovers to the moon in preparation for what most observers believe will ultimately be human missions, many are asking why the U.S. is not using this opportunity to lead our international partners in an American-led return to the moon," Wolf wrote in a Dec. 19 open letter to the White House.

According to Wolf, President Obama's "recalcitrance in leading a lunar mission is creating a crisis of confidence in the U.S. space program, both at home but also among our partners, including Europe, Canada, Japan and Russia." He further called for a "lunar-focused human exploration program that will reaffirm America's space leadership for the 21st Century."

Mike Gold, a business and operations director for Bigelow Aerospace, told SPACE.com that the moon was an "unparalleled commercial opportunity," but didn't have high hopes Congress would take action.

While the future of American lunar exploration hangs in the balance, it's not like NASA has been sleeping on the job. This bizarre NASA project, the Super Ball Bot, could be the prototype that eventually becomes the next interplanetary rover:

What better place to test it than the Moon?