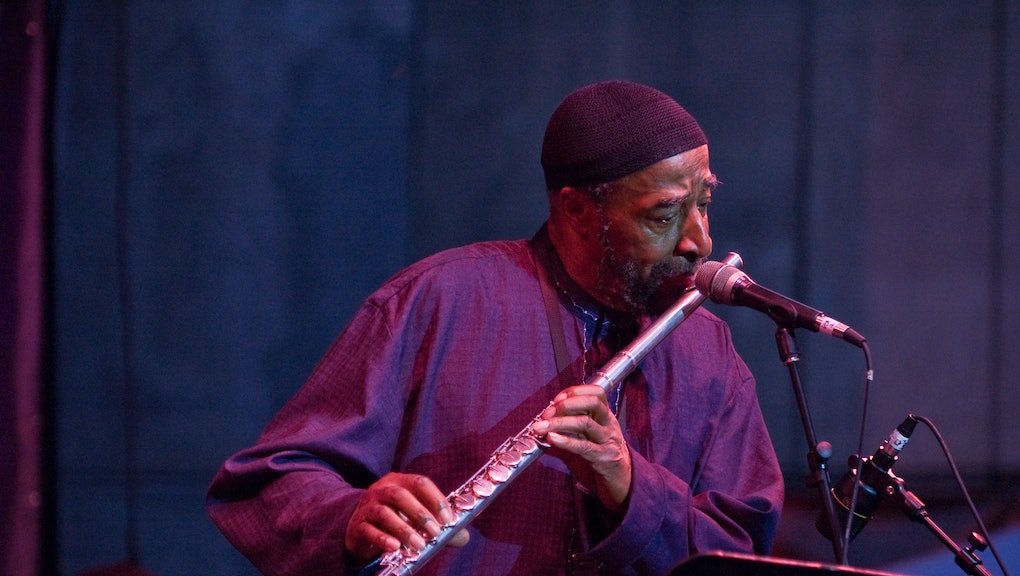 "World music" is a genre that can mean everything and nothing. It's used to label pretty much all non-western-sounding music, making the category essentially meaningless.

But if there were one man who could crystallize that all important yet always elusive genre, it was Yusef Lateef, who died last Monday at the age of 93. Lateef was a musical visionary who began his career as a jazz saxophonist and soon carved out a career across decades, genres, and countries. His tireless cross-cultural efforts brought eastern influences into jazz and western grooves to all corners of the world. Yusef Lateef is world music. He is a standard bearer for the next generation of cross-continental, cross-cultural innovators as popular as M.I.A., and his musicianship and radical humanism will be sorely missed.

Lateef was born in Tennessee as William Emmanuel Huddleston. He rose to prominence in the jazz world at a time when an astounding crop of saxophonists — including John Coltrane, Sonny Rollins, and Ornette Coleman — were rewriting the rules of the instrument and the genre. Lateef didn't have the technical virtuosity of any of those three, but he shared their unending ambition and experimentation. While Coltrane turned inward, shredding on his horn for weeks on end and obsessively exploring modal jazz, Lateef looked across the world: He began exploring eastern sounds and melodies before it was fashionable. He added classical western instruments like flute, oboe, and bassoon to his repertoire, but also the bamboo flute, snai, shofar, and koto, to name just a few.

Lateef shows that music, no matter its origins, can convey powerful spirituality and beauty.

The 1957 recording "Before Dawn" is a rare glimpse of Lateef embarking on his global musical journey. His melody is passionately bluesy and simple; however, the groove is pushed forward by offbeat slithering drums and the plucking of a rebab, a centuries-old instrument from the Middle East. This eastern inflection is much more than cultural appropriation: It's a lovingly and carefully constructed soundscape, and above all, a soulful, trance-like five minutes of music.

Lateef would continue to explore his many global influences within the blues, a uniquely American form. Albums like Prayer to the East and Part of the Search, exhibit his quest to understand and embrace sounds from around the world and meld them with his own musical upbringing. He traveled across the Middle East and Asia, and even spent four years teaching and studying in Nigeria.

Lateef shows that music, no matter its origins, can convey powerful spirituality and beauty. One only has to listen to "Like it Is," another blues chart, to hear how deeply he feels the music. He builds with stirring emotiona, first starting with strings, then a pneumatic flute, and then finally his mournful saxophone. He forces emotion into and out of every single instrument he plays, weaving in and out of western and eastern phrases with such grace that it's impossible and pointless to compartmentalize his influences.

The music that was associate with "world music" today — from Ladysmith Black Mambazo to Bombino — may sound nothing like Lateef's blues, but it all inherits his quest to build bridges and convey universal emotions. His vision will spill out of every musician who travels overseas to expand their outlook and creativity — he showed us that all music, wherever it originated, was at home anywhere in the world.