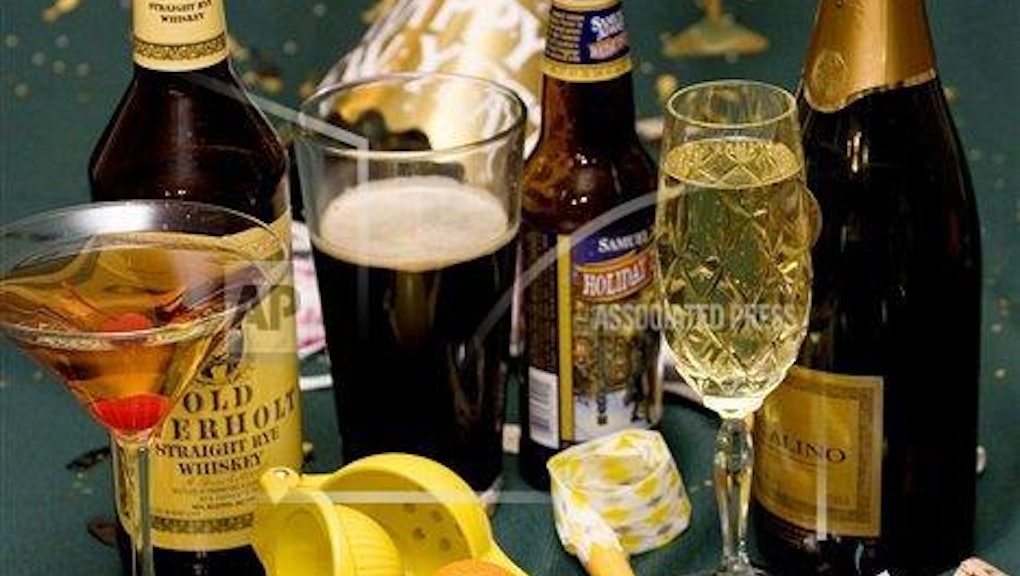 The Biology of Booze: How to Outsmart Your Hangover

At one time or another, most of us have spent time worshiping the porcelain god after a good time turned bad. Instead of reading another list article telling you to drink water to avoid a hangover, let's get into the science of alcohol's effects on your body.

You know how when you drink, you sometimes have monumental thoughts that clarify everything in your life and the world just makes sense? It's because alcohol disturbs your brain chemistry in a way that throws off the balance of your cognition. It's also why drinking is relaxing and fun.

The neurons that make up your brain use small molecules called neurotransmitters to communicate to each other to form what we recognize as thoughts. The two types of neurotransmitters affected by alcohol are glutamate, which is excitatory, and GABA, which is inhibitory. Alcohol cranks up the inhibitory molecules, while lowering the excitatory response.

This new ratio of neurotransmitters causes the brain to think in a totally different way. Because you have less of an excitatory signal, the background of your thoughts quiets down. So you no longer care that you might say something stupid, that your boss is a jerk, or that your bills are due soon. The increase in inhibitory signals makes it so you focus on things that seem important to you. Essentially, you're thinking very little, but very deeply ... well ... kind of deeply. Drunk uncle's epiphanies also happen, as does repeating the same thought or idea over and over.

Bless you, designated drivers everywhere, for putting up with this altered state.

Being tipsy is fun, but what happens when you go one too many shots too far and end up swearing you'll never drink again?

Hangovers are undoubtedly horrible and while Yahoo News and the like are telling you to drink more water, that's really not the whole story and can land you in awkward vomitville on your New Year's Eve (or New Year's day).

While water does help with dehydration and presumably slows down your chugging of champagne, it's not the cure-all for a hangover because it doesn't do anything to speed up the breakdown of alcohol into acetate.

But, you're not screwed. There are some tricks to combat a hangover.

Little sparkly New Year's Eve dress, be damned: Eating fat and carbs should be a part of your pregaming routine. The fat slows down the absorption of alcohol because fat take a lot of your body's resources to digest. This means it takes longer for the alcohol to get to your liver, allowing time for it to be turned into harmless acetate. The carbs raise your blood sugar, which keeps nausea in check.

Ok ... I have to say it: Drink water. Alcohol causes your body to be unable to absorb water very well and so it steals water from your brain leaving you a pretty nasty headache. It's really important to be well hydrated before you start drinking because your body is processing water normally then, but keep drinking water during and after drinking.

After you've stumbled home, take an aspirin, but never Tylenol. Aspirin is the best choice for two reasons: it stops prostagladins, a byproduct of fats, which plays a role in hangovers; it doesn't have caffeine, which would further dehydrate you. Tylenol is a bad choice because it's really harsh on your already hard-working liver and contains caffeine. Some experts say that even taking aspirin for your hangover might be a bad idea, so that one is up to you.

If your night has lasted until morning, have some eggs, a banana, and fruit juice. The eggs contain cysteine, an amino acid, that helps break down alcohol. The banana is rich in potassium, which is really important for your brain and muscles that have been through the ringer. The fructose in the fruit juice will help your body excrete the toxic acetaldehyde that may have built up in your body.

Sometimes science helps you party without barfing, and I'll drink to that.