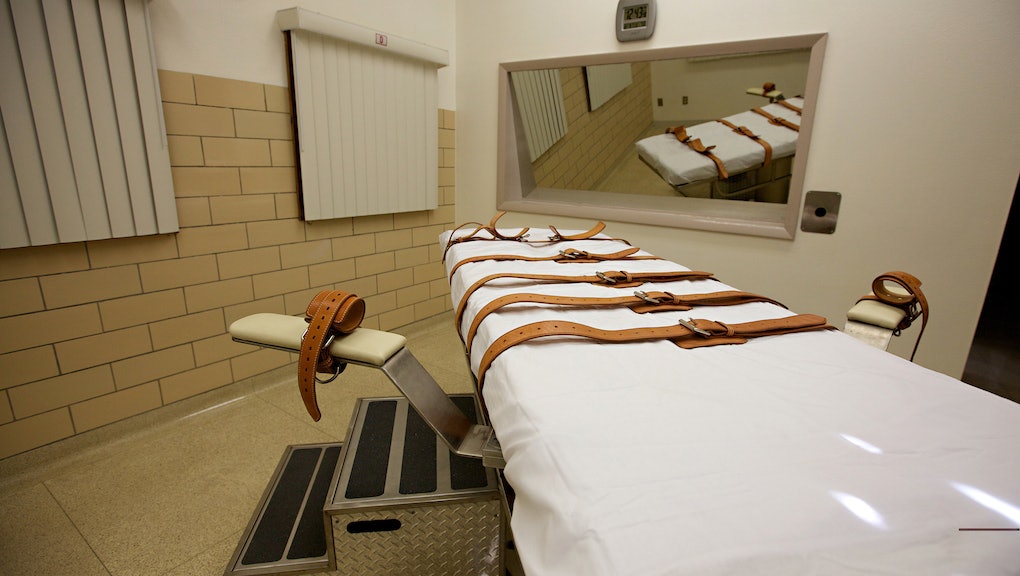 Execution in the U.S. can occur in five ways: by lethal injection, electrocution, lethal gas, hanging, or firing squad. But, lethal injection is by far the most common method employed in the states where the death penalty is legal.

In 2013, 39 people were executed in America. Thirty-eight of them were killed by lethal injection — all but one: a man who requested electrocution, which is not typical.

There is not, however, a good chance you'd be killed by lethal injection the way it was intended to be carried out. Medical experts had formerly delineated a highly specific method to perform lethal injection called the "three-drug protocol" which consisted of: sodium thiopental, a barbiturate anesthetic, followed by pancuronium bromide, a paralyzing muscle relaxant, and finally, potassium chloride, to stop the inmate's heart.

In 24 of the 38 lethal injection execution cases below, only one drug was used. Not only did fewer than half receive the three-drug protocol, but they also did not even receive a lethal dose of a drug from the original list of three.

As the chart indicates, most death row inmates received a single-drug injection of the sedative pentobarbital last year.

According to Orrin Devinsky, M.D., a neurologist at NYU's Langone Medical Center, "The three-drug is more of a guarantee that breathing really stops and no faint breaths prolong life."

Instead, the majority of inmates only receive pentobarbital, a brain depressant, which, like too much alcohol, slows brain activity. At low doses, it starts by acting on higher centers, and then progresses to the brain stem, which controls breathing and arousal. This causes the inmate to become unconscious, stop breathing, and die.

But without the other two drugs, the chance of an execution carried out in a medically-approved way drops dramatically because the paralytic agent also prevents breathing. In other words, when the inmate becomes unconscious, which can stop his breathing by shutting off respiratory centers in the brain stem, his respiratory muscles get paralyzed, which can cause death. The drug hits the same biological function — breathing — from several angles.

Without the three-drug protocol, the chances of a screw-up dramatically increase. This was especially clear during the attempted execution of Romell Broom in Ohio, where executioners tried to kill him for two hours before giving up. To this day, he remains on death row.

According to Richard Dieter, executive director of the Death Penalty Information Center, there is no doctor present to administer the drugs. With Joseph Clark, who was executed in Ohio in December 2006, it took 22 minutes for the technicians to find a vein. Shortly after the start of the injection, the vein collapsed and Clarks's arm began to swell. He raised his head off the stretcher and said five times, "It don't work. It don't work." The curtains surrounding the stretcher were then closed while the technicians worked for 30 minutes to find another vein.

"Screw-ups happen," Dieter said. "This is the one area where doctors come in to play. Often, it's a doctor who finally determines that death has occurred."

Devinsky said, "The main screw-up is under-dosing, so someone looks like they are not breathing but they are actually breathing shallowly and then they don't die, or sustain brain damage but don't die."

Regardless of how you feel about the death penalty, that lethal injection is not being carried out in a medically-sound way is of serious concern.

The mainstream media has raised this issue multiple times in the last couple of weeks alone. In December, Jeffrey Toobin for The New Yorker wrote, "In 1890, the Justices said that the process could not include 'torture or a lingering death.' Accordingly, in 2008, the Court rejected a challenge to execution by lethal injection — the prevailing method in the 35 states with prisoners on death row — because, as Chief Justice John Roberts noted in his opinion, the procedure did not present a 'substantial risk of serious harm.' In other words, death is required, but harm is forbidden. Clear?"

How lethal injection is carried out may directly conflict with that. Toobin continued to argue that while it's understandable that Supreme Court justices have attempted to make the process of killing an inmate somewhat more humane, and while "there is a meagre kind of progress in moving from the chair to the gurney," the fact remains that both "come with leather straps to restrain a human being so that the state can kill him. No technology can render that process any less grotesque."

But there are other issues — logistical and fiscal, rather than moral, medical, or theoretical — at play.

For one, death row is expensive. Dieter estimates that while life in prison costs $1 million per inmate, an inmate's time on death row, which can last for decades, requires extra guards, and entails significantly more legal processes. It costs a staggering $3 million per death row inmate. Moreover, the length of time from sentencing to execution is increasing.

So how did we get here?

Drug manufacturers behind the lethal concoctions of the three-drug protocol have placed sanctions on these drugs because of their use in capital punishment. For example, Hospira Inc., the sole manufacturer of sodium thiopental, closed its plant in North Carolina and attempted to move operations to Italy in 2009. Italy demanded a guarantee that the drug not be exported for use in capital punishment.

Toobin wrote, "What followed was a black comedy of increasingly desperate attempts by prison officials to procure sodium thiopental." In 2012, the FDA blocked it from being imported because the source had not been certified.

Missouri was the first to adopt it in October 2013, and would have succeeded in using an overdose of propofol (a well-known drug used in medical anesthesia — the drug that killed Michael Jackson) to kill inmates had the manufacturer not objected, demanding that its use could lead to sanctions by the E.U. that would threaten the U.S. supply.

Now seven states have turned to "compounding pharmacies," which can obtain and create drugs without FDA supervision. "The risks of these substances being contaminated, or insufficiently effective, are considerable," Toobin wrote.

As the New York Times wrote in late December, "This only underscores the fact that when it comes to the death penalty, the United States is virtually alone in the Western world."

Some states are doing their own thing altogether. For example, Florida and Ohio have resorted to midazolam to carry out executions, despite the glaring irony that this drug was originally intended to help save lives, not take them. State and federal courts are reviewing this process. Its safety, efficacy, and painlessness in execution have not been officially confirmed. Florida man William Happ, 51, was the first to be executed with midazolam. He "appeared to remain conscious" for 14 minutes, which is twice as long as it should take.

So where does that leave us?

States are able to employ their own lethal injection procedures with little federal regulation or medical oversight, and doctors are fighting back. Anesthesiologist Joel Zivot, M.D., wrote an op-ed for USA Today in which he voiced his strong opposition to the procedure. Lethal injection, he said, "creates an illusion of humane, professional execution." In reality, though, "When (states) employ lethal injection, they are not practicing medicine. They are usurping the tools and arts of the medical trade and propagating a fiction."

Nationwide, public support for the death penalty is at its lowest in four decades. Forty percent of people surveyed by Gallup now say they do not believe it is administered fairly. The evidence suggests they are correct.

With little support and ample medical concern, it is time for the Supreme Court to reconsider lethal injection's constitutionality. If the question is whether lethal injection constitutes cruel and unusual punishment prohibited by the Eighth Amendment, its application leaves big questions wide open.

As Dieter said in an interview, "We do know that there is an experiment going on."