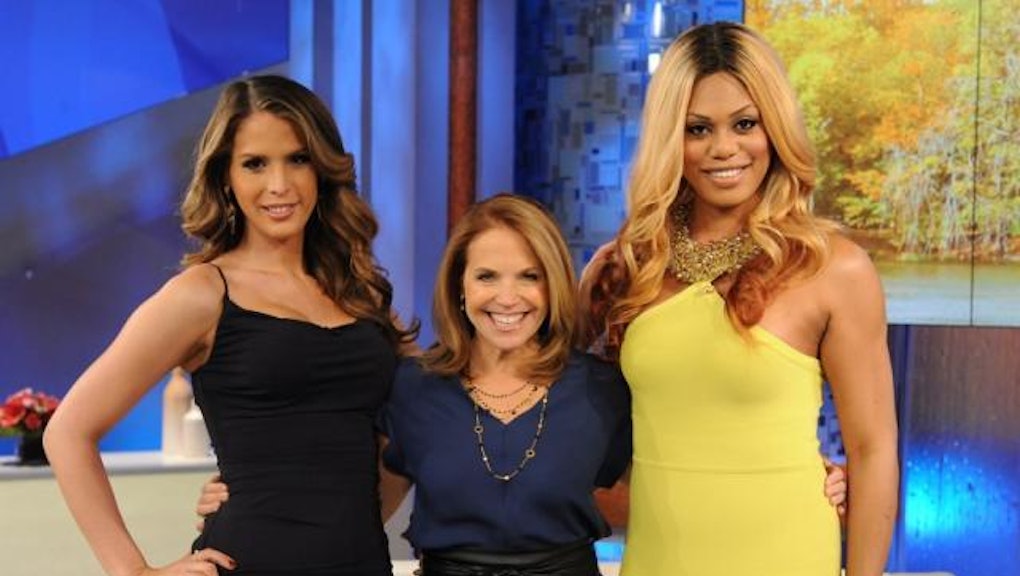 What If People Who Aren't Trans Were Asked About Their Genitals On TV?

Unfortunately, if you're transgender, you don't need to imagine that world — it already exists.

On Tuesday, Katie Couric had two of the most prominent transgender celebrities on her show, and rather than ask them about what it's like to be on the cover of magazines or what it's like to be the first trans woman of color with a leading role on scripted television, she steered the conversation towards their "private parts," and specifically, how unlady like they really are.

Apparently, the highest priority issue on Couric's question list was not to showcase and celebrate these amazing women for their successes, but to dehumanize their very existence.

First, Couric asked supermodel Carmen Carrerra if she has a penis or not (yes that was actually a serious question). As if that weren't enough, she also pushed the 'what does your pipi look like angle' with Laverne Cox.

To the bewilderment of many, the actress handed her a plate of trans awareness on a silver platter of brilliance in response.

"The preoccupation with transition and surgery objectifies trans people," and distracts us from the "the reality of trans people's lives," she calmly said. Cox pointed to the disproportionately high rates of violence and unemployement that trans women face in America. "When we focus on transition, we don't actually get to talk about those things," she added.

Although both celebrities handled #genitaliagate gracefully, it's worth asking why it's acceptable for someone with Couric's status to ask these kinds of ignorant questions — questions that no doubt would be deemed unacceptable for non-trans stars.

Maybe it's because mainstream shows like "Two and a Half Men" or "Mike and Molly" think it's okay to ridicule trans people. Or because a show like "Work It," where the entire plot revolved around transphobia, was considered acceptable on network television. Or because we're flooded with harmful representations of trans people as villains, victims, and sex workers every time we turn on our televisions.

What would happen if non-trans people were asked about what their junk looks like on air? Equally famous celebrities would probably respond a little something like this:

Light-humored as these gifs may be, there's nothing funny about the way the mainstream media treats trans people on national television. Keep these reactions in mind next time you're tempted to ask a trans person about their intimate parts. And remember them next time some media personality deems it appropriate to humiliate and dehumanize a fellow human being on national television.

No one should be reduced to what's inside their pants.

What do you think about Katie Couric's remarks? Harsh? Insensitive? Outrageous? Let me know what you think on Twitter and Facebook.

6 Lesson About Women That Every Republican Needs to Hear